OMAHA (DTN) -- Just three weeks ago, the Leopold Center for Sustainable Agriculture at Iowa State University was celebrating its 30th anniversary with guest lecturers, including some of the former state legislators who helped create the center.

But in a surprise move last week at the Iowa statehouse, lawmakers voted to eliminate the sustainable agriculture research center by zeroing out the Leopold Center's entire funding stream.

Iowa officials started the center, which is named after Iowa native and famed ecologist Aldo Leopold, during the 1980s farm crisis as a way to help educate farmers on alternative crops, livestock practices and conservation. Its programs focus heavily on organics, cover crops and water quality issues within the state. In recent years, the center has also worked on long-term climate research, local foods, soil health and biodiversity. The center also funds small grants to farmers and local projects.

Supporters note that Leopold Center's cutting-edge work may not have an immediate effect, but it eventually has a greater influence on farmers down the line. The Leopold Center, for instance, was championing the benefits of cover crops long before cover crops became cool.

Despite a strong showing of support at a hearing Monday morning, the Iowa Senate voted later that day on an appropriations bill that would eliminate roughly $1.5 million that goes to the Leopold Center and shift its funding to the Iowa Nutrient Research Center, which was created by the state Legislature in 2013. The Iowa House of Representatives followed suit on Tuesday.

In a debate, some lawmakers argued the center had fulfilled its mission, or that there is so much other research taking place that the consequences of losing the Leopold Center wouldn't be that dire. Others argued that not every farmer in Iowa has thousands of acres of land. The center has helped those who farm with fewer acres and organic farmers. Furthermore, the conservation research coming out of the Leopold Center has helped farmers statewide.

The votes to terminate the sustainability center came just days before the 69th anniversary of Leopold's death. The legislation now goes to Iowa Gov. Terry Branstad, who actually signed the original law in 1987, creating the Leopold Center.

"We were blindsided by this," Mark Rasmussen, director of the Leopold Center, told DTN. "We don't know where this came from."

The center survives on a tax set on fertilizer, which generates roughly $1.5 million that goes to the center, as well as a $397,000 line item from the Iowa Board of Regents. Under the legislation, both of those funding streams would be eliminated.

Aaron Lehman, president of the Iowa Farmers Union, also serves on the advisory board of the Leopold Center and testified Monday before the Legislature to save the funding. The center had a lot of support at the hearing, he said. Lehman said eliminating the center "would be a devastating blow to the work of family farmers in Iowa."

Lehman noted that family farmers are facing more financial stress and looking for some innovative solutions to stay in business. At the same time, farmers are being asked to do more to address issues such as water quality in the state.

"So as both of those things are happening, we're taking tools out of their tool box," Lehman said. "All of the great research that comes out of the Leopold Center focuses on on-the-farm practices. And the board that oversees the research and helps guide the research is made up of a broad spectrum of farmers. It's very farm and field focused, and this is absolutely the wrong time to take that innovation away from us."

Lehman noted that farmers union leaders in other states often talk about the work of the Leopold Center as well. An Iowa State University archive website shows that studies and reports from the center have been downloaded more than 25,000 times.

"It kind of goes back to politics. It was one party who set this up, and even though there are many, many positive things that developed, the other party thinks things should be changed," said Doug Gronau, another farmer from Vail, Iowa, who chairs the center's advisory board. He added, "The Leopold Center has done a lot of good things. Some of the things they have done are not necessarily politically appealing to a lot of folks, and that's the gist of what is going on here right now. It really does not have a lot to do with the amount of money they are asking for, or even the effectiveness of it."

Gronau said the center's work on crop production and water quality became the basis for Iowa's nutrient management strategy. Tile line buffers and wood chips for bioreactors were among some of the early items studied by the Leopold Center to address water quality, he said.

"The original grants that the items in the strategy had, probably 80%, were mostly started by the Leopold Center," Gronau said. "The tile line buffers -- this was stuff that was totally unheard of. It was unnecessary, why are you doing this? Well now, it's a tool in the toolbox to reduce nitrates. It's these types of things that the Leopold Center is known for."

Citing the various work by the Leopold Center, Gronau said he thinks state officials are focused on other issues involving the center. "I think the old saying is, 'throwing the baby out with the bath water,' and I hope they don't do that. I hope they recognize the positive things that the Leopold has done without getting politics involved."

Gronau is also the Iowa Farm Bureau representative on the board, but Laurie Johns, a spokeswoman for the Iowa Farm Bureau Federation, said, "Iowa Farm Bureau doesn't have a policy on funding the Leopold Center, so we are staying out of that budget discussion at the Statehouse. It's up to lawmakers to make hard decisions and how it all goes at the end of the day is up to them. Our goals remain the same as in recent years: to seek fair, sustainable increased conservation funding to continue to momentum that is underway in the Water Quality Initiative."

Despite having to potentially find new jobs at Iowa State University for most of his staff, Rasmussen said he has been pleased by the public support that generated a lot of social media and a petition supporting the center in just about one week's time. Further, there have been editorials in Iowa newspapers and op-eds from former and current students.

"They jumped out there on Facebook and Twitter and other social media and did a really great job in one week's time," Rasmussen said.

Rasmussen added that eliminating the funding for "sustainable agriculture" won't curb the growing drive and focus on sustainability that was just beginning to develop when Iowa took a leap to create a center focused on the concept.

"The movement on sustainability is going to continue, and it is needed," Rasmussen said. 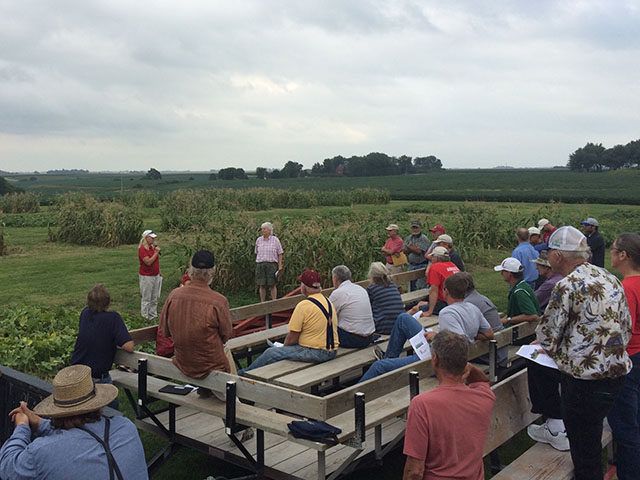