ARLINGTON, Va. (DTN) -- Agriculture and rural America have "the greatest opportunity in the history of this country" to change policies for the benefit of American farmers, the president of the American Farm Bureau Federation told agricultural economists and policy wonks.

Zippy Duvall, a Georgia farmer, spoke Thursday night at the USDA Outlook Forum about the opportunity President Donald Trump's election provides for farmers. But he also said the potential changes to regulatory issues, tax reform, immigration, farm policy and trade require farmers to remain "engaged" even though the election is over.

Regarding the best times, Duvall said Trump chose an excellent nominee for Agriculture secretary in former Georgia Gov. Sonny Perdue, a personal friend of Duvall's, who also hails from Georgia. "He knows how to work with people. He is a fine gentleman and a great Christian. And he is a veterinarian. We as farmers talk a lot about sound science. Well, a veterinarian is a scientist and he is going to understand those issues."

Perdue also had a grain business where he sold grain both domestically and internationally, Duvall said. As a governor, Perdue also has experience in trade missions.

Perdue is waiting for a confirmation hearing by the Senate Agriculture Committee. If confirmed, Perdue will be the only Agriculture secretary who farmed in his adult life, Duvall said. "If you have any questions about this man, you need to put them out of your mind. You are going to enjoy working with him."

Duvall laid out the American Farm Bureau Federation's major priorities, which include regulatory reform, immigration, tax reform and trade, he said. Regulatory reform marks, "the best times we think with this administration. This president talks our talk. For many years, agriculture has been burdened and overburdened with regulatory reform, especially with EPA, so he speaks our language."

Duvall said Farm Bureau is excited about new EPA Administrator Scott Pruitt. "We think he has a lot of common sense to him and wants to interpret the law as written, and we think that's a good thing."

Duvall noted the Clean Water Act was an important piece of legislation in cleaning up rivers that would even catch fire before the legislation was passed. Unfortunately, Duvall said, the Clean Water Act, Clean Air Act and Endangered Species Act have transitioned over time "into something that's burdensome and strangling our economy, and need reform."

The waters of the U.S. rule under the Clean Water Act is a rule the Farm Bureau is focusing its attention on repealing. If the rule becomes reality, it would require farmers to get permits on millions of acres of land that currently do not require permits to farm. "So we are really concerned about what is going to happen in that area, and we are really excited about what our president said is going to happen with that legislation," he said.

Duvall talked about the risks before the election of overregulation, pointing to a California farmer, John Duarte, who was sued by the Army Corps of Engineers for plowing a field for wheat. Duarte now faces a possible multi-million-dollar judgment against him. "That is so dangerous to agriculture and across America," Duvall said.

Duvall also was positive about the opportunity for tax reform. He cited the opportunity to eliminate the estate tax, saying it is a sad thing to see a farm family selling off assets just to pay estate taxes after the parents pass away. Yet, Duvall said farmers may lose in a trade-off by giving up cash accounting or extensions for a small cut in taxes. "But we need a code that encourages farmers to grow and thrive, and we definitely need a code that encourages the next generation to stay on the farm," he said.

However, Duvall also said Farm Bureau has some concerns about the potential impact of a border adjustment tax. The tax would be tacked on imported products. "We're still studying that tax reform, and we're hoping some common sense comes to that area. We want to make sure it doesn't roll over into a trade situation and cause a trade war that would not be good for anyone in agriculture," Duvall said.

Immigration is an area where farmers could differ with Trump. Duvall said if immigration policy isn't done correctly, Farm Bureau's estimates forecast it could cost more than $60 billion in agricultural production across the country. About 50% to 60% of farm workers are undocumented, and if they left, it could cost a 5% to 6% increase in the cost of food across the country.

Farm Bureau supports securing the border and supports what the Trump administration is doing now in immigration, Duvall said. The issue of border security has been a major stumbling block to other immigration issues. "We're excited about this president talking about that because we are ready to get rid of that excuse," Duvall said.

As a country, immigration reform is needed, Duvall said, which Farm Bureau sees as an opportunity to create a new guest-worker program that Farm Bureau wants to see run by USDA. "I know that's a big change, but we would like to have it in a department that cares about agriculture and understands agriculture and the sensitivities around seasonal times around weather, and everything that goes around planting and harvesting crops," he said.

Duvall also said Farm Bureau would like to see some change in legal status for long-term workers who are already in the country working on farms. He called it a humane issue and a safety issue because many of these workers are veterans on the farm running the machinery.

Regarding trade, Duvall noted the tough talk going on. Duvall said American farmers and ranchers "appreciate our Mexican consumers, we really do." There are some concerns about the North American Free Trade Agreement, but the business relationships in Mexico have been good for U.S. farmers, he said. "We want to make sure that in this renegotiation of NAFTA that we realize the gains we have had there and maintain those gains and be able to even do better," he said.

Looking at Canada, Duvall said Farm Bureau would like negotiators to look at high tariffs Canada has placed on some U.S. products and the fact Canada has sided with the European Union on geographical indicator rules for products. Further, Canada has a habit of giving lower grades to U.S. wheat compared to Canadian wheat. Mexicans also place pest restrictions on certain U.S. crops and also restricts biotechnology planting.

When it comes to trade, Duvall said farm groups have Trump on record regarding his support for American farmers in trade, despite pulling out of the Trans-Pacific Partnership.

The trade issues are another reason to get Perdue confirmed, Duvall said, "Because I know for a fact he's going to stand up and talk about how trade needs to have some attention to it when it comes to talking about these trade deals, and agriculture will be on the front-burner with it." 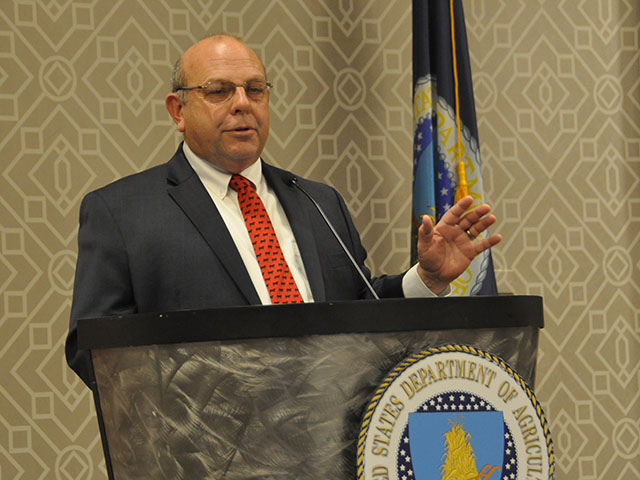