WASHINGTON (DTN) -- Tom Vilsack keeps a set of index cards with him that detail changes made to the U.S. Department of Agriculture under the Obama administration.

"These cards represent, I think, significant progress that has been made in every single mission area, and some that didn't exist before we got here such as a Rural Council," the Agriculture secretary told DTN in an interview just before the election.

Vilsack will end his term as President Barack Obama's longest-serving cabinet member, having been nominated eight years ago next week by Obama to run USDA. Winding down his tenure, the secretary is keynoting dinners where he will be the guest of honor -- such as a U.S. Global Leadership Coalition event later this week in Washington. And, last week, Vilsack saw his official portrait unveiled at USDA as well.

Managing implementation of two farm bills, USDA under Vilsack worked aggressively to create opportunity in rural America by championing investments in a bio-based economy. That went from biofuels to plastics and industrial products that used renewable products to replace petroleum, for instance. That led to efforts to get federal agencies to use bio-based products, including military fuels.

Yet, despite helping create a Rural Council to help champion federal efforts in rural America, election hopes for Hillary Clinton were partly undone by rural voters. The secretary tried throughout the last year to encourage the Democratic Party to do a better job of talking to rural America.

"Democrats need to talk to rural voters. That's the first thing that has to happen. They can't write 'em off," Vilsack told his former adviser, David Axelrod, in a podcast interview during the Democratic National Convention in July. The secretary warned there was a price to pay for not talking to rural Americans.

"They can't ignore them. They actually have to spend a little time talking to them. They have to basically start the conversation with 'Thanks. Thank you for what you do for us.'"

Vilsack said at the time the country as a whole needed to recognize that "the food we eat, the water we drink, the energy we use and a significant percentage of the military we rely on comes from rural America." And the secretary also told Axelrod, "If you go out to rural areas as a Democrat and say 'I'm here to listen, I'm here to thank you, I'm here to kind of educate you on what we're doing for you and with you.' You aren't going to win those rural areas, but you aren't going to get killed in those rural areas."

While the rest is history, Vilsack has reiterated his point that Democrats need to rethink how they work and campaign in rural America. He has stressed that Democrats must rebuild grassroots organizations.

For most of Vilsack's tenure, he could tout high farm incomes, rising land values and record exports. That has all come to a crashing halt over the past three years. Farmers have still seen the best eight years for exports, but production is up globally and it's still a weak overall global economy. Vilsack indicated farmers add to the cycle by pressing for more production individually.

"When you have record supply and less demand, you are going to have lower prices. For the life of me, I know it's incredibly temping when prices are high to go 'Geez, if I just produce 10 bushels more or if I just take that 40, or if I just add a few more cows' -- You don't think anybody else is doing that. So, obviously, that is the challenge," he said.

Vilsack's tenure marked long battles over issues such as country-of-origin labeling that led to him eventually conceding COOL needed to end. He tried to change the beef checkoff only to be blocked by Congress. And battles over biotechnology changed the food industry, trade disputes and led to an eventual law to create disclosure for foods with ingredients from genetically modified crops.

Regarding his own work at USDA, the secretary also has told DTN he won't leave his office thinking he has left any major items undone. "I don't leave here with any regrets."

"We have resolved these long-standing, bitter class-action suits. We tried to help several hundred thousand Hispanic and women farmers get some measure of justice. None of that was happening before we came here," the secretary said.

Yet the House Oversight and Government Reforms Committee last week took USDA's Forest Service to task for complaints over sexual harassment. The committee heard testimony that the response to reports of sexual harassment and discrimination largely got "lip service" from USDA's top leaders, including Vilsack.

Vilsack takes umbrage to claims that USDA doesn't respond to such issues. In 2010, Vilsack was under the political microscope over the resignation of Shirley Sherrod after the website Breitbart posted an edited a video that appeared to make it look like Sherrod -- who was then Georgia's director for USDA Rural Development -- had made comments during an NAACP meeting about being unwilling to fully help a white farmer. In reality, Sherrod, who is black, was trying to explain in her speech that poverty, not race, was the major challenge facing people she served. Media and officials later realized they had been duped by Breitbart's excerpt. Vilsack apologized to Sherrod because his assistants had forced her to resign.

Vilsack notes that out of the Sherrod debacle came a new Rural Development effort called "Strike Force" that has invested close to $25 billion in some of the country's poorest counties. "Because we did what you do in a circumstance like that," Vilsack said. "We created opportunity."

The secretary wasn't exactly embraced by farm organizations at first, but respect was developed over time. Vilsack became a regular keynote speaker at major events attended by production farmers. Over time, Vilsack developed a friendship with Bob Stallman, who was president of the American Farm Bureau Federation until earlier this year. Stallman said the two found themselves working together a lot on trade, the farm bill and regulatory issues.

"We were always very honest and open with each other on things we thought would work, things that wouldn't work and conversations on how to make things work, in many cases," Stallman said. "I was always impressed by the fact that he basically had the interests of rural America and agriculture as his No. 1 interests. Now, he had to get through a lot of minefields and a lot of competing interests to make things happen, but it was always in the context of trying to move the ball forward. He also never at any time told me he would do something where he didn't follow through."

Stallman said what most people don't get to see is the work Vilsack did behind the scenes, such as on trade. "On GMOs with China is one in particular where he has worked with these other governments to try to persuade them of a more commonsense approach to try to open up markets," Stallman said. "For those of us who knew about this and watched him, I think he definitely has earned people's respect because of that."

Vilsack and Stallman worked close enough that when Vilsack's wife, Christie, chose to pass on a White House state dinner, Vilsack invited Stallman. "We had a good time," Vilsack said. "We laughed about the fact he was my date. We went through the photo line where you show off your gown or your tuxedo and we had a good time."

At a ceremony last week, Vilsack's official portrait was unveiled where several current and former officials spoke. House Agriculture Committee ranking member Collin Peterson, D-Minn., noted that he had been chairman of the committee when Vilsack became secretary in 2009, and that they had lunch every week during the implementation of the 2008 farm bill.

Peterson said Vilsack had "stuck his neck out when nobody else did" with his proposals that the issue of disclosure of genetically modified ingredients in food be handled through a "smart label."

Peterson said that he and Rep. Frank Lucas, R-Okla., who became chairman of the House Agriculture Committee, wondered what Vilsack was talking about when he brought up "smart labels," which became a key element in the law that requires mandatory disclosure of genetically modified ingredients.

Vilsack's portrait is unusual compared to most of his predecessors. He explained that he considered the painting to be a portrait of the Agriculture Department itself, not just a painting of him.

The painting includes several objects, including Vilsack holding a cellphone and with a tablet computer on the desk in front of him, noting his embrace of digital technology. The framed image on the wall, upper left, is a photo of Agriculture Secretary Henry Wallace and Professor George Washington Carver, from the National Archives. Below that is an illustration of President Abraham Lincoln that was given to him by his friend, the late Lennis Moore. The large roll of parchment in front of Lincoln is the Iowa Code from 1927.

Also in the portrait, in his inbox is the graphic from the "Clean, Separate, Cook and Chill" food safety campaign that the Ad Council rolled out in 2010. The leather portfolio folder at his left elbow was given to him by President Barack Obama early in his tenure. In front of Vilsack is a blown glass globe by Josh Simpson, a glass artist who graduated from Hamilton College in 1972, the same year as Vilsack and his wife, Christie. The steel corn grenade is a gift from former NBC News President Michael Gartner, former editor of the Ames Tribune. Pens are gifts from Navy Secretary Ray Mabus, who worked with Vilsack on biofuels, and Olusegun Obasanjo, the former president of Nigeria, when he was governor of Iowa. The small statue of a soldier, behind him at right, was awarded to him by the Iowa National Guard when he was governor of Iowa. It is the highest award given by the National Guard to a civilian. Behind Vilsack at right is the "My Plate" graphic developed during the Obama administration to encourage people to build a healthy diet by eating proper portions of fruit, vegetables, grains, protein and dairy products. The painting even includes a plant-based bottle of Dasani water, representing USDA's Bio-Preferred program. The bottle is resting on a wooden coaster developed by the U.S. Forest Service Forest Products Lab. 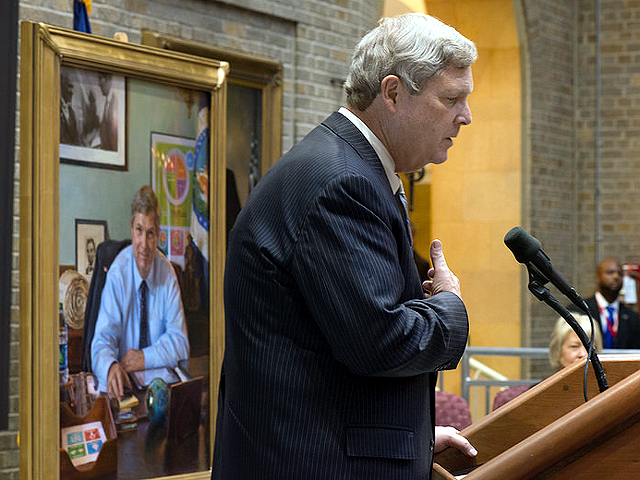