OMAHA (DTN) -- A debate of surrogates for the two major presidential candidates on farm and food policy ended up being far more agreeable than the debates of the two candidates they represented.

Regulatory issues were a top theme at the forum in Washington, D.C., hosted by the Farm Foundation on Wednesday morning that was also webcast by the group. Representatives from the two campaigns also offered some insights on taxes and the next farm bill, which delved into areas such as conservation, the role of nutrition programs and possible "weaning" of farmers off the farm safety net.

Sam Clovis, an Iowan who is co-chair of Republican Donald Trump's national campaign, said agricultural issues need to be looked at as a component of the rest of the economy and political challenges.

Clovis said tax reform is the highest priority of the Trump campaign. He said Trump wants to reduce the corporate tax rate to 15%, ensure 100% expensing on all capital expenses and inputs, and get rid of the estate tax, or "death" tax. Clovis said the estate tax has become a bigger burden on farmers as property values have risen.

"Getting rid of the death tax will allow us to keep our century farms and century families," Clovis said.

Kathleen Merrigan, former deputy secretary of USDA in the first Obama administration, represented Democrat Hillary Clinton. Merrigan said the impact of the estate tax is "blown out of proportion" and is not going to have the impact on "Mom and Dad who want to transfer their farms to the next generation," though she noted there is "deep anxiety about wanting to keep farmland in business."

Merrigan sought to highlight the benefits to the rural economy under Clinton's plan to boost renewable energy production across the country. Merrigan said "rural states can lead the way" on renewable energy such as solar production and wind power. She also said Clinton would push the federal government to keep buying more bio-based products as well.

Clovis made it clear a Trump presidency would address regulatory issues that farm and ranch groups want to see overhauled or ended. He said the administration would create a commission to bring federal agencies together to then eliminate duplication in regulatory missions and force agencies "back inside the bounds of their mission space." Clovis added that the waters of the U.S. rule was a significant concern for producers and the "poster child of government overreach."

On crop insurance, Clovis said the program needs to be looked at because of the changing landscape in commodity prices, but he did not discuss what direction that needs to take.

"We're really looking at a huge transition in crop insurance issues as we go forward, and I think we're really going to have to visit that again in the next farm bill," Clovis said.

Regarding price-support programs for commodities, Clovis added that those need to be reviewed as well.

"We are going to have to start taking a look at weaning ourselves from some of our issues out there," Clovis said. "A lot of markets (are used) to settle some of these factors out here. We don't have very much of that anymore. There's not much in there."

Merrigan addressed water quality as ag groups continue to show angst over the waters of the U.S. rule. She noted that in one of her first legislative jobs, a community in her boss' district had contaminated water that forced people to stop using wells.

"So I saw in my very first job the destruction of a rural community over contaminated water, not because farmers did anything wrong. They were adhering to the label instructions on the chemicals. What I learned from that is farmers want to be land stewards."

The WOTUS rule will reduce what Merrigan called "litigation hell" as she downplayed some of the worries facing landowners now.

"With a rule out there, there is more clarity," Merrigan said. "For the most part, normal farming is exempted, and I think we just need to tamp down the rhetoric here. I think we need to do a better job working with farmers and ranchers on implementation and alleviating the anxiety on a ditch that might be covered by waters of the U.S. In most cases, these are boogeyman worries here."

Regulations, in general, build confidence in industries such as biotechnology and food safety, Merrigan added.

"She understands that there is a reason to help farmers be land stewards and cost-share conservation practices," Merrigan said.

On trade, neither candidate supports the Trans Pacific Partnership even though agriculture as an industry largely backs the trade deal. To improve TPP, Clovis said more transparency in the deal is needed and fairer access is needed for markets. The tariff phase-outs should be much quicker, he added.

"What we are opposed to are countries that have a comparative advantage coming out of the chute," Clovis said.

Merrigan said Clinton doesn't support the details of TPP and any trade agreement must increase jobs and help U.S. security. Both Clovis and Merrigan pointed out the importance of trade to farmers with Merrigan citing that agriculture accounted for $140 billion in exports in 2015. That translates into a significant investment in rural America.

"But what's pretty clear for all of us in agriculture over the course of this year is we haven't made a very convincing case to the American people about the importance of trade to American agriculture," Merrigan said.

The full forum lasted two hours and touched on various issues. The Farm Foundation will post a link to the full audio at http://www.farmfoundation.org/… 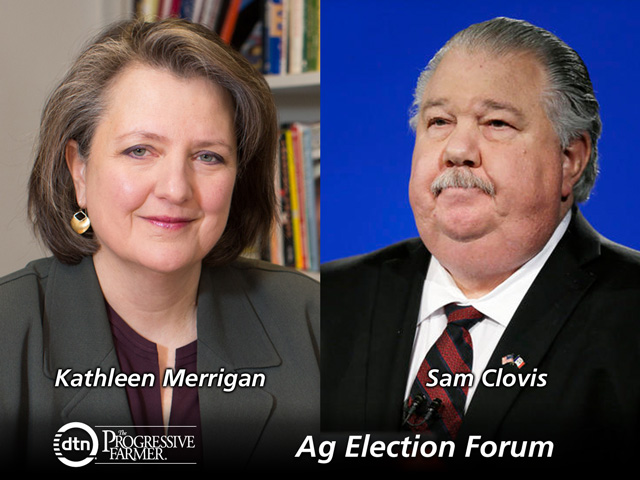