INDIANOLA, Iowa (DTN) -- At some point as you age, you realize you can't do as much as you used to. Dave Lubben, a corn, soybean, cattle producer in Monticello, Iowa, turned 60 and realized, "Physically, I can't do it all." Fortunately, the next generation of his family has the interest and skills to help him keep growing his business as he eventually takes a step back.

Lubben has just started the transition process of bringing his adult children and niece into the operation. "It's going to be a longer process than I originally envisioned. There's a lot for them to learn." The eastern Iowa farmer has adopted some ground rules to help smooth that transition.

1. Work for someone else first. After graduating from college, Lubben's daughter, Lydia, worked for a large regional co-op and her husband, Neal Grant, oversaw a 28-barn hog confinement operation. Lubbens' niece Allison Kelchen was a crop scout for two years. "Working off the farm was key in helping them be more independent and understand how other agricultural operations are run," said Lubben.

2. Develop your strengths. This is where carving a niche in your operation comes into play. Lydia graduated with a degree in animal science. She is now in charge of the 200-head commercial cow herd and the intensive rotational grazing program the Lubbens use. "She pays much closer attention to the health of the calves than I ever could. This past winter, the vet said a couple of the newborn calves wouldn't make it through the winter. But with Lydia's attention and treatment, they all survived," noted Lubben.

Neal, an ag studies graduate, is in charge of the mechanics and crops. Allison, who worked on the farm part-time last year and is now full-time, is still exploring her niche areas.

3. Identify opportunities and think independently. "My philosophy is a little different than most. To me, power is taken. That means, I want them to find things that aren't getting done and do them. Don't wait to be asked first. Come up with ideas and suggestions and we can go from there."

The younger generation also have their own enterprises they are solely responsible for. Lydia and Neal have 20 cows of their own which they bought from a retiring cattle producer. They rent their own pasture and crop ground. Lubben's niece, Allison, is developing some side enterprises such as grass-fed beef and pasture-raised chickens. She's also looking into tree crops.

4. Learn in stages. For the first year, the younger generation concentrated on production only. "I wanted them to get used to the place; figure out what needs to be done on the production end. I figured we can talk about finance and marketing down the road," said Lubben.

"I sent them to a 'financial bootstraps' seminar this winter. And I gave Neal 5,000 bushels of soybeans and 5,000 bu. of new crop corn to sell. And that's been a good learning experience," said Lubben. "Soybeans got to $9.50 and he wanted to sell. After looking at the charts, I said why don't you put an order in for $9.60. Well, the price got to within a penny of $9.60 and then went down. But a few days later it hit $9.61, Neal got his order filled, and the market has been going down since then," Lubben noted.

5. Find mentors. No matter how good your father or father-in-law is at running the farm operation, "you need to surround yourself with the best people you can find," advised Lubben.

6. Discuss short-term and long-term goals. Last fall, the Lubbens had an annual review meeting that included everyone in the operation, including Dave's wife Lisa and their 16-year-old son, Clayton.

"I had a list of questions they all had to answer," Lubben said: What were the lessons learned this year? What are the weak points in our operation? What is your favorite ag web site and favorite ag app? Give me two ideas to cut costs and two ideas to increase revenue. What are your expectations? What educational move do you need to make today to make sure this farm remains sustainable and profitable 10 years from now? Complete this sentence: The best thing about being part of this family is ______.

Two things have surprised Lubben in the process of bringing in the next generation. "The first is how well I get along with my son-in-law. That has been a blessing.

"The second is I thought they would catch on faster and I would be pushed out of the way in a couple years. But they are still figuring things out and I think it will take more like five years before I'm the 'hired man' and they're running the show," said Lubben. "I view my role as the coach. I want them to be smarter than me."

The hardest thing for Lubben was letting his non-family employee of 17 years go. "I lost sleep over that. But he said he was expecting it and I gave him some severance pay and helped him find a new job and we're still good friends," Lubben said.

Respect, humor and the joy of being around each other are also key in bringing the next generation back to the farm. As teenager Clayton explained in his lesson learned in the year, "Don't take your cell phone in to clean the manure spreader." Fortunately, it fell out of his pocket before he got into the spreader. Chuckles spread around the room as the family concluded they needed more family meetings like this than just once a year. Quarterly family meetings are now on the "how to improve" list.

DTN's ongoing Senior Partners series examines the financial, legal and emotional hurdles farmers face as they transition farm ownership from the senior to junior partners. To see more features in this series, go to http://www.dtn.com/… 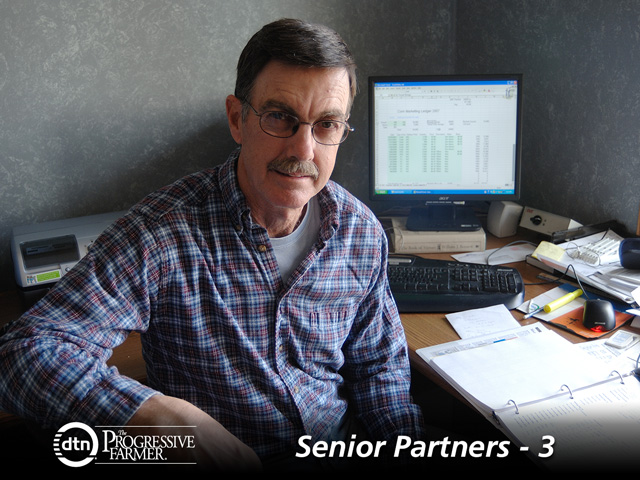