AUSTIN, Texas (DTN) -- Ben Hendrix grew up on an irrigated farm in northeastern Colorado, joining the FFA in high school and partnering on his first farmland purchase with profits from his own sweet corn sideline.

Still, from the time he was in junior high, the would-be farmer knew he wasn't guaranteed a position in the family business. For that, Ben's dad, Jim, would require not just two college degrees but promotions in an off-farm career. When Ben finally applied for a job after earning an MBA and working five years in the financial services industry, his dad's business partners spent two days grilling him in formal job interviews.

"They wanted to know what he brought to the farm that they couldn't hire elsewhere," Jim recalled.

Ben got the position, but it's a formal arrangement, not a gift: The 30-year-old is buying an 11% ownership stake in the operating business with his own funds. He also has a written employment contract outlining bonus criteria and specific goals to accomplish each year. By the end of 2013, Ben needs to be proficient enough to step into his father's role in the event of an emergency or his eventual retirement five to seven years from now.

"Just because you have the lineage to be an heir doesn't give you the right to an executive position in a family business," said Jim, 62, who has always regarded his work as a business that just happens to specialize in agriculture, a philosophy he has passed on to Ben. "You have got to earn the respect of your employees, your landowners and your vendors. That's no different than any other industry."

The Hendrix operation is no ordinary farm, either. Headquartered in Wray, Colo., and nestled along the state line with Nebraska, the family raises alfalfa hay, kidney beans, popcorn and corn on irrigated land they own themselves, as well as manage for individual and institutional investors.

Bush beans require a five-year rotation and specialized planting, harvesting equipment and marketing, so the family also runs joint ventures with neighboring farmers who have land to trade for the Hendrixes' expertise. To minimize hail damage -- the biggest risk for irrigators -- the entire operation of owned, rented and managed farms is spread over four counties in two states and requires more than a day's drive to navigate.

"It really wasn't good enough for our operation for someone to come back straight from college," Jim said. "We work with outside investors. They hold us to a higher standard for accountability and accounting. I want my successor not just to know what I know, but to be a better manager than I was."

So when Ben chose to return to the farm in 2012, his formal ag education was just beginning. His MBA from the University of Iowa grounded him in accounting and best business practices, but he'd never studied agronomy or grain marketing.

"Overhearing marketing and chemical discussions growing up largely went beyond my understanding; my father may as well have been speaking German," said Ben. "Since I've been back, I have a great desire to learn the language. Some of this comes from reading and self-study, but the best way has been through immersion."

Besides the daily counsel of his father, Ben has a team of professional tutors to fill his knowledge gaps. Key among them are grain marketing coaches who spent days white-boarding options and futures strategies and what they offer in protection; an Oklahoma State University Ph.D. agronomist who designed a distance-learning course complete with exams; and a Denver-based executive coach, a former CEO who specialized in turning around troubled small businesses.

"He is expensive, but he's seen all the problems in what can go wrong in small businesses," said Jim. "His job is to teach what you need to do to avoid failures."

Almost all novice farmers apprentice beside their elders for years or even decades as farm ownership transitions to another generation, noted Texas A&M economist Danny Klinefelter, director of The Executive Program for Agricultural Producers (TEPAP), a mid-career management course for business-oriented farmers from across North America, including many second-generation students like Ben. Those home-grown mentorships are a chance to transmit family values, as well as solidify landlord relations and the confidence of lenders.

But Klinefelter has also encouraged TEPAP graduates to network with one another and establish their own peer groups with TEPAP alums outside their home turf. That way they can compare notes and develop informal sounding boards long after they leave class.

"What's different is today's successors require more formal training than their parents' generation," Klinefelter said. "Not only has the scale of farming increased in the last 20 or 30 years, but the magnitude of dollars involved and the potential damage from volatile markets mean there's less margin for error."

Grain marketing has been a special challenge for Ben, especially since prices the last few years did not play by the normal set of rules. "My father decided to throw me into the deep end on this one," he said. For two seasons before he came back to the farm, he rented 62 acres of corn and was solely responsible for any hedging activities and crop insurance. Not wanting to pay for a full-service brokerage account, he opened a futures account with E-Trade. He ended up incurring higher bushel hedging costs compared to his father due to lack of experience, but only started to understand markets once he starting spending his own money.

One setback was the collapse of MF Global, "a good lesson in not leaving too much money in one's trading account," Ben said. In fact, he's still awaiting settlement 18 months after the brokerage firm's bankruptcy.

He also admitted he was too timid in 2011 and 2012, selling once he could assure himself a profit rather than following market signals and positioning himself in case weather markets led to harvest rallies. Jim, on the other hand, wanted to pounce on the rare opportunity of $7.75 corn and sell future crops as far ahead as markets would allow, even though margin accounts required a hefty capital commitment. This year, convinced the five-year bull market for corn is ebbing, they have priced a portion of the 2013 and 2014 crop 12 to 18 months in advance on futures markets, selling the equivalent of about 75% of the current corn crop by mid-June 2013.

It's easy to goof on marketing when prices swing $1 or more during the marketing season, Ben said. "But you know you're fluent when you dream in a foreign language. The other night, I dreamed I was hedging. It's coming to me."

EDITOR'S NOTE: Ben Hendrix won a 2013 DTN scholarship to The Executive Program for Agricultural Producers (TEPAP), a week-long management education course sponsored by Texas A&M. For information on 2014 TEPAP scholarships, go to http://tepap.tamu.edu/… You can hear the Hendrix family share their experience on training a successor at the DTN-The Progressive Farmer Ag Summit Dec. 9-11 in Chicago.

Marcia Zarley Taylor can be reached at marcia.taylor@telventdtn.com 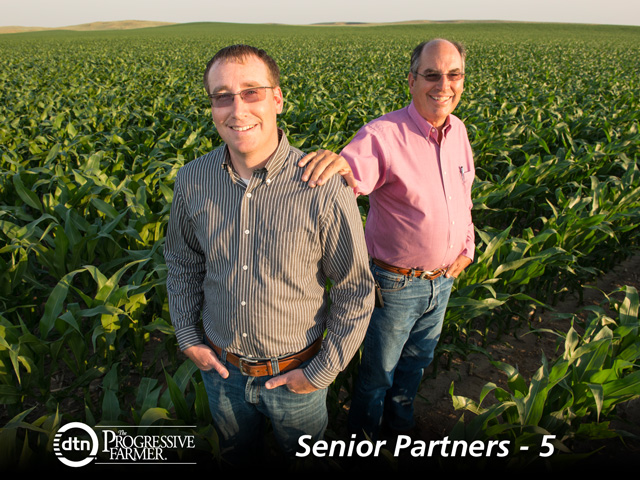