A corn seedling emerges from the soil. The spike, working like radar, examines the environment around it, measuring light and searching for competitors. If it detects another plant, a conversation begins.

Clarence Swanton, professor in the department of plant agriculture at the University of Guelph, Ontario, Canada, calls it "cross talk." If those other plants are corn plants -- and assuming good, agronomic conditions -- the young plant and its neighbors mature normally. But if the seedling detects a weed, that cross talk takes a rapid and potentially ugly turn.

It's a management concept well understood. "If your corn has to fight for sunlight and nutrients with weeds, you're losing yield," said Steven Albracht, of Hart, Texas, one of the nation's top corn growers.

Weeds, emergence, weather conditions, seed population and seed spacing are all elements that affect early corn growth. Each can hurt yield. But weeds do great harm.

Weed control is critical, even in the plant's earliest days. Above-ground weeds affect the corn seed even one day after planting, Swanton said. The emergence of the radicle root, the plant's first root structure, is delayed by the presence of weeds and its length diminished.

"The management of the seedling is critical, as is the timing of weed control," Swanton said. Some level of "(corn) yield loss occurs by the minute," when corn is forced to develop in a weedy environment.

Early weed pressure, untreated or inadequately treated, cuts into yield potential. Researchers know the losses begin slowly but ramp up quickly. Iowa State University research finds as much as a 10% yield loss occurs as early as the V2 corn stage (about 22 days after planting), due to competition from weeds.

Weeds affect the volume and number of the corn plant's crown roots, which replace the seedling's radicle and seminal roots as the primary highway for the uptake of water and nutrients. Swanton finds weeds affect the length, diameter and surface area of the crown roots, harming the corn plant's ability to "withstand resource-dependent competition and future environmental stresses," Swanton wrote. (See "Maize seed and stem roots differ in response to neighboring weeds" at http://bit.ly/…). "A weed can change the growth pattern of corn early on. They are specific changes, and (some) can persist through its entire life cycle," he wrote.

The data suggest, he said, that in the presence of weeds there is an explosive accumulation of hydrogen peroxide in the corn seedling. It's a chemical reaction that damages cell wall structures, suppresses photosynthesis and damages the plant's ability to manage stress.

Among the worst weeds are annual grasses: foxtail, crabgrass and fall panicum. They are nitrogen-eating green machines.

"We find that early in the year, grass weeds take up nitrogen at approximately the same rate as corn," said William Johnson, a Purdue University professor of botany and plant pathology. "That continues until the grass weeds are about 4 inches tall, and then the weeds go into a period where they accumulate nitrogen very rapidly -- more rapidly than corn at that point."

Foot-tall grass can, on a per-acre basis, contain three times as much nitrogen as the corn.

For any herbicide, it was a nightmare environment. The weed and ryegrass infestation hammered yield, driving it down 117 bushels to the acre compared to a plot where a herbicide was applied at both day 36 and day 43. The twice-treated plot produced the equivalent of 164 bushels to the acre. The yield loss on the plot treated with a single post application averaged 17 bushels per day between days 36 and 43.

Iowa State Extension agronomist Bob Hartzler reached this conclusion -- and offers this caution -- from the data he collected from these plots: "Weed management systems that rely on post-emergence control assume that crops can tolerate competition for certain periods of time without suffering yield losses. However, once competition between the crop and weeds begins, the magnitude of yield loss increases rapidly as weed control is delayed."

Beyond weeds, here are several other factors with early effects on the success of a corn crop.

Randy Dowdy expects his entire corn crop will spike when the young seedlings have accumulated between 75 and 110 growing degree units (GDUs). Depending on seed depth and the vigor of the hybrid, he wants to see all the plants spike within 10 GDUs of one another.

Dowdy, who farms outside Valdosta, Georgia, and was the 2014 world corn-yield record holder, finds lost yield accumulates rapidly over just a few hours. "When you see a plant come up 24 hours later than the others," he said, "you now have a weed with 25% less grain on it," Dowdy said.

A DuPont Pioneer paper reviewing current research on emergence, planting conditions, seed populations and spacing, finds that uneven emergence can negatively impact yield by 5% to 9%. (See article "Planting Outcome Effects on Corn Yield" at http://bit.ly/….) Mark Jeschke, agronomy research manager for DuPont Pioneer who contributed to the article, does not dispute the value of even emergence. "But planting in normal conditions and emergence over a two-day period is probably acceptable," Jeschke said. "(Complete) emergence within eight hours probably overstates the effect." He pointed to research findings from a two-year study in Indiana published in 2002. The work found that the timing of emergence in conventionally planted corn accounted for about 4% of the variation in the final yield.

Commercial corn growers should pay particular attention to their planter speed, said Kevin Kalb, who farms near Dubois, Indiana. Kalb can be found consistently on the leadership board of the National Corn Growers Association (NCGA) National Corn Yield Contest. "Anytime you see row units bouncing, you're going to have a difficult time getting an accurate seed placement," he said. "We'll plant at 3 miles per hour to get the uniform seed depth and spacing just right."

Neighboring plants will compensate somewhat for yield lost due to uneven emergence, but not all of it, said Jeff Coulter, an associate professor and Extension specialist for corn-based cropping systems with the University of Minnesota. If a newly emerged plant is one-leaf stage behind the others, a grower can expect -- considering all else is equal -- to lose about 20% of that plant's yield potential, Coulter said. If it is two leaf stages behind, potential yield may be cut in half.

When his typical planting window in March and April remained stubbornly closed due to rain and cold this past spring, David Hula waited -- and waited. He waited until May to plant, a time when he would normally be done with corn.

"We need good emergence, and you get only one chance to do that correctly," Hula said. He expected a good outcome for this year. Hula, of Charles City, Virginia, held the world corn-yield record until Dowdy won in 2014 with of 503.7910 bushels per acre, the first time a U.S. corn yield contest entry topped the 500-bushel mark.

Planting delays had a greater impact in the northern belt, because the growing season is shorter. There, a delay of four weeks saw yields decline by 15%, according to the planting data studied. In the central Corn Belt, losses with a four-week delay amounted to 7% of potential yield. (See entire report "Hybrid Maturity Switches Based on Long-Term Research" at http://bit.ly/….)

It is important to understand the impact on yields from populations planted too high or planted too low. Populations that are too low can limit yield in favorable growing conditions, Jeschke said, whereas planting populations that are too high in poor growing conditions can affect standability and performance. However, he added, "Modern hybrids tend to have a relatively wide margin of error when it comes to ideal population."

Jeschke pointed to one study that examined two hybrid families. Planted at rates that varied by as much as 4,000 plants per acre, over or under the optimum number, the difference in yield was less than 2 bpa.

Spacing is a function of the planter. Optimum spacing accounts for a couple of percentage points of yield. To that end, Albracht emphasized maintenance.

He said planters change over the time they sit in the barn. "Everything gets stiff again, so we tear the planter apart and go all through it. (If) we're planting 40,000 seeds per acre, I want a seed every 5 inches."

A 2002 DuPont Pioneer study looked at the impact of non-ideal planting outcomes on yield. The study was made in three states, with three very different hybrids and with a yield range of 109 to 206 bushels.

The study showed that skips hurt yield the most. Skips mean there are light, water and other resources that go unused, Jeschke said.

"Plants adjacent to a skip only partially compensated for the missing plant," the DuPont Pioneer study concluded.

The effect of doubles on yield was interesting. The DuPont Pioneer study showed that in fields with 10% doubles, yields rose almost 5%. "But I wouldn't go so far as to say doubles are the way to (increase) yield," said Jeschke.

"There is at least enough yield from (an occasional) double to offset the cost of extra seed," the DuPont Pioneer study reported. If an occasional double helps ensure few or no skips, having doubles is a better way to go, the report concluded.

Beyond skips and doubles is the matter of good spacing between single seeds. The DuPont Pioneer study found that a few seeds misplaced by even a half inch has no effect on yield, compared to a planting with perfect spacing. Misplaced spacing by up to three-quarters of an inch caused a yield loss of 0.2%.

"Plant spacing matters up to a point," said Jeschke. But it's easy to overemphasize the notion that corn plants growing in a row should resemble the evenly-spaced pickets of a picket fence, he said.

Editor's note: From its very first day, the corn seedling is under attack by much of the world around it. Weeds are its biggest threat, stealing yield from the moment the corn seed settles into the bottom of the seed trench. In this series, DTN/The Progressive Farmer looks at why weed control and good early season practices are key to producing high-yielding corn crops. This is the first of a six-part series. 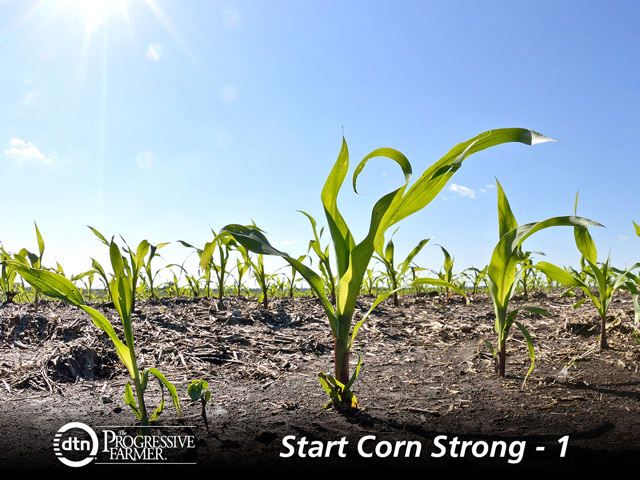