Editor's Note: As soon as a seed is planted, it's a battle for survival against Mother Nature. Little wonder that farmers are constantly embracing new production systems, technologies and tools to improve a crop's resiliency and to mitigate the risks of changing climate.

Those efforts will become even more crucial -- and challenging -- as the world's population reaches more than 9 billion people by 2050. It's one reason why last December the U.S. joined 19 other governments and nearly three dozen organizations and agribusinesses to launch the Global Alliance for Climate-Smart Agriculture. The countries represent millions of farmers, at least one-fourth of the world cereal grain production, and are responsible for producing 16% of the total agricultural greenhouse gas emissions.

The alliance aims to achieve sustainable increases in agriculture productivity and incomes, greater resilience of food systems and a reduction of carbon emissions associated with farming.

Following are examples of farmers who focus on climate-smart practices to manage nutrients, soil and water in response to highly variable weather.

Alan Madison practices what he preaches. As a district conservationist with the Soil Conservation Service, he aggressively promoted soil conservation to farmers. He stressed how safeguarding soil can prevent erosion and nutrient runoff, manage moisture throughout the soil profile and ensure productive cropping systems under changing climatic conditions.

When he left the SCS after 27 years to take up farming full-time in 1997, it was only natural for Madison to implement those same conservation practices he had long endorsed. However, he has taken them to a higher level on the 3,100 acres of corn and soybeans that make up Madison Farms, located in Bureau County, in northern Illinois.

Technology provides the foundation of Madison's cropping system. He has soil maps for every acre and soil tests every three to four years on 2.5-acre grids to determine nutrient needs. He religiously studies data obtained from yield monitors during harvest to write crop-fertility prescriptions. Madison uses a combination of variable-rate fertilizer applications and spoon-fed nitrogen to ensure healthy plant growth and optimum yields.

His nutrient management gets a boost from winter cover crops and no-till or strip tillage. Together, the three systems have increased his corn yields by 25% in the past 18 years with little or no increase in nitrogen use. Equally as significant for Madison is that he's minimizing soil and nutrient loss.

"My objective is to farm every cultivable acre within its tolerable soil-loss capabilities by following best-management practices," he said. "I want to achieve the highest yields possible in a system that is both economical and efficient."

Madison's primary crop rotation is two years of corn followed by one year of soybeans. He also plants some continuous corn on highly productive soils. Generally between 70% and 80% of his acres are planted to corn. He eliminated fall nitrogen fertilization in part to reduce nutrient loss. Instead, he jump-starts corn with a preplant application of phosphorus, zinc, boron and 15% to 20% of the crop's total nitrogen using variable rates wherever practical. The balance of the nitrogen -- 32% solution -- is injected into the soil using variable-rate technology.

"I have found that sidedressing the majority of my nitrogen is the most efficient way to meet crop needs and prevent nitrogen losses before the plant has a chance to utilize it," Madison explained.

"Use of a SPAD [a diagnostic tool that measures the greenness or relative chlorophyll content of plant leaves] or chlorophyll meter at the V10 stage of corn growth lets me evaluate the need for more nitrogen during the growing season," he added. "If needed, we apply 30 to 50 units of nitrogen over the top of the crop with a high-clearance sprayer."

Madison conducts high-rate nitrogen test strips in every corn field. Comparing the test strip yields with the rest of the field helps him determine if he's on target with his standard application rates, or if he can justify a higher rate.

"As a rule of thumb, Midwest crop specialists recommend applying 0.8 to 1 unit of nitrogen for every bushel of corn yield," Madison said. "We strive to achieve 0.8 units of nitrogen. Using that formula, we have increased corn yields from 175 to 180 bushels per acre to 220 bushels. Granted, some of that yield increase may be the result of improved technology in equipment and seeds."

Madison began using winter cover crops three years ago to take up excess nutrients and hold them for the ensuing growing season, and to protect the soil from erosion. He conceded it's still a work in progress. Cereal rye is aerially applied to corn fields during the last week of August or first week of September prior to harvest. He's also trying oats and radishes as cover crops, applying seed into growing soybeans -- generally by the first two weeks in September.

A TOAST TO HEALTHY SOIL

When Jamie Scott touts his favorite cocktail, he's not talking about an exotic drink concocted by a bartender. The Hoosier farmer is referring to a 15-way winter cover crop mix of legumes, grasses and broadleaves he uses in conjunction with no-till in a three-year rotation of corn/soybeans/wheat. The combination creates healthier, more sustainable soils with improved water-holding capacity on his Kosciusko County, Ind., farm.

"We can't control the weather," pointed out Scott, a third-generation grower who farms 2,000 acres with his father, Jim. "We can only control the soil that we walk on every day."

The Scotts' path is built around multiple cover crops. They were first introduced to the farm years ago on a limited basis by Jamie's grandfather. Early in the fall before harvest, they fly on annual ryegrass, sometimes mixed with crimson clover and rapeseed, over corn and soybeans. The cover crop mix is applied to the winter wheat ground after harvest. It consists of cowpeas, sunhemp, Cahaba vetch, two clovers, oats, sorghum-sudangrass, millet, three brassicas -- turnips, radishes and a rape/kale cross -- sunflowers, flax, buckwheat and phacelia.

"When you add in the corn, soybeans and wheat, we get 20 different root systems on every acre over a three-year period," he said. Benefits include breaking up the soil profile to improve water infiltration and better soil health.

No-till was introduced to the operation starting in 1980. The Scotts began incorporating no-till and cover crops across their entire operation about 11 years ago.

Today, the dual system provides important benefits to the soil profile. "We've seen a 1- to 1 1/2-point increase in organic matter," Scott reported. "Organic matter creates a bigger sponge, which takes more water out of the soil in a wet year, while keeping more moisture available in a dry year. That enables crops to make it through stressful periods that we experience with increasing regularity. We've seen a 20-bushel increase in corn yields in dry years."

Cover crops also provide other advantages. The legumes enable Scott to back off nitrogen fertilizer. In side-by-side comparisons between legume cover crops and no cover crops, he's measured a savings of 50 pounds of nitrogen per acre with no yield reduction.

University of Missouri research reinforces the benefits the Scotts observe on their farm from cover crops. Studies show that during wet seasons, cover crops can reduce sediment and nitrate transport to downstream water bodies by up to 60%, depending on soil type, amount of biomass produced by the cover crop and how and when the cover crop is terminated. Conversely, increasing soil organic matter makes crops less susceptible to drought. A 1% increase in soil organic matter translates into additional water-holding capacity of 25,000 gallons per acre.

Just as important for the Scotts, cover crops and no-till bring peace of mind. "We sleep a lot better when we hear it raining at night, and we don't have to worry about our farm washing away," Scott said.

Optimizing water use is a top priority for Ron and Ray Makovicka. They farm in Nebraska, where three out of every eight cropland acres are irrigated. Even though the state is over the vast Ogallala Aquifer, scientists warn it's being depleted at an alarming rate. The underground water supply can't recharge because of rising demand and variable precipitation patterns.

The Makovickas farm 1,250 acres of cash corn, seed corn and soybeans near York, Neb. Faced with a declining water table and higher pumping costs, they decided to participate in the Nebraska Ag Water Management Network (NAWMN) project. It encourages the adoption of newer technologies to increase water and energy efficiency in irrigated crop production (water.unl.edu/cropswater/nawmn).

"A number of helpful new technologies have come on the market in the last five years, including sensors, computer models and computer apps, that provide information to help farmers decide when and how much to water," said Bill Kranz, University of Nebraska Extension irrigation specialist. Information on new technologies is delivered to 1,229-plus irrigators and ag professionals who are part of NAWMN.

One technology the Makovickas rely on is moisture sensors. "Farming with limited water supplies, our challenge had always been [scheduling irrigation], when to begin watering and when to stop," Ron Makovicka explained. "Sensors tell us how much moisture we have in the soil and the rate at which the crop is using it. That gives us the confidence to wait a little longer when, otherwise, we might be quicker to hit the trigger."

The brothers have 22 Watermark stations for their 10 center pivots. They have demonstrated soil-monitoring equipment from John Deere Water and Servi-Tech's TheProfiler System, using Watermark sensors. The Upper Big Blue Natural Resources District provides 50% cost-sharing for the sensors and related equipment.

The Watermark consists of a pair of resistant electrodes embedded within a granular matrix. A current is applied to obtain a resistance value. Resistance between the electrodes decreases with increasing soil water. The sensor reads moisture from 0 (saturated) to 200 (dry) centibars.

The Makovickas said the sensors have helped them reduce water usage by 2 inches per year, a cost savings of at least $1,000 per inch for each center pivot (132 acres). Yields have remained excellent.

In Wayland, Mich., Nick Suwyn grows corn and wheat for grain, silage and soybeans. Like the Makovickas, he looks for ways to optimize irrigation efficiency. Three years ago, he heard about the Water+ Intelligent Irrigation Platform. Suwyn didn't hesitate to sign on.

The subscription-based platform is a collaborative effort between Syngenta and Lindsay Corp., a major provider of irrigation systems. The program combines an agronomic system with irrigation technologies and services. A local service team advises growers on hybrid selection, crop-protection regimens and irrigation management and scheduling. Participating growers also have access to Lindsay's FieldNET wireless irrigation system to remotely monitor and control their center pivots.

"The Water+ Intelligent Irrigation Platform has enabled me to cut back some on water usage plus or minus 10%," Suwyn said. "More importantly, it's enabling me to be more timely with irrigation, applying water precisely when the crop needs it. I no longer wait until the soil is dry to begin irrigation and then have to play catch-up." 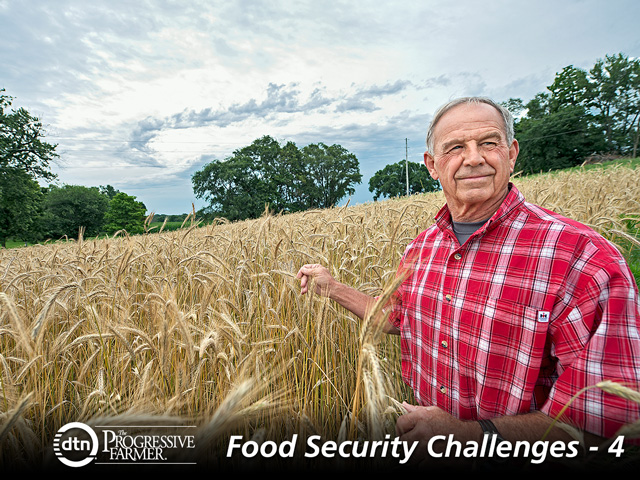