DECATUR, Ill. (DTN) -- Crops and livestock aren't the only thing growing like weeds around Luke Garrabrant's farm. At the tender age of 2, his daughter, Gracen, already makes her desire to tag along to chores abundantly clear.

Producing crops may be the focus of Marc Arnusch's Colorado farm, but he's also raised a son on the farm -- one who made the deliberate decision to return and make farming a career. Over the years, the Arnusch family has enthusiastically offered their farm and home to other youngsters yearning to get closer to the land and learn about agriculture.

When asked, both farmers will tell you there's no better place on earth to raise children than a farm. The why of that belief, though, typically results in a thoughtful pause. Farming is what they know and sharing it just seems natural. Kids crave fresh air, getting dirty and doing.

This week the farmers talk about raising kids and crops from their respective farms as part of DTN's View From the Cab series. The diary-like feature has been tracking the two farmers since May 2022. The weekly installments discuss agronomic challenges and many of the rural life questions that crop up on farms.

Last week these farmers tackled the tough topic of deciding how green energy projects fit or don't fit onto the landscape. You can read it here: https://www.dtnpf.com/….

Much of the discussion about the future of their respective farms lies with the legacy of the land and what it represents. This week they also talk about wicked weeds, the short supply of wheat seed and how corn, milo and soybean crops are faring as harvest approaches.

Want to talk longevity and survival? Arnusch needs only to look at the kochia plant. "I've tilled more ground this year than I want to admit to, trying to get ahead of kochia," he said.

Most chemistries aren't touching 2-inch tall kochia anymore, he said. Keeping it under control in summer fallow wheat acres has been a real struggle, he said. "I think it's a call to action to the industry that we need some new weed control alternatives," he said.

The area remains in drought, despite some unexpected rainfall in August. "We are about 95% through corn pollination. Dry conditions caused some emergence issues, which are showing up in the field as the crop pollinates, Arnusch said. While all the corn on the farm will be harvested as silage, it is still running far behind schedule.

"Drought and heat often get put into this junk drawer term we call stress. It seems to me that we are seeing that they are different. Even irrigated acres where we have ample water supplies, we are seeing a number of scorched leaves, short plants, nodes stacked close together and some pollination issues," he said.

Milo is showing its ability to withstand tough conditions though. "We have places where you can't the difference between our irrigated and dryland milo crop," he said. "Although we've had a few spotty rainfall events, it has seemed to endure the heat stress of July and August much better.

The chances of those dry conditions changing soon aren't great, said DTN Ag Meteorologist John Baranick. "A cold front will be moving through Keenesburg on Sunday and that will be followed by seasonal temperatures again with highs in the mid-80s and lows dropping into the 50s. The chance for rain is pretty low with the front on Sunday and that's followed by dryness likely for the rest of the week. I suppose it's possible they get lucky with a random pop-up shower midweek, but that's a long shot," Baranick noted.

Restorative rains are sorely needed though, especially since fall wheat seeding is around the corner. But Arnusch said wheat farmers may find small supplies of certified seed wheat are also a problem. Drought caused most of the wheat seed acres on his farm to be destroyed this spring and the farm is exiting the seed wheat business after this season. However, they have been able to supply some carried-over inventories of certified wheat seed for planting this fall.

"It's not just a problem here in eastern Colorado. We've had calls from as far away as Washington State looking for certain genetics. We are sold out, but we've been trying to help others find supplies without much luck," Arnusch said.

Since farming a business full of such uncertainties, Arnusch wasn't at all sure his son, Brett, would want to carry on the tradition. "Frankly, when he graduated from high school, I would have bet the farm he would not come back," Arnusch said.

"He found his passion for farming in college. Out in the world and in the classroom, I think his eyes were opened to the possibilities. Never once did we tell him he had to come back. He chose it and I'm glad that he did," Arnusch said.

As for himself, Arnusch said he can't remember a time in his life that he didn't want to farm. "In fact, my mom has often said that I wanted to farm more than my dad ever did. That caused more than a few disagreements between us," he admitted.

His father endured the lean times of the 1980s farm crisis by working harder. "When I came back to the farm after college, I knew there had to be another approach. It wasn't that Dad did anything wrong, but the world was changing to more of a business model," he recalled. "Dad and I found success in different ways.

"That's why it makes me smile thinking about Brett and how he's changing the farm again as we look to more value-added specialty crops and use of information technology," he said. Brett also has his own hay-making venture to test theories and practices.

Still, Arunsch believes there's something to the early rearing of kids on the farm that endears them to it. "Brett was with me a lot growing up. He fell asleep in his car seat on the floorboard of the combine. We spent late nights out just staring at the stars.

"Most farm kids develop a relationship with the land and their environment. There's often a stronger family dynamic because you spend so much time together," he said. Growing up less than an hour away from Denver meant city life was not foreign to Brett. But Arnusch said 4-H, FFA, sports and school activities exposed his son to a wide range of experiences beyond the farm gate. So did some of the agriculture boards Arnusch served on as they met and interacted with farmers from all over the country.

Since Brett is an only child, bringing a foreign exchange student into their family circle was a way to interject the sense of a sibling and provide another touchpoint to cultures beyond the farm, he added. Seeing the farm through another's eyes also helps reinforce the special aspects of rural living to those who might be around it so much that is can be taken for granted, Arnusch said.

"We know not everyone can live on a farm, nor would they want to," he said. "Maybe it is one of those things where we need to remember how special it is that we have that opportunity?"

Garrabrant still laughs when he recalls his daughter Gracen's reaction of "that's huge!" when he held up a nice ear of corn for her to view this week.

There's nothing quite like having a child remind you that small things are big. Now that Gracen is more mobile, he's aware that taking her along comes with safety considerations and precautions.

"But sometimes she's also a reminder that I need to slow down and take time to appreciate things around me too," he said. "I love teaching her about the farm and seeing her interest." This summer he and wife, Paige, introduced Gracen to watering the flower garden. There have been trips to wiggle toes in the nearby creek and, of course, crop scouting.

Proximity to family ranks high on his reasoning of why he likes raising children in his current environment. Seeing his own father develop a relationship with his daughter has been heart-warming, he said.

"Call me old-fashioned, but I also love farm life because it encourages you to be outside. I can't stand being indoors. It just doesn't seem natural to be cooped up inside all day and that seems especially true for children," he said.

Garrabrant said he loved farm life so much that he sometimes wonders if he skipped other activities because he preferred to be on the farm. "Dad coached some of my baseball teams. We took family vacations. It wasn't like I didn't have chances to do other things or was restricted, I just liked the farm better," he said. Showing cattle widened his horizons, as did college. But the pull of the farm has never let go of him. It's just where he feels comfortable, he said.

These days children have so many activities that he wonders what the path ahead looks like for his daughter. "Right now, she's loving everything we expose her to and that's a ton of fun for her and us," he said.

If weather patterns hold, Gracen may get the chance to offer a few more exclamations about the Ohio crop. Garrabrant had a rough planting season, but he's been in a sweet spot for weather since mid-to-late June.

The late planting will likely set back harvest for a week or so. Best guess is combines will start to roll for real around Oct. 1, he said. There was some early planted corn that may go before then. Some corn is starting to dent. A few fields are starting to show a few leaves turning. Leaf disease has been very light and a non-issue so far, he said.

"Because of the lateness of the crop, I'd say we'll have an average year. Last year we had record crops on most of our fields -- even our toughest fields that can be swampy," he said.

Scattered showers and reasonable temperatures remain in the forecast for the area, said DTN's Baranick. He expected the front that blows through Arnusch Farms in Colorado to reach Johnstown by Aug. 30.

"As of Friday, August 26, any storms that come through are not expected to be severe," Baranick said. "Temperatures will get into the mid-to-upper 80s ahead of that front but drop down into the upper 70s and lower 80s behind it for the rest of the week."

That should give Garrabrant enough time to finish the final hay baling of the season. He's giving up that forage crop after this cutting. He won't have wheat acres either, but cover crops are still in the game plan.

Since his drill has been sold, he's considering alternative ways to cover up with the mixture of cereal rye, radish and clover. He's been wanting to purchase a vertical tillage tool and has his eye on one that has a cover crop seeder attachment. He's also considering putting cover crop seed in with a potash application.

"I've got one field that needs a waterway constructed and seeded. I'd like to do that before I seed cover crops," he said. Another farm needs some tiling work.

Baranick said the forecast is for above-normal temperatures and below-normal precipitation in Johnstown for October. "Unless something unforeseen happens like a hurricane coming up from the Gulf of Mexico and soaking Ohio, harvest should go off without a hitch," Baranick said.

"But with weather, just about anything can happen any day," he added.

Hey ... the same can be said for raising children, no matter where they live! 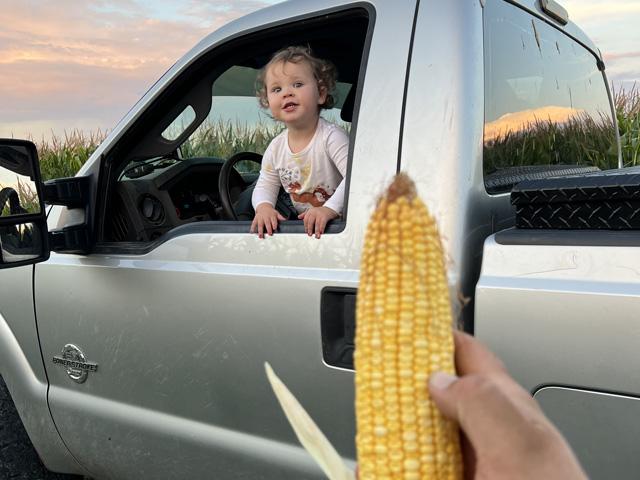