DECATUR, Ill. (DTN) -- Marc Arnusch is a hands-on kind of guy when it comes to tending crops. On the other hand, the Keenesburg, Colorado, farmer believes strongly in keeping the farm virtually visible to customers and the public through a variety of social media tools.

Luke Garrabrant has grown up in the electronic age, so developing a farm website seemed a logical way to try to broaden his farming reach. Still, the Johnstown, Ohio, farmer has also taken his communication efforts old-school by printing and mailing a newsletter. He's been wowed by the landlord response to the two pages of pictures and text that outline seasonal happenings around the farm.

The reasons and methods may vary behind these efforts, but both farmers have come to appreciate the importance of telling the story of their farms and family. Participating in DTN's View From the Cab series is an extension of that communication effort. Each week they volunteer their time to provide crop progress reports and thoughts on a variety of rural topics and issues.

This week the farmers talk about how they are working to develop a social media presence and why. In the field, there is hay to bale and barley harvest to finish. As the dog days of August approach, they continue to watch the skies for rainfall to help fill the crop.

Luke Garrabrant wasn't sure he'd ever say the words perfect and weather together in a sentence again after the spring planting season. But the last few weeks have reduced some of his row crop angst –- at least for now.

"We've had near perfect weather for pollination. I don't know that it is widespread, necessarily, but we seem to be in a bit of a honey hole regarding rainfall and temperature. If it continues, we could have some good corn yields come fall, despite the late planting date for a lot of our crops," Garrabrant said.

He's not quite as confident about soybeans. "There's going to be some good beans if they were planted early. But I'm thinking whole farm averages could be off a little," he said.

While he's watching for corn and soybean diseases, they are not traditionally a huge problem. He's never experienced enough disease pressure to justify fungicide application.

DTN ag meteorologist John Baranick confirmed that crops in the Johnstown area have been getting plenty of mid-season drinks. Heavy rains have been well to the south of the region.

"The heat will be building in the Plains and western Midwest this coming week but will not extend to this part of Ohio. Temperatures are forecast to be a little more reasonable in the 80s all week long, but a day or two in the 90s will be possible. A couple of fronts and disturbances will move along the outer edge of the heat dome, which will bring a chance for a bit of rainfall to Ohio. Chances are not great, but they're better than farther west," said Baranick.

Those rain showers that pop up every three days may be great for growing corn, but it makes it tough to bale hay. Garrabrant has managed only one cutting so far this year. He has made the difficult decision to exit the hay business after this season is over.

"I think it is the best decision for our operation. I'm not going to say we'll be out of it forever, but it's just not working right now," he said. "It requires too much labor at a time when we need available labor for other operations."

Planning for next year also involves keeping track of what hybrids and varieties are performing or not performing well in the field. Last year when his valued seedsman changed companies Garrabrant chose to stick with the salesman, rather than the brand.

"I was familiar with the (new) brand and knew it to be a good company. I also liked that I now have access to several different trait platforms in soybeans because of the change," he said.

Variability is the name of the game in this central region of Ohio and that translates to a need to work closely with his seedsman, he noted. "I know what each environment each farm is – the level of drainage, the organic matter, etc. We take time to sit down and put our heads together to discuss what numbers to place on each farm. We have some tough ground, and we have some ground we can really push the envelope on," he said.

Still, he doesn't like to over-complicate the process. "I try to match the offensive and defensive packages to each farm. At the same time, I try to keep a limit on the number of varieties and hybrids," he said.

"You can go into spring with the best plans and get hit with a year like this one and suddenly you are just trying to get the seed in the ground," he added.

Those types of decisions are an example of what they discuss in the quarterly newsletter that Garrabrant and his wife, Paige, started this year.

"We think it is important to keep everyone (landlords, bankers, input suppliers) in the loop, but not all have email. The newsletter is also a tool to keep everyone involved and informed without constantly picking up the phone for individual calls," he said. "And it is a way for me, as a younger farmer trying to become established, to get my name in front of people and let them know what I'm trying to do."

The newsletter is also available digitally on the farm website: https://www.g-farms.com/…. Paige designed the website and keeps it updated. "That woman can do anything she puts her mind to," Luke bragged. "I had a vision for our website and she made it a reality."

The farm website outlines things like the farm mission statement, vision statement and core values. Establishing these tenets has helped to give the couple focus as they work to build the business.

"I follow a lot of other farms through their social media channels. I'm watching closely what they do and how they do it. If I see something I like, I write it down and save it to contemplate on a rainy day," he said.

He particularly likes the idea of landowner appreciation dinners. "As farmland changes hands and investors and out-of-state heirs become more common, I'm just trying to find ways to be more present and accessible and show professionalism," he said.

"Maybe that's not how all people find tenants, but it is surely better than doing nothing and just waiting for opportunity to come to you," he added.

Keeping a website populated or writing a newsletter filled with engaging content may sound easy, but there is a time requirement. "Taking a picture and throwing up something silly isn't really what we're about. It takes time to develop things that are thoughtful and meaningful and then, someone must take the time to post it too," he said.

Rainfall isn't common in the eastern part of Colorado this time of year, but Marc Arnusch wasn't going to complain when a rain shower shut down barley harvest this past week. "We had about six hours of harvest left, and we got just enough to knock us out of the field," said Arnusch.

He was also experiencing some weather whiplash as 100 degrees temperatures plummeted into the upper 70's nearly overnight. The recent overcast, cloudy and humid conditions are not common for the area this time of year, Arnusch noted.

DTN ag meteorologist John Baranick said the thermostat will likely ratchet back up for the region next week. "It will be tempered a bit by some clouds from the monsoon showers developing in the central Rockies for several of the days. Areas off to their east will be dealing with more of the middle to upper 90s while Keenesburg could be more in the upper 80s to lower 90s. Some of those showers in the Rockies could leak eastward into the Plains but getting them into the Keenesburg area will be difficult to do," Baranick said.

That may spare the farm team long enough to take care of the haylage harvesting and hay baling on the work schedule. "We're on our second cutting of both haylage and small square bale hay," Arnusch said. "And we're likely going to get a third (cutting) on all acres and possibly a fourth on some."

Not as weather dependent is the current chore of upgrading the farm's existing website: https://www.arnuschfarms.com/…. A web designer is currently reconstructing the site and working with the farm on keywords and phrasing to make sure it rises to the top in searches and stays in front of target audiences.

"The site is important because we are seed growers and sometimes seed advisers. We're also interacting with the craft beer and spirits industry through it," Arnusch said.

"But I also think it is important to have an awareness out there about agriculture and to try to move the needle of public opinion about agriculture, particularly in this state. The website helps with that," he observed. Taylorann Cantwell, the farm's office manager, keeps the site tended, but Arnusch also contributes by taking pictures and posting to Twitter and Facebook.

"It does take time, but it is fun to talk about all the things we grow, and we focus a bit on what's important to us. We are super proud to be farming in eastern Colorado and it is a way to tell our story," he said.

The time commitment to keeping the site evergreen is something the farm is evaluating as they take on this redesign. Seed variety selections and recommendations as to placement of those varieties is one concentration. "It's a good way to communicate what genetics go on what acre and I think it can be used as a tool to attract new seed customers more than we have in the past," Arnusch noted.

The farm only has one landlord, who has been part of their operation for two decades. Actively trying to drive interest in the farming operation to acquire land hasn't been a focus. However, the need to communicate with brewers or distillers is a different story.

"They often like to have a farm with a story and they will sometimes add a link in their tasting room to our farm. It's a way to get some traction and interaction with the broader public. When a consumer can come in and scan a code at their table that takes them virtually to our farm to learn more about our processes -- yeah, that's cool," he said.

Customer appreciation and field days are another way Arnusch Farms reaches out to the public. "We're learning that our customers want to communicate in many ways. There's not a one-size-fits-all approach," he said.

Building a culture between the end user and farmer always seems to go a little better with food and beverage, he added. "In the past, we've had 65 or more growers come to the farm to learn about seed placement and then wrap it up with teaching why certain wheats and barleys create different aromas and taste in spirits," he said. 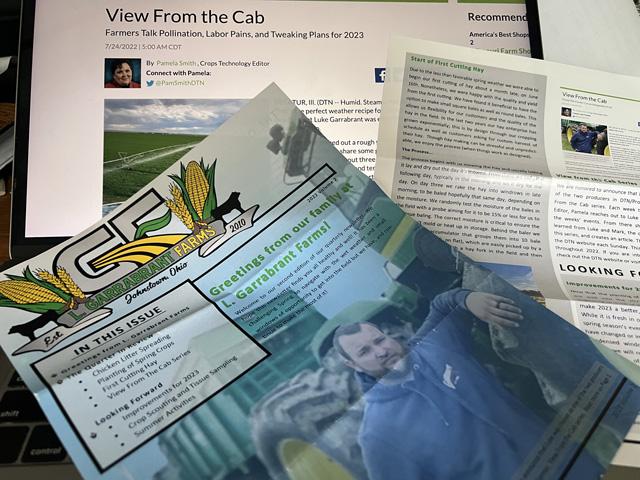