"It's a little early for us to tell, but I would suspect we're probably sitting on about 80% or 90% of a normal-type crop," he said.

In central Ohio, Luke Garrabrant is raking and baling the last of the wheat straw and tackling giant ragweed and waterhemp in one of his custom application client's non-GMO soybean fields.

"We're not sure if we're going to be able to get them or not, but we're really giving it our best effort," he said.

Garrabrant and Arnusch are participating in DTN's View From the Cab series. Their weekly reports throughout the growing season detail the condition of the crop and various other aspects of farming life.

This week they discuss the challenges of grain marketing, crop insurance and running a business.

In a typical year, Arnusch targets a 140 bushel-per-acre yield on his irrigated barley acres. "I'm not sure we're going to see any of that this year, but I would say we're going to still be in the same zip code."

Each year, Arnusch ships certified barley seed to 20 different states. Often, that's semi loads up to Wyoming or Montana. But sometimes, he'll ship 2,000-pound tote bags to California via FedEx. It just depends on how much the customer needs and when.

Some of his barley will go to breweries and distilleries. Some are national, like New Belgium and Oskar Blues. Others are small and local, like Horse & Dragon Brewing Company in Fort Collins, Colorado. But as Arnusch tells it, it all started by accident.

"We had a malt house contact us because they really liked a specific grain that we were growing, and as it turned out, we were the only grower of that grain left," he said. As the farm pivoted into the value-added sector, it changed how he thought about his crops. It was no longer just yield, moisture content and test weight.

"We needed to know what its gluten strand strengths were, and how much starch it should have. How quickly does it germinate and how much energy does it take to germinate? We've changed our vernacular with the brewers so we can show them our value proposition."

It's worked the other way, too. When brewers tell Arnusch they're looking for specific characteristics, he can change agronomic practices to get as good of a match as Mother Nature will allow.

Arnusch can harvest his entire barley crop in a week to 10 days, but it will take longer than that this year. Some fields are still immature due to tough growing conditions this spring. He thinks they'll wrap up harvest in early August.

Colorado is a corn-deficit state, and that's reflected in his new-crop basis. Local buyers are bidding 55 cents above the December futures contract. For July, they're willing to pay $2 more than futures to feed all of the cattle and chickens in his region.

Arnusch hedges a significant amount of his grain on the board and uses a variety of put and call strategies to manage risk. Even though he studied agriculture economics in college, he uses a market advisor to "keep me diligent and make sure that I'm taking risks off the table. It's something that we feel confident in and we have some control in. Whereas a lot of times in the field, the adjustments you can make can really be knocked out if Mother Nature doesn't treat you right."

Another lynchpin in his risk management strategy is his Whole-Farm Revenue Protection policy. Rather than insuring by crop, the policy insures the farm's entire revenue based on the seven-year rolling history reported on his Schedule F tax form.

"That policy has been key for us to continue to remove risk, because not only does it insure me for risk in the field, risk in the marketplace, but sometimes it even insures me against me if I've made bad decisions or maybe I did something within the crop that didn't reward me, or I sold it incorrectly."

Arnusch said because it insures revenue, it also simplifies the claims process. Rather than haggling with an adjuster over whether a damaged field will yield 8 bpa or 10, claims are based on his revenue as reported to the IRS. "It's very systemic and I think very complete. And we're still in business in large part because of it."

He's carried the policy since participating in the pilot program a decade or so ago and said it's "easily taken more risk off the table than it's ever put on."

There is a three-crop minimum to qualify for a Whole Farm Revenue Policy, which excludes most typical Midwest corn and soybean growers. But Arnusch said he thinks it could be a good choice for southern cotton and peanut growers as well as farmers in the Dakotas and Minnesota, where they grow sugarbeets and other value-added crops.

One of the only downsides to the policy would be in a year of rapid expansion (30-40% in a year), because a rolling average revenue wouldn't fully reflect the risk.

With his son, niece and nephew working in the operation, growth is on Arnusch's mind, and 2022 has been the driest since they joined the business.

"It's been a challenging year. It's been a tough year. It's been a great year to teach," he said. One of the biggest lessons is staying patient, keeping a close eye on the weather and making sure they're prepared for the tasks ahead when the short windows of opportunity open.

"It's hard to manage around dry. I think for us here in Colorado, it's much easier to manage around wet. In hindsight, nothing really sticks out to me as something that I would have wanted to change, and that tells me that we've been able to teach an approach, teach some of the reasons why. It's one thing to ask your staff or the people that work with you on your farm to go and do something, and it's a completely different conversation to tell them why."

Between tackling difficult weeds, baling the last of the wheat straw and visiting the FSA office, Garrabrant had his hands full on Thursday.

"Trying to coordinate to make everything happen can be tricky at times," especially with his full-time staff member out on vacation.

He'll be moving on to his second cutting of alfalfa in the next week or so. Garrabrant farms just outside of New Albany, Ohio, an affluent suburb of Columbus with plenty of land for horses. The equestrian interest makes for a strong market for square bales.

"My dad's made hay since he started farming, and quite honestly, it's how he got on his feet," Garrabrant said. "Now I've kind of picked up on it. I started making hay last year on my own."

Since there's no futures market to help establish the price of hay, it's largely based on what the buyer is willing to pay. He's finding he can charge a little more for quality alfalfa because of all the demand in his area. Garrabrant's dad sold his hay through advertisements and offering farm visits and samples.

"It's worked well for him, but because I am involved in so many different enterprises within the business, I'm wanting to go more for the wholesale-type route, and kind of skip the five- to 100-bale customers." He'd rather find a retailer to partner with, similar to how he sells his wheat straw.

"I don't have the resources or manpower to make the small deliveries or be there for someone to pick up five bales. With a labor pool that's small to begin with and me being young and my business growing, the budget is not there for the labor."

Garrabrant is the first to admit that he still has a lot to learn in the grain marketing and crop insurance arenas. He's fortunate to farm in an area with a lot of corn end users. There's a large egg farm less than 10 minutes from his home, and a hog farm two minutes down the road. There are a few ethanol plants nearby, but the price has to be right to justify the cost of hauling grain.

He sells most of his soybeans to ADM or DeLong in Columbus, where they're put into containers for exporting. There are a few crushers further north, but he rarely sells to them because he doesn't have on-farm storage.

"Even though sometimes it pencils out to be more profitable to go further away, you kind of lose that benefit when the combine is sitting in the fields because you're waiting on a truck," he said. Garrabrant hopes to add storage to his operation in the future.

In the meantime, he mostly uses hedge-to-arrive contracts for any grain he sells before harvest. He uses historical yields and crop insurance guarantees to figure out how many bushels he's comfortable selling ahead of time. He'll then try to divide up the sales over three or four time periods.

"It's not the most detailed marketing plan. It's probably not the best marketing plan, but it's something I'd like to develop over the next couple of years and take to the next level," he said.

For crop insurance, Garrabrant buys a revenue protection policy, usually with 80% coverage. In 2018, RMA started allowing farmers to combine all of their acreage of an insured crop in contiguous counties into one enterprise unit.

"That was huge benefit to me," he said. His operation spans in three counties, but because he's just starting his farming career, he doesn't necessarily have multiple farms in each county. If he does, they may not be planted to the same crop.

Like his marketing plans, Garrabrant said crop insurance is one part of the business where he'd like to grow his knowledge. In the meantime, he has a good crop insurance agent that he trusts to help him make good choices.

As a farmer, "I feel like we have to be well-versed enough to know what's going on to make sure we're not getting taken advantage of, but yet, we can't be an expert in all of those things, or even half of those things. We just have to make sure that the people we rely on for those things are having our best interests in mind and doing what we need them to do." 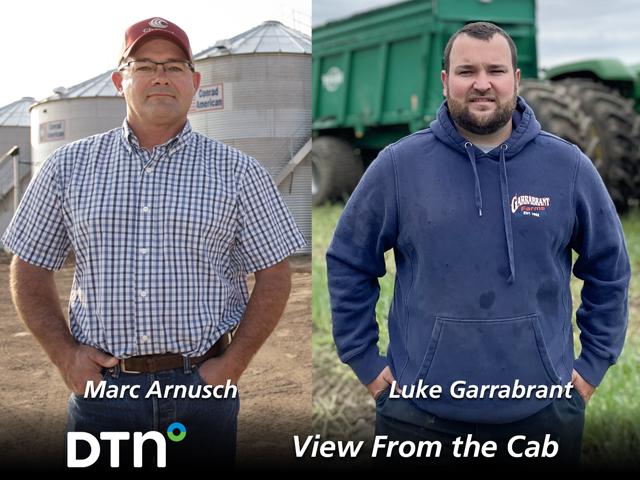