DECATUR, Ill. (DTN) -- Raindrops were falling on Marc Arnusch's head this week and the eastern Colorado farmer could hardly believe his luck. The area has been stuck in a prolonged drought and the drips might as well have been diamonds -- they seem that precious this year.

Central Ohio farmer Luke Garrabrant also received much-needed rain on July 7 -- which seems ironic since he fought persistent wet conditions through most of May and June. "I didn't even mind that we still had some straw to bale. We were starting to see corn plants turn into looking like pineapples," he said.

Garrabrant and Arnusch are participating in DTN's View From the Cab series. Their weekly reports throughout the growing season detail the condition of the crop and various other aspects of farming life.

This week they report in on what they are seeing in the field and take on the sometimes-contentious topic of whether farmers take enough time off and how to strike a balance between work and family commitments.

The rain that fell on Luke Garrabrant's fields came as welcome relief, but he was also giving thanks that he didn't get the gullywasher that swept across parts of his region.

"I did some driving and an hour to the east of us, I saw quite a few fields ponded. South and west of where I farm, fields experienced wind and I saw quite a bit of corn blown over, but it didn't appear snapped. A few trees were down," he said.

Prior to the rainfall this week, Garrabrant said some corn plants had rolled up tight and started to take on a dull color. The USDA-NASS Crop progress report on July 3 pegged Ohio corn at 49% good to excellent and 35% fair. Soybeans were in similar ranges at 48% good to excellent and 36% fair condition. Both crops tallied a 16% very poor to poor rating across the state.

This past week Garrabrant was focused on the winter wheat crop, which has been a bright spot in his operation this season. Final yields came in a smidgen over 80 bushels per acre on average. "I had one farm that had a weed control issue that hurt averages a bit, but overall, the crop was above average for our area," he said.

He concentrated added crop inputs on a lower productivity farm and was able to raise yields to match those from his higher productivity fields that did not have fungicides and additional fertility applied. "That lower productivity field is laid out in finger-like projections with ravines at the bottom. It is simply a tough field to farm compared to the flat and fertile fields. I was happy to see that we could bring those yields up," he said.

Wheat fields will now be allowed to lay fallow for a few weeks before being seeded to hay production. Some of those acres will be dedicated to straight orchardgrass and others to an alfalfa/grass mix.

Last year Garrabrant began a small hay business – mostly merchandising through a farm website. He has a relationship with one landlord where he does the seeding, tending and hay baling for a share of the cuttings, which he then sells.

It's a part of his farm business that he's interested in expanding. "I'm still figuring out where I want to go with it. I'm not real interested in having a retail outlet where I sell 10 bales from the farm. I'd rather sell to one or two specific customers, but I'm new to this business and still working it out," Garrabrant said.

There's still a bit of straw to bale and second cutting hay will be just around the corner. This week he'll also turn his efforts back to post-emergence soybean weed control. Weed control issues have been minimal this year thanks to early-season residuals that have held most grasses and broadleaves in check, he said.

Weather delays and supply constraints have required some nimble thinking to switch herbicide programs up this year. "I think it's been good training. We can't just assume one program is going to work, we have to be able to shift along the way," Garrabrant said.

What he's hoping is that every little thing just calms down a bit. "The weakest area in everything I do is finding a good work/life balance," Garrabrant admitted. "It is by far the hardest thing I deal with."

"But by golly, Ned, was I wrong. I work harder now than I ever did. There is always something to be done," he said. At 26, Garrabrant knows his generation is known for wanting free time.

"I'm not afraid to work, but a spring like this one does make me question whether I'm trying to do too many things in the same timeframe," he admitted.

Beyond the farming, cows and custom manure, haying and spraying businesses, Garrabrant and his wife, Paige, have been renovating a farmhouse. Paige also works off the farm at The Ohio State University. And, they have a toddler and, three dogs.

He said what they are beginning to realize is that sometimes the balance can be a simple break. Last week, they took a moment to wade and splash through a nearby creek.

"What I occasionally need is the chance to catch my breath. I don't want to get so work-focused that I also miss important family things," he added.

Say downtime to Marc Arnusch during the growing season and he's likely to think you're talking about an equipment breakdown. For him, the summer growing season is for that--spending time tending the crop and the profit centers of the farm business.

He allows that his wife, Jill, might have a slightly different answer when it comes to work/life balance. Then, she works in the farm business too.

"We've just never been a family to take much time off during the growing season. I mean, this is our livelihood. I'm not even sure I can unplug and be away from my crop," he said.

He noted that there's something to do with the crop every day in the arid west -- irrigating, scouting, spraying, cultivating. "It's the way I was raised and who I am to be very hands-on.

"But when our son, Brett, was younger and had a ballgame, we'd go to the game and missed very few of them.

But then, we often went back home and finished our work after that -- sometimes until the wee hours of the morning if it was required," he said. "Those are some of my fondest memories -- when we worked together to make our schedules work."

He recalled getting a big rainstorm in-season and running home to pack bags and drive to Mt. Rushmore in South Dakota. "We looked for opportunities to take family time and still do take those opportunities when we can," he recalled. "But we typically take our time more in the winter when things slow down for us."

Some of this diligence comes from the way he was raised. More was instilled during the 11 years the farm raised onions. The produce business puts a new definition to 24/7 diligence and assembly line kinds of work practices, Arnusch noted.

"I know that work/life balance is a bigger conversation all the time. But I do impress upon my staff that I don't look at what farmers do as a job. It's the greatest occupation in the world and we are privileged to get to do it. As such, what we do is often seasonal and there are going to be times when those hours aren't going to be like a typical job," he said.

"At the same time, you can take this too far and end up without almost no other life," Arnusch acknowledged. "That's why it's important to keep asking the question and we do discuss this within our staff with some regularity."

The inch of rain received this week came with a 10% chance in the forecast. "It's a little early for us to be getting monsoon moisture, but we'll take it. It's usually toward the end of July before we get those unexpected showers," he said.

The shower brought the crop springing back to life, he said. One thing he notices is how much more the crop responds to rainwater than irrigation water. He hypothesized that the total dissolved solids (tds) and salts within irrigation water take a toll on the crop over time.

"We know that river water is a better source because it is typically less salty and contains some other nutrients that are not within the aquifer water," he noted.

With weather patterns setting up to send the heat index into triple digits and beyond, Arnusch expected to see winter wheat and barley ripening in the coming week. "The barley is still showing some signs of immaturity.

"But one advantage we have here is good availability of grain storage on the farm. We'll always take it a bit on the wetter side and run fans to bring down the moisture," he said.

The pesky sawfly adult lays eggs in the crown of the wheat plant in early spring. Those eggs hatch inside the hollow stem of wheat and proceed to feed. "It seems like the wheat head literally falls off as the combine reaches it," Arnusch said. "If we can harvest around 14% to 14.5% moisture, the sawfly typically hasn't done its job yet." Tillage and planting more solid stem wheat varieties are also helping control the pest.

Barley seems less troubled, Arnusch added. Perhaps it's the tougher, more flexible straw of the barley plant. "Given the choice, the adult wheat sawfly will go to wheat every time," he said. Grasses can also be a host and wheat along field edges can be bothered more by the pest.

Milo is the other crop he's watching carefully. It's the first year for the crop on the farm and Arnusch said he's gaining an appreciation for its resiliency. "We're seeing it holds up to drought and wind.

"So far, we like the 30-inch row orientation versus a 7.5-inch spacing. It seems to canopy and tiller better in the wider spacing. However, we planted those wider rows with a row-crop planter and there's no question we had better seed-to-soil contact versus the grain drill, which is more of a controlled spill.

"The singulation with the planter was just so much better than it was even with the air seeder," he said. They planted milo at 44,000 to 50,000 plants per acre. 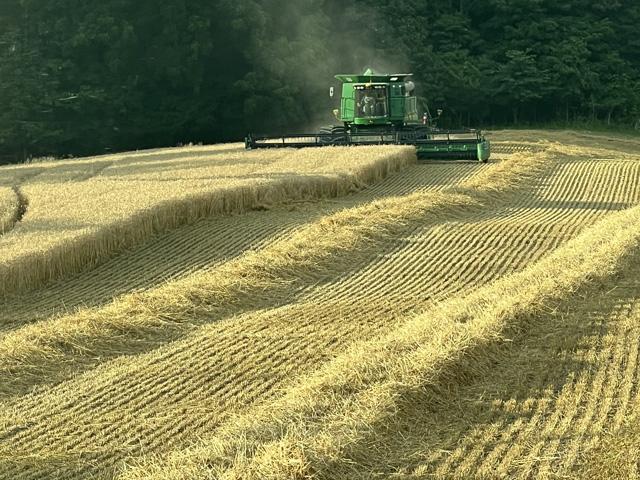