DECATUR, Ill. (DTN) -- Raindrops keep falling on Luke Garrabrant's fields and the Ohio farmer is starting to get nervous. A portion of his crop still needs planted and the calendar is telling him it is time to be done.

"We had some really good pockets of weather in early May, but about the time we get dried out and going, it rains again," said Garrabrant, who farms near Johnstown.

Meanwhile, Colorado farmer Marc Arnusch was marveling at the sight of mud on his Colorado farm. A 1.7-inch soaker had, for the moment, pushed the threat of drought aside. "I keep stressing to the farm staff that this week is an example that bad situations can change.

"As dire as things looked for us in March and April and even part of May, it is amazing how much this rain turned us around in the matter of days," said Arnusch. "That's what makes agriculture so great and sometimes so challenging -- things can change so quickly," he added.

Arnusch and Garrabrant report in each week as part of DTN's View From the Cab feature that covers crop conditions and a variety of other farm-related topics. Find last week's installment here: https://www.dtnpf.com/….

The discussion of weather isn't likely to go away soon in these farming regions, said DTN Ag Meteorologist John Baranick.

"A trough of low pressure has parked itself across central Canada and looks like it'll remain there through most of next week," Baranick said. "The trough will mean near to below-normal temperatures for both Keenesburg and Johnstown. Temperatures in both locations will reach up into the 70s most of the week, though a day or two reaching into the 80s won't be out of the question," he predicted.

"The trough will also guide several disturbances through the majority of the Plains and Midwest, bringing showers and some thunderstorms through at times throughout the week to both locations."

This week, the farmers talk about rain, planting, some new cropping experiences and why the solitude of the cab of a tractor, truck or sprayer is a favored spot on the farm to contemplate what's next.

This week, Arnusch made his View From the Cab report while doing some drive-by puddle gazing. The silt loam soils of the Prospect Valley will hang onto that moisture for a while, he said.

"It will be a week to 10 days before we can get back into these fields. We are saturated, and that is a word I haven't used for a very long time," Arnusch said. The rain came slow and steady. That too is rare, compared to the more temperamental events of past years, Arnusch observed.

"However, on barley, it is absolutely what the doctor ordered in terms of timeliness and quantity. It is really going to help us set the stage for what could be a remarkable barley crop," Arnusch said.

That optimism also increases the likelihood that barley will see some protective fungicide treatments. "We'll continue scouting wheat, but we are at the point of diminishing returns as to whether we'd get the application cost and benefit back," Arnusch said.

The corn crop is on the watch list this week. Arnusch said emergence has been less than ideal in some fields due to soil crusting. The recent rain might help urge gaps to fill -- although those plants would be several days behind.

As soon as fields are dry enough to traverse, western corn rootworm scouting in young corn will be first on the chore list. The farm uses traits to protect against the pest, but resistance is well documented in many areas and Arnusch likes to keep an eye on feeding levels.

"We know with traits that rootworm must ingest a little of the root to get the dose. We've already found a few larvae in the first instar stage and we want to keep track of them," he said. Colorado State University has done studies on the farm looking at possible resistance to below-ground protein traits, as well as chemistries used to control beetles above ground.

"So far, we've not seen resistance, but we are rotating traits to try to avoid that," he said. "Rootworm is one that really requires some detective work."

This farm is experiencing the first sorghum or milo crop since 1958. Arnusch said the cold fronts that moved through the area dropped soil temperatures and did not favor emergence "We need sustained 60- to 62-degree soil temperatures to see strong emergence," he said.

The sorghum was also planted into two different management configurations -- 30-inch rows and 7.5-inch centers. The narrower rows will be treated much like a cereal crop -- where crop residue is maximized to hold down weeds and drinks provided by flood irrigation. The 30-inch row sorghum will be treated more like a corn crop with some light cultivation done between the rows, which could be used for furrow irrigation.

"We've heard a lot of opinions, but the jury is still out and we are looking for the management style that rewards us best," he said.

All of these thoughts and questions swirl as Arnusch drives and looks at crops. Behind the wheel -- whether it is a truck or tractor -- is his thinking spot. Don't ask him for a music playlist though, because he uses quiet drive time to process. The younger generation can have the ear buds; he's too busy counting blessings to rock it out.

"The greatest amount of farmgate revenue comes from our seed production and our distillery grain. Barley is big for us in both of those sales areas and to have that crop looing decent really makes me feel good right now," he noted.

Are rains spotty if you live on the spot? Garrabrant's fields gathered close to 2 inches of precipitation toward the later part of the week, while those only 10 miles away received one-quarter of an inch.

"I'm a little soggy right now," he said. He has about 75% of his corn crop planted, but reported that soybean planting was still lagging in his area. "It doesn't take long to plant once we get going, it is finding those windows that is hard," he said.

"I feel good about the way everyone else's crops look in this area, but I'm not as happy about my own," he added.

Inability to get fields to dry out has caused Garrabrant to change one set of plans so far. Last fall he planted 70 pounds per acre of a blend of cereal rye, clover and other species as an introduction to the cover crop concept. He intended to mow and bale the lush cover for cattle feed. Too many weather delays caused him to abandon that idea and instead, plant green.

"It was interesting because it wasn't really part of the plan to plant into something as thick and tall as that. And it really put the technology on the planter to the test," he said. The planter is outfitted with automated row downforce, row cleaners and an aggressive no-till closing wheel.

"I was impressed with the quality of planting I was getting. I didn't experience any wrapping issues. The closing wheels really seemed to seal the trench up," he said. "While I'm happy it is planted and how it planted, I am a little nervous about the grass tying up nitrogen."

He was hoping the added residue would allow him back in the field faster to burn down the cover. He planned on adding 28% (nitrogen) to his herbicide mixture as a carrier.

"I still have to make sure everything is compatible in the jar test," he said. On the wish list for next year is to add 2x2 fertilizer placement planter capabilities.

For this year though, he plans on sidedressing that corn. "I'm unsure as to whether the cover will allow a knife or coulter to slice through the thick cover. I do have a Y-drop toolbar for my sprayer if I need to go that direction," he said.

Beans have struggled getting out of the ground in some areas, he reported. Recent rains have likely helped that situation though. So far, most farmers seem to be sticking tight on cropping plans, he said.

Like Arnusch, Garrabrant enjoys fieldwork and time behind the wheel. "I'm pretty particular about the job I do and like to keep focused on what's going on behind me. So, I don't listen to much music or anything else while in the field. I want to know if there's an issue arising or something that needs my attention," he said.

"I also don't have Cadillac cabs. So, I guess all the clanging and banging is my music," he said.

Handling the stress of weather delays also draws a measured response from the young farmer. "I try to keep the mindset that there are things in my control and things out of my control. 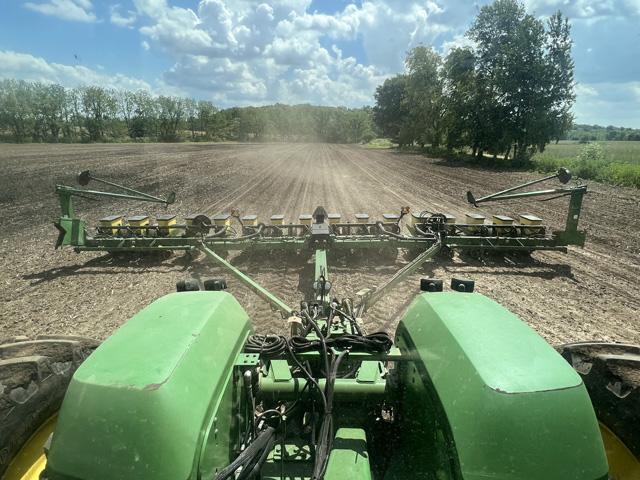