DECATUR, Ill. (DTN) -- Memorial Day has long stood as an unofficial line of demarcation for putting the planter away in many parts of the country. In Colorado, Marc Arnusch managed to squeak in just under the deadline.

A welcome shot of moisture spurred confidence to plant a few more acres of milo this week on Arnusch Farms, located in the Prospect Valley, near Keenesburg. Meanwhile, near Johnstown, Ohio, Luke Garrabrant was working feverishly to finish up corn and soybean planting.

Garrabrant and Arnusch are participating this season in DTN's View From the Cab series. The feature is a weekly look at crop progress and an exploration of other agricultural topics from geographically different farming regions. This is the fifth installment of the reports.

Weather has already been a consistent theme for these two farmers, and the forecast for the two areas is no different for the coming week, observed DTN Ag Meteorologist John Baranick.

Keenesburg has a chance for showers Sunday afternoon and Monday. As is typical for the region, the showers will be hit-or-miss. "That will come with falling temperatures as a front moves through the area," Baranick noted. "Highs on Saturday will be in the upper 80s, but only in the mid-60s on Monday. There could be some additional showers Tuesday and Wednesday with the cooler air running into the Rockies again. This time, it won't create snow except maybe right up against the Rockies."

Meanwhile, Johnstown is still trying to dry out. "Temperatures will be on the rise instead of falling with highs in the mid-60s climbing to the middle 80s for Monday. The front that goes through Keenesburg will eventually get to Johnstown, but not until Thursday (June 2) and will come with some showers and cooler temperatures as well," Baranick said.

This week the two farmers talk about planting progress, pests they are watching for and an appreciation for the veterans and family that worked hard to create the freedoms they enjoy on the farm.

After a rollercoaster spring and wishing for dry weather, Garrabrant now feels a little guilty wishing for a splash of rain to delay fieldwork so he could catch up with other activities. He got more than he bargained for when a nearly 2-inch soaker kicked off the weekend.

There's no shortage of chores to fill the time. People get tired, but even the equipment was starting to feel the strain of the season and needs some tender loving care, he noted.

"It's routine for us to grease and check over the planter and spreader -- things we use all day long -- before we start each workday," Garrabrant said. "But we need some shop time to catch up on some wear-and-tear maintenance, such as cultivator sweeps that need replaced," he said.

He records engine hours and use hours on implements to try to head off equipment downtime. "I really like to be proactive than reactive," he said. So far, he said finding parts to make repairs have not been an issue in his area.

This week he worked to finish cleaning up a farm that he and his father purchased recently. Some of the land had been divided into pastures and was overgrown with brush. "We've been taking out fences, opening that land up and getting it worked down so we can put the finishing pass on it and get it planted," he said.

Statewide, topsoil moisture conditions were rated 3% short, 61% adequate, and 36% surplus. The average temperature for the week ending May 22 was 67.0 degrees, 4.6 degrees above normal. Weather stations recorded an average of 1.73 inches of precipitation, 0.92 inches above average, with the largest amount of precipitation falling across the Central Lowland region.

"Most of the driest ground has been planted and some of that pushed the envelope. Some farmers started opening up wet fields trying to get them to dry out to plant," Garrabrant reported. "We're making progress, but we're not quite to the finish line on planting in this area."

His wheat crop got a fungicide treatment this week -- the last pass that crop will get before harvest, which should be early July. Some of the early planted corn will be ready for nitrogen sidedressing in the next two to three weeks, he said.

"If we start getting moisture and heat, corn really grows quickly here," he said. "Hay is ready to be cut when we can get to it."

This year Garrabrant had an opportunity to lease some property that members of his father's family homesteaded in the early 1900s.

"I purchased the homestead on Dad's mother's side of the family. Now, there's this connection on Dad's father's side. It's hard to explain the feelings that I have surrounded by all this history and the connection to it," he said.

There's been other reassuring, if not downright quirky, signs that this legacy to farm is meant to be. Last spring, Garrabrant got a call from someone out of the blue wanting a stand of hay seeded on their ground. It was 12 miles or about 20 minutes from home, but it was a large enough job that he deemed it worthwhile.

"Later, looking at some old plat maps with Grandpa, I learned this farm -- that I knew nothing about, other than it was an opportunity -- was part of the original farm my family settled on in 1846," he said. "It still blows my mind. I don't know if it is fate or what you call it, but it's a neat feeling that I'm starting to acquire -- whether through rent or own -- land that ancestors of mine have worked.

"I sometimes think about what it would be like to tell those same farmers how we are now farming in three counties and traveling 30 miles to do it. I think their reaction would be priceless," he said.

Similar thoughts about legacy and commitment visit Arnusch in times of reflection. Memorial Day carries special meaning for him since many of his family, and his wife, Jill's family, have military backgrounds.

"I think about their sacrifice that allows us to do what we do. And, lately I've increasingly been thinking about all the friends and family that just aren't here anymore and the many fantastic farmers that have taught me so much over time," he said.

That doesn't mean he won't be more than a little bit pleased if rain drops spoil a few parades, picnics, and other festivities this weekend.

"Last weekend we had about 0.35 inch at the farm. That has been the booster shot that keeps us moving down the track. It is helping extend our irrigation water supplies by one to two more days.

"And, river conditions are improving. We're starting to see the snowpack come off and we are in priority within the river that we can start pulling some additional irrigation supplies," he said. Priority determines the order in which claims are filled or the farm's position in line based on water decrees.

"That just wasn't something that was even possible, a month ago or two months ago. We are starting to see a small marginal improvement in our outlook," he said.

The moisture encouraged some additional milo planting this week. The farm is now 100% finished with spring planting. That puts them slightly ahead of USDA-NASS crop progress projections for the state. On May 23, Colorado was rated as 66% planted on corn versus 41% last week and 72% for a five-year average. Corn emergence was ranked at 30%.

Arnusch said it appears crops on the farm escaped frost and freeze injury from the winter blast last weekend. However, he noted that about 30% of their barley acres had already succumbed to wind damage. Winter wheat acreage is down 50% from the one-two punch of drought and wind.

"We'll still have seed wheat and the majority of our seed barley acres to harvest," he noted. "We're growing certified barley seed and registered foundation barley seed. This year, we even have some breeder class barley that will go for seed increase for the 2024 or 2025 crop." In addition, they grow artisan grains for the brewery and distillery industry.

Seed and value-added cereals require intensive management. Arnusch, who is Certified Crop Adviser (CCA), considers the farm's approach toward input use as preventative in nature.

"With fungicides, for example, we are waiting and watching for the right kind of conditions -- humidity values, crop canopy size, temperatures (both day and nighttime).

"This year, we are trying to thread the needle on what is less than a stellar crop to make that fungicide treatment do the most for us," he said. "We're getting very close to needing to put on a second pass of fungicide on wheat and our first fungicide pass on barley."

Stripe rust is a big issue in eastern Colorado, he noted. "That flag leaf is your last, best effort to build test weight. If we can keep it clean and healthy, we can push test weights and sometimes, even improve protein content," Arnusch said.

He also keeps a keen eye out for any sign of wheat streak mosaic. The notorious wheat curl mite takes up residence in volunteer wheat and spreads this deadly disease. "Controlling it requires management and variety selection, rather than fungicides," he said. "Scouting now lets us know what's coming and how best to handle it."

Barley is not immune from disease concerns. "Head scab, stinking smut, black smut ... we're looking at the crop very early at joint or even in the boot to see where we are at with those diseases," he said. "A lot of those are tackled with a good seed applied technology at planting. But now is also the time to measure the efficacy of what we put on the seed and see what is work and what is not, so we can plan for next year."

Arnusch noted that transparency is important with specialty buyers as some are pushing harder for more information on input use and increasingly like the concept of biologicals over synthetic inputs.

"But at the end of the day, we have to protect the crop," he said. "So, we use an all-of-the-above strategy to make sure we are putting the best investment out there to balance the pests we are trying to control with environmental factors."

Still, like Garrabrant, he wouldn't mind putting cropping concerns on pause for a day or two.

"There's something about this holiday that always seems to offer a chance to take a deep breath and to rebalance ... before we push forward into our summer cropping activities," Arnusch said.

"I'd be happy to spend it posting pictures of my rain gauge with something in it," he added. 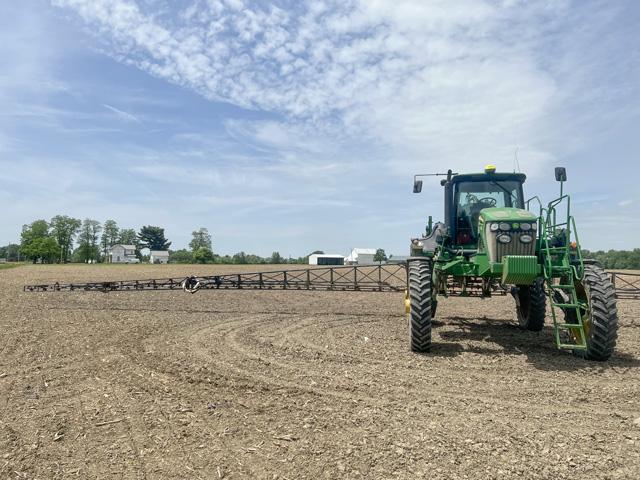