It all started when the Ontario farmer began using Twitter to post before and after pictures of spit-shined farm equipment.

Soon other farmers were scrubbing behind their front fenders too. A farmer friend slapped the #AndyClean hashtag on the phenomenon -- sort of a rural Good Housekeeping seal of approval, if you will. The thing caught on, and before long, #AndyClean was a thing.

Pasztor is still amazed by the response to #AndyClean and where it has led. Last year, John Deere invited him to the Farm Progress Show to shine up some of the equipment on display and shake hands with followers and fans.

"I'm not an all green guy, so I was kind of surprised. In fact, about half my stuff is red," he said. Pasztor farms with his father, Arpad, and brother, Mike. They raise vegetables, traditional row crops and sell seed in southwestern Ontario, near Hemlock, along the shores of Lake Erie.

When Pasztor came back to the farm after college, tending the equipment lineup became part of his job description.

"I'm going to tell you right now that I'm not the world's best mechanic or anything. But I'm the guy on our farm that services all the tractors and gets them ready for spring. Once I've done that, I just start washing them up. I've always been a stickler for keeping things clean," he said.

Even the Ertl toy tractor set he grew up with was handled with kid gloves. "I wouldn't let my brothers touch it because I knew they would mess it up," he recalled. "I've just always liked to keep my stuff in a particular way," he confessed.

He recalled that his grandmother and mother were always neat freaks. A couple of uncles always kept things "super clean."

That doesn't mean his proclivity to polish necessarily extends to housework duties or washing jeans. "I've got young kids and a golden retriever. (Removing) dirt on farm machinery isn't so bad," he joked.

Besides, there's value in being meticulous about machinery, Pasztor believes. "We don't run a lot of new equipment. We try to take care of what we have and make it last. But used equipment prices have gone through the roof, and if you are going to sell, it pays to make sure it is clean.

"You can tell a lot about a piece of equipment by how the farmer took care of it," he added.

Pasztor keeps it simple when it comes to cleaning tips. For those who want to try their hand at detailing equipment, he said there's no right or wrong way to #AndyClean.

"Blow off the machine first, and then just keep washing it until it is clean," he said. "Take your time. It's not a race. Get yourself a short wand for your power washer so you can get inside tight spots and all the nooks and crannies of the equipment being washed," he suggested.

"There's just no substitute for elbow grease when it comes to cleaning," he said. Don't forget the tires. "It doesn't matter how clean the tractor is, if the tires are dirty, it still looks dirty," he said.

During the winter months, he may spend the equivalent of a few days detailing a tractor inside and out. Combines take longer. "But I'm not working on it 12 hours a day. It's just something I like to work at and do when I have time to do it," he said.

The more you clean something, the easier it is to keep clean. His planting tractor is also used for sidedressing and to pull the grain cart. So, it gets washed up between those operations; in-season and deep cleaned at year end.

Pasztor has been experimenting with an #AndyClean soap. That project is taking a little longer than expected, but he hopes to have a product ready by spring. He is occasionally asked to do some professional detailing of equipment, but he likes to farm too much to make it a job.

After all, #AndyClean has never really been about commercialization. He finds joy in the camaraderie with others about a topic that is wholesome. It just feels good to connect with so many over something he loves.

The concept took on another life when John Deere provided #AndyClean stickers to distribute. Pasztor began sending the stickers to those who posted a photo of their cleanup job on Twitter.

"The requirement to receive a sticker is that the machine be clean. That's it," he said. "When people started posting photos and actually putting the stickers on their equipment, it kind of blew my mind."

It was children posting pictures of their clean toys and pedal tractors that really grabbed his heartstrings. The demand for the small stickers for toys quickly outpaced supply.

In the beginning, Pasztor funded the mailings of these stickers from his own pocket. "I got to know the people at the post office really well. At one point, I was wondering what my wife would say if she learned how much I was spending on postage," he said.

Then, another miracle happened. People started sending stamps to help defray costs. To date, more than 700 #AndyClean stickers have been sent to all corners of the globe. He's still working through some of the donated stamps.

There are other things that make him shake his head too -- like the #AndyClean action figure that the marketing folks at John Deere had made for him. Even the sunglasses on the (don't call it a doll) figure resemble those Pasztor wears.

"Really, the whole thing has been kind of wild," he said. "This is just a way farmers can showcase equipment and take some pride in it." 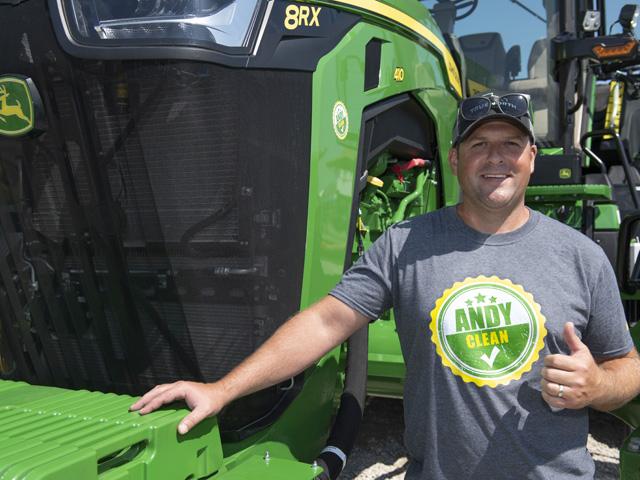