Editor's Note: This article has been updated to provide details about services.

Narayanan's death left those who knew him well or only through occasional professional or social media connections struggling with the loss.

A former Marine infantryman with close ties to his alma mater, Texas A&M, Narayanan, 46, had been working as a farm-management specialist in west Tennessee since July 2020 after an extensive career as a commodities analyst who made connections nationally.

Narayanan was pursuing a doctorate at the University of Memphis and conducting research on food and national security.

Last Friday, he posted on Twitter that he had started an introductory essay looking at the intersection of agriculture and national security. The paper looked at the research question of conflicts to gain natural resources, making the case for incorporating food and agricultural concerns into a country's national security strategy. Narayanan's brief posting on his paper called for an interdisciplinary approach to researching the question.

"This author believes that factors including (but not limited to) growing population, particularly in urban areas that are far removed from their food and agriculture production sources; climate change; supply chain disruptions; and trade all contribute to national security concerns, with respect to food and agriculture security. Indeed, in addition to the issues surrounding threats to a nation's energy supplies (i.e. oil and natural gas), the ebb and flow in the supplies of 'wheat and other essential grains ... feed fears of the future and raise the specter of civilization as we know it disappearing altogether.'"

Darren Hudson, an agricultural professor at Texas Tech University, conversed with Narayanan over the phone on agricultural topics. Hudson saw Narayanan's Twitter post Friday about his essay and the two of them exchanged multiple messages Friday and Saturday on the topic.

"He had really honed-in on the context of food and national security, and I wanted to see what we could do to help work on that paper," Hudson said.

Hudson said they agreed early Saturday afternoon to set up a phone call on Monday. By Saturday night, Narayanan had died.

"It just totally shocked me," Hudson said. "Our interactions were always positive and always beneficial in both directions. It's a sad story."

By Monday, Twitter was filled with posts of grief and shock that Narayanan had died, with comments from people who knew him from his college and Marine Corps days to people who only knew Narayanan through his Twitter posts.

His wife, Aparna Basu, posted on Twitter thanking #AgTwitter for their memories of her husband. "I know I've been horrible at communicating here, but I'm humbled to see how much he was loved ... . I miss him terribly ... but am grateful to everyone."

Ashley Stokes, dean of the University of Tennessee Extension, released a statement that officials and employees were saddened to learn of Narayanan's passing.

"He began his career with us last July and has been a tremendous asset to agents and producers. As a member of our excellent Extension Farm Management team, Chris was always eager to share his expertise with farmers, ranchers and rural agribusinesses in person and on social media. He brought a diverse background to UTIA, ranging from service in the Marines to Wall Street," Stokes said. "Chris' passing leaves us with a heavy heart and we ask that you keep his family in your thoughts and prayers."

DTN Farm Business Editor Katie Dehlinger had known Narayanan for more than a decade. She summed up some similar comments for those who knew Chris on a personal level.

"I don't know who said it -- but there's a saying that people will always remember the way you make them feel. Chris made everyone around him feel important and valued," Dehlinger said. "He knew his opinions and respected others'. He stood up for other people. He went out of his way to be helpful. Always kind."

In one of their last conversations, Dehlinger said she and Narayanan talked about how much he enjoyed working for Extension in Tennessee.

"His days on Wall Street were a different kind of stressful, but in what he was doing these days, he felt like he was genuinely helping people. He was working on his Ph.D. thesis -- why agriculture is more important to national security than just food security. It seemed like the exactly perfect topic for him."

Isaac Olvera met Narayanan when Olvera was a commodity analyst for Informa Economics in Memphis and Narayanan was working in a sales position. Narayanan took the time to talk with Olvera about livestock markets and became close friends as well.

"He always said he was picking my brain and wanted to know what I was seeing in the markets, but he gave me a lot of advice as I was starting out as a young analyst," Olvera said. "I look back on it and I feel like he was mentoring me the whole time. He had all of these years of experience and a lifetime of knowledge, and he was taking time out of his day to just sit down with someone who was just starting a career to help them learn what was important in a marketplace and how to talk to people, how to just hold a conversation ... He never hung his hat on his accolades."

Olvera said August was a difficult time for Narayanan and he had recently lost a close friend.

Olvera added that Narayanan had been a mentor to other Marines and was also a strong faith-based person. "He was very steadfast in his belief," he said. "The fact is that you know people like Chris, even strong mentors and people who are reliably faithful, struggle too."

Narayanan graduated from Texas A&M University in 2000 with a degree in agricultural economics with a focus on farm and range management. While continuing to serve in the Marine Corps Reserve, he received a master's degree in rangeland ecology and management from Texas A&M as well. While at A&M, he competed on the university's rodeo team. He rode saddle bronc and was a member of the Professional Rodeo Cowboys Association. He carried his PRCA card in his wallet long after he stopped riding.

Narayanan worked for various agricultural consulting firms and brokerages. Working for AgriLogic Inc. in College Station, Texas, he designed and organized a team for a contract with USDA's Risk Management Agency to develop a cow-calf decision support tool. He later worked for John Deere to help develop risk-management tools for its customers. After completing his MBA at the University of Texas, he worked for a hedge fund in Dallas and then later at Morgan Stanley. From 2011 to 2016, he was head of Agricultural Commodities Research at Societe Generale (Soc Gen) investment bank in New York.

He was profiled in 2014 on the website Business Insider as a commodity analyst on the Pro Farmer Crop Tour (https://www.businessinsider.com/…). He talked about the willingness to get into fields to get his hands and boots dirty.

"This is something I like to do because there's only so much I can tell sitting behind a screen," Narayanan said. "I like to get out there and see what's going on."

After serving as an account manager for Informa Economics in Memphis, Tennessee, Narayanan founded GA Capital LLC to advise companies on mergers and acquisitions.

Narayanan became a voice in the agricultural industry for his market insights, appearing frequently on CNBC, Bloomberg and in the Wall Street Journal.

In 2017, Texas A&M's Department of Agricultural Economics awarded him with its highest honor, inducting Narayanan into the Tyrus R. Timm Honor Registry. (http://tyrustimmregistry.org/…)

Fond memories and expressions of sympathy may be shared at www.MemphisFuneralGermantownParkway.com. 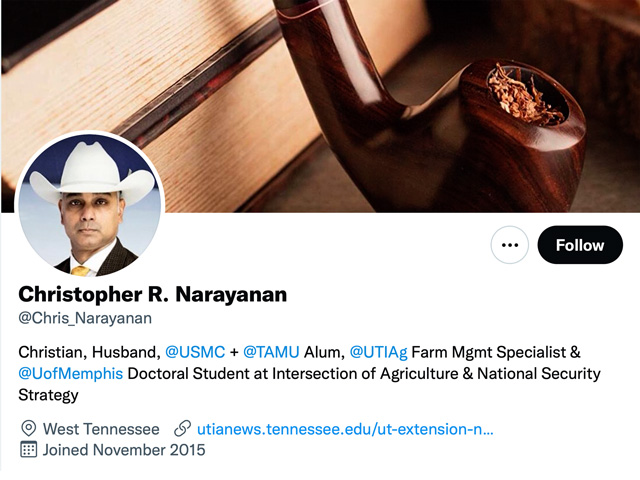