OMAHA (DTN) -- With harvest underway in some areas of the Corn Belt and beginning soon in others, farmers will be busy collecting and storing millions of bushels of grain. While agriculture is already a dangerous occupation, working with stored grain can be especially hazardous.

Basic safety rules and specialized equipment can be used to keep those who work around stored grain safe. While keeping grain in good condition does not assure grain bin safety, it will limit the instances of dangerous grain bridges.

In 2020, 64 fatal and nonfatal cases involving agricultural confined spaces occurred, according to Purdue University Extension, which tracks these statistics (https://extension.entm.purdue.edu/…). This marked a 4.5% decrease compared to 2019.

"Regardless, the frequency of documented cases remains a concern considering the substantial resources being invested in solving the problem," the report stated.

The state of Illinois reported the most cases in 2020 with 17. This was more than double the next two reporting states, Minnesota and North Dakota.

Like any farm accident, the thought "It will never happen to me" is a common misconception, according to Emily Krekelberg, University of Minnesota Extension educator, farm safety and health.

Farmers do the same tasks over and over; often, this lulls people into a false sense of security, she said. This is when accidents happen.

"It really is a mindset which needs to be altered," Krekelberg told DTN. "You need to always be aware of the hazards and mitigate the risks."

For a personal perspective on the devasting impact of a grain bin accident, see "A Letter to Brian" at https://www.dtnpf.com/….

Krekelberg said there are basic safety recommendations when working with grain bins.

The first is to utilize lock out/tag out equipment when working on grain handling facilities. This practice of physically putting a lock on the supply of power to the equipment would keep someone from starting the unloading auger, for instance, while someone else is working on it, she said.

Another basic safety rule would be not to go into a bin. If you would have to go in, Krekelberg recommends farmers use a safety harness.

Those who work with stored grain should educate themselves on the dangers of grain bins and flowing grain, she said.

Krekelberg said that, often, farmers cite the lack of available funds as an obstacle to purchasing grain bin safety equipment. There are ways around this, she said.

Shane Stutzman with Hynek Construction of Guide Rock, Nebraska, said he believes grain bin manufacturers are working toward more of a zero-entry policy, but those who work with stored grain know they still have to enter bins at certain times. However, there are practical safety rules that can be followed, he said.

This list includes using a safety harness, which would be tied to an anchor point in the bin, and never working alone. Other safety rules would be to have a fully charged cellphone and perhaps most importantly to know the condition of the stored grain, he said.

When grain goes out of condition, a crust can cause an empty cavity that can collapse, which could engulf a person in a split second. Out-of-condition grain makes the situation much more dangerous, Stutzman said.

"I would encourage anyone in this circumstance to reach out and get help unloading the bin," he added.

Stutzman said there are many tools available today to closely monitor the condition of the grain. These products can even control fans to avoid the issues that cause grain bridging.

He recommends a system with a moisture cable and automatic fan control that logs the data on the cloud where it is easily accessible to keep tabs on the grain. This system would alert where the hot spots are in the bin, but more importantly, it would run the fans automatically to prevent a dangerous spoiled grain situation, Stutzman said.

If cost is a major consideration, there are different systems available at different price points.

Other factors, such as age/physical ability and the size of the grain bin also should be considered with grain bin safety.

With the average age of farmers 57.5, according to the 2017 USDA Census of Agriculture, Krekelberg said age is a factor with grain bin safety.

Older folks or those not in good physical shape may not move around as quickly as they once did. These people should ask themselves if they can still physically perform tasks such as removing grain from a bin, she said.

"Having someone else around to respond would also be a good idea," Krekelberg said.

Stutzman noted farmers are building larger grain bins compared to years ago. With more bushels in larger bins, this increases the risk of being engulfed.

Those working with larger bins need to keep in mind the unloading equipment is usually much faster, and even with grain that is in good condition, it can be easy to become submerged and engulfed, he said. The grain avalanches down to the center are much greater in larger bins compared to older bins with only about 6 to 12 feet of grain flowing.

"In a larger bin, that area of moving grain can be much deeper, so with a greater scale of grain (flowing) comes more danger," he said.

North Dakota State University Extension has a resource page on grain bin safety. You can view it here: https://www.ndsu.edu/….

The site also has figures diagraming how flowing grain can engulf a person with bridged grain, the collapse of a vertical mass of grain and how fast flowing grain makes someone helpless.

Penn State University Extension has a nearly 15-minute video on their website detailing grain bin safety. This site can be found at: https://extension.psu.edu/….

Read more about the movie "Silo" that brings the reality of grain entrapment to life: https://www.dtnpf.com/… 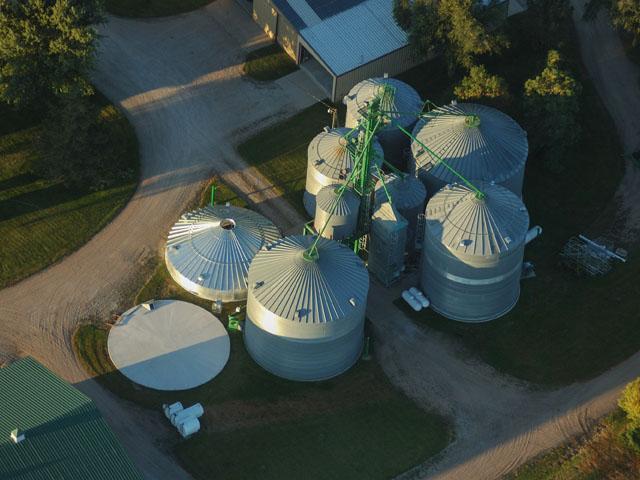