When Michael Lowder starts calling off the names of some of his favorite four-legged patients -- Henry, Nacho, Olivia, Clementine, Lee -- it might be easy to assume he's talking about farm dogs or barn cats. You'd be wrong by several tons. Henry and Nacho, they're hippos. Olivia, Clementine and Lee are all rhinos.

It's an unusual group of patients for a Watkinsville, Georgia, veterinarian. But his special relationship with these and a menagerie of other oversized and exotic patients started 20 years ago with a zebra, name unknown. Lowder was speaking at a veterinary conference in Orlando when the topic of dental work in horses came up. An attendee asked if he would be willing to take a look at a zebra, and in typical Lowder fashion, the veterinarian said, "I wouldn't mind at all." The rest is history.

That first zebra led to another, and another, then to more species. Today, the University of Georgia ambulatory veterinarian spends all his consulting time doing dental work on zebras, hippos, rhinos, elephants and even a few Somali wild asses, hartebeests (African antelopes), yellow-backed duikers (another flavor of antelope), okapi, which are related to giraffes but sport stripes like a zebra, and babirusas, a type of wild pig. He casually mentions, "I did a tiger the other day, too. But, mainly I work on hoofed stock."

There aren't many how-to videos available to prepare someone to perform a rhino root canal, but Lowder downplays the challenges.

"It is nothing more than learning on the job and looking at a lot of different animals," he says. "I'm a dinosaur. Things have gotten so specialized, I'm probably one of the last people to work on different species."

HORSE OF A DIFFERENT STRIPE

When it comes to dental work, the 62-year-old veterinarian and graduate of Alabama's Tuskegee University College of Veterinary Medicine has had 32 years of experience. Working on equine teeth is physically demanding and usually not a veterinarian's favorite chore. Lowder ended up with most of the cases straight out of the chute. At 6 feet 2 inches tall, he says, "I was young, low on the totem pole and a big fella."

A lot of those skills and the dental equipment transfer fairly easily, especially with zebras, who require much of the same dental work as horses. But, when it comes to his more supersized patients, Lowder works with a fabricator to modify or make instruments specific to the case. It's that ability to adjust to a variety of conditions that makes this veterinarian so good at what he does.

When Lowder works on zebras, for example, he may use a dark box such as the ones used for artificial insemination (AI) in cattle. In the case of rhinos, hippos and elephants, they are often trained with positive reinforcement to amble into the chute and open their mammoth mouths on command. He takes a peak with a small flashlight to see if anesthesia is needed. If it is, he leaves that to an experienced anesthesiologist, noting it takes different anesthetics than the ones used on domestic animals for these patients. "These are wild animals, and they aren't meant to go down. Anesthetic is tough on them," he says, adding the drugs are dangerous to humans.

Lowder has had his share of close calls. "A zebra is just a souped-up mule waiting to kick or bite you," he says. "They can kick you into next week."

Doing dental work on exotic animals can also be time intensive. Even with travel time, Lowder can easily float (file) the teeth of eight to 10 horses a day. With zebras, and with the right people and facilities, he can come close to that. Recently, he worked on 17 in three days.

"With a hippo, though, we can only do one a day. It takes so much equipment, it is overwhelming," he says. "It takes a lot of pulleys and ropes to get a 6,000-pound animal in position."

In the little time he has off, you'd think Lowder would seek exotic adventures. Nope. The low-key veterinarian relishes the occasional quail hunt, but mostly, "I enjoy piddling around here," he says of the farm he shares with his wife, Lorelei, also a veterinarian with a booming show-pig enterprise.

Lowder uses his master's degree in cattle reproduction to AI his purebred Angus herd, and he's modifying his working facilities to make it easier to handle cattle by himself, since his five children have left or are leaving home. "I'm going to put in a concrete trough and lights, and fix my pens," the cattle producer says.

In the meantime, Henry, Nacho, Olivia, Clementine and Lee will be waiting for their next appointment with the dentist. And Lowder will be there.

Michael Lowder depends on good people to keep him safe when practicing dentistry on exotic animals. In turn, good people depend on him to give the animals in their charge the best possible care. One of the more famous patients he's treated was Tadpole, a Nile hippo, who had a toothache about 10 years ago. His handlers knew this because they had trained Tadpole to lumber into his chute and open his mouth.

Clayton Hilton, then deputy director at Alabama's Birmingham Zoo, says, "He was gentle as can be and trainable. He'd do anything for a banana. There wasn't even a pole behind him, but he'd stand there all day as long as he'd keep getting bananas."

While in the chute, his handlers would check Tadpole's teeth and use a wire saw to cut the tips off if there were any sharp edges. Hilton, now wildlife veterinarian at the Caesar Kleberg Wildlife Research Institute at Texas A&M University Kingsville, explains a hippo's teeth grow continuously. In the wild, they wear down, but Tadpole had such a cushy life, his teeth grew too much. Hippos don't have nerve endings in the end of their teeth, and normally having them trimmed isn't an issue. Tadpole got a bit touchy with one tooth.

As it turned out, Tadpole's aching tooth needed to come out. "Putting an animal that size under anesthetic is a huge deal," Hilton says. "Their own weight pushes down on their lungs, and they can't breathe as deeply as normal."

While zoo veterinarian Stephanie McCain administered the anesthetic, Lowder and Hilton laid down on the ground with Tadpole and extracted the tooth. The anesthetic was reversed, Tadpole got up and walked off, happily eating his bananas. Tadpole went on to be one of the longest-lived Nile hippos known in captivity. He died at age 41, still living at the Birmingham Zoo. 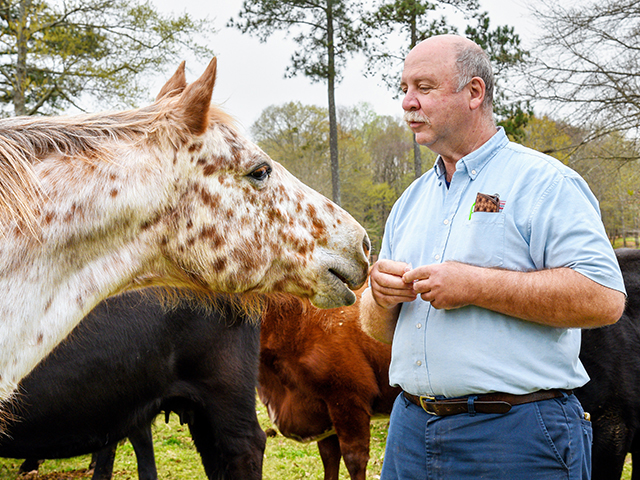