OKMULGEE, Okla. (DTN) -- While USDA faces a court battle with a group of white farmers and conservative legal groups over loan-debt relief to minority farmers and ranchers, Jared and Sheila Wilson must find a new place for their cattle to graze.

The couple, who are members of the Muscogee (Creek) Nation tribe in eastern Oklahoma, are among roughly 16,000 minority farmers whose FSA loan repayment is on hold as a federal judge in Wisconsin decides whether to transform his temporary restraining order into an extended preliminary injunction against the debt relief.

The Justice Department -- responding to the court case for the U.S. Department of Agriculture -- filed a brief late Friday asking U.S. District Judge William Griesbach to reject the preliminary injunction and allow USDA to move ahead with roughly $4 billion in debt relief to minority farmers.

The Wilsons have 55 crossbred cows, most of which have calves right now. They are also looking for pasture after their previous landlord passed away and his heir sold the land the Wilsons used for most of their cattle. The couple bought their cattle in early 2020 after getting a $46,000 loan from FSA.

"For the most part, we just have mama cows and calves, and a little hay," Sheila Wilson said.

The Wilsons filled out paperwork for the loan to buy 35 cows, two bulls, a hay trailer and cake feeder. USDA put a lien on the cows and the equipment "We're just getting started," Sheila Wilson said. "Once we got the loan, we started buying cows in 2020, but we've both been around them all of our lives. My dad raised cows for a long time, and I would help them."

The Wilsons had heard there could be loan-debt relief coming from USDA and Sheila Wilson said she called the local FSA office a couple of times asking about possible details. "We then basically got a letter in the mail that said you are eligible for the payoff, but the letter just basically told us to hold tight and wait."

Sheila Wilson added she knew several other younger Muscogee (Creek) Nation members who had gotten FSA loans and bought either land or livestock.

Farmers and ranchers in the state are coming back into local USDA service centers to declare their Native American status. USDA has informed farmers that they need to have form AD 2047 on file to designate their race or ethnicity.

Even as Oklahoma could see the biggest benefit from loan repayment, members of the Oklahoma Farm Bureau see it as a divisive provision, said Rodd Moesel, president of the group.

"From our state standpoint, it's probably a tremendous economic development opportunity and a chance to bring more money into our state's economy," Moesel said. "But we have a lot of members when I'm at a county meeting that are distressed that more discrimination is not a good way to solve past discrimination."

At least seven federal lawsuits filed across the country by white farmers are challenging the constitutionality of USDA's program, which stems from Section 1005 of the American Rescue Plan, which passed Congress in March. The provision provided up to 120% debt relief to socially disadvantaged farmers under USDA Farm Service Agency loans. The relief plan would pay off roughly $2.67 billion in loans for minority farmers that were on the books before Jan. 1, 2021, along with another $414.9 million in delinquent debt to minority farmers. With the extra 20% added in to cover tax liability, that comes to about $3.7 billion in aid for an estimated 16,000 minority farmers.

In Wisconsin, U.S. District Judge William Griesbach earlier this month granted a temporary restraining order in a case filed by 12 white farmers with FSA loan debt. Lawyers for the white farmers from the Wisconsin Institute for Law & Liberty (WILL) want a preliminary injunction against USDA from paying off the loans until the court rules on whether USDA should have to pay off the debt for white farmers as well.

If USDA were to lose the case, the cost of the debt-relief plan would increase to about $31.7 billion for nearly 145,000 borrowers.

In its response, the Biden administration cited that Congress had evidence that minority farmers had been largely left out of recent funding and pandemic relief. Minority farmers also were at higher risk of delinquency and foreclosure on their farms during a global pandemic. USDA and the Department of Justice maintain the preliminary injunction should be denied. The brief said the white farmers who sued "cannot show irreparable harm." Because the funds granted under in the relief plan "are not limited and will not expire," the plaintiffs can seek monetary relief at the conclusion of the case if they are entitled to it.

Instead, the Biden administration states an injunction would "impose grave harms on minority farmers: those in bankruptcy proceedings would not get debt relief, those seeking future FSA loans will have their closings delayed, and those disproportionately at risk of foreclosure could lose their farms."

USDA adds the evidence of prior discrimination against minority farmers at the department's loan program "is vast." The brief cites reports from the U.S. Commission on Civil Rights going back to the early 1980s, pointing to the decline of Black farmers and problems with loan applications, loans being reduced and accelerated payment schedules. From 1920 to 1978, the number of minority farmers in the country dropped from 926,000 to less than 60,000. Effectively nearly 15,000 minority farmers left their operations each year during that time.

Scott on Monday issued a statement criticizing the lawsuit against USDA and arguing that debt relief is needed for Black farmers to survive. Scott said he is 100% supportive of USDA's efforts to fight the litigation. "This shameful lawsuit is racial discrimination at its worst against our nation's Black farmers and socially disadvantaged farmers -- and I do not say this lightly, because white farmers already own 98% of all the farmland in the United States and Black farmers own just 1%," said Scott said.

The government's brief cited that minority farmers are more likely to default on direct loans or face foreclosure and loss of land, the government's brief stated, citing a report from the National Young Farmers Coalition in 2019. A congressional hearing in 2019 also cited that Black farmers were subject to 13% of USDA loan foreclosures despite being only 3% of loan recipients.

USDA also pointed to pandemic aid numbers showing "almost all of the $9.2 billion for USDA's first Coronavirus Food Assistance Program (CFAP) last year went to non-minority farmers. The same held true for the $25.1 billion in aid for the Market Facilitation Program (MFP) in 2018 and 2019. Senate Agriculture Committee Chairwoman Debbie Stabenow, D-Mich., cited that the diminished relationship between minority farmers and USDA was such as that nearly three-quarters of Black farmers were not even aware of coronavirus relief programs last year. Aid is skewed to large farmers and the crops they grow, which are predominately owned by white farmers.

The Biden administration added there is strong evidence of lingering discrimination in USDA's farm loan programs. The department pointed to congressional hearings in 2019, and a Government Accountability Office report released earlier this year that examined racial and income disparities in access to financial services, including "minority farmers and ranchers."

In granting the temporary restraining order, the Biden administration cited that Griesbach relied on arguments made by the plaintiffs, "but respectfully, that reliance is misguided." Griesbach also concluded USDA had not established that the loan-forgiveness program targets a specific episode of past or present discrimination. Yet, the administration cites past Supreme Court decisions that recognize the government has a compelling interest in remedying the lingering effects of discrimination.

The National Black Farmers Association and the Association of American Indian Farmers also filed a joint brief supporting the Biden administration's position and opposing any injunction.

While waiting for the debt relief to come, the Wilsons see an opportunity to grow their cow-calf operation once the loan is paid off. "The main thing we would probably be able to do if we get the cows paid off is then maybe we can buy some land," Jared Wilson said. Sheila Wilson added, "My dad always told me cows can either pay for themselves or they can pay for land, but they can't pay for both." 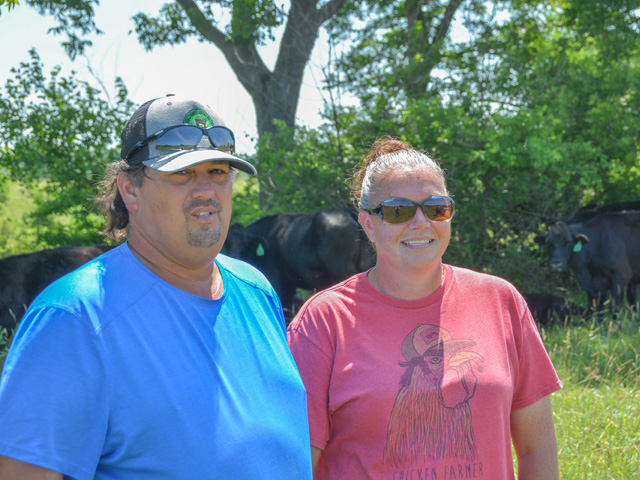