Perdue addressed the National Association of State Departments of Agriculture on Monday through a video conference as NASDA holds its annual meeting virtually this week. Perdue highlighted USDA's work on the Coronavirus Food Assistance Program, the trade situation with China, food-aid programs and recent disasters.

During a question-and-answer session with state officials, Louisiana's Agriculture and Forestry Commissioner Mike Strain talked about some of the disaster impacts in Louisiana from Hurricane Laura last week. The coastal area of Cameron, Louisiana, was left with almost 100% destruction from a tidal surge that reached 17 feet high, Strain said.

"Complete cattle herds are no longer there," Strain said. "Then there was a lot of structural damage to barns and other equipment also."

Strain asked Perdue if he anticipates an ad-hoc disaster bill that would address both the derecho that hit Iowa and Hurricane Laura. Aid was needed, Strain said, "because some farmers lost everything, their houses, their barns, their crops, their herds -- everything."

Perdue said USDA is trying to assess how much funding is still available from the Wildfire and Hurricane Indemnity Program Plus (WHIP-Plus) disaster program. WHIP-Plus was set up to help cover disasters from 2018 and 2019.

"With Congress looking at the Iowa situation and now the Louisiana hurricane situation," Perdue said he would not be surprised if Congress provides some changes to extend WHIP-Plus for the 2020 disasters.

Perdue noted farmers should still have the crop insurance safety net and commercial insurance for structures on the farm to help offset storm damages.

Pennsylvania Ag Secretary Russell Reading asked Perdue about the open-ended deadline for WHIP-Plus and whether USDA will put a deadline on disaster applications from 2018 and 2019. Reading indicated it would be hard to assess how much funding is left to help address 2020 agricultural disasters in as many as 13 states right now. Perdue said it was a mistake to not put a deadline on WHIP-Plus applications in the regulation and he acknowledged that needs to be addressed. Perdue said he and Undersecretary of Farm Production Bill Northey had discussed the issue last week.

Perdue reiterated comments he made last week that USDA is working on the rules for a second round of payments under the Coronavirus Food Assistance Program (CFAP). The secretary said a new round of CFAP will soon be announced.

USDA announced in May the $19 billion CFAP, which includes $16 billion in direct payments. Perdue said it wasn't understood clearly, but the losses for the initial round of CFAP went through April 15.

"That's why we have listened and will be coming out with the CFAP 2 program," Perdue said.

Perdue noted USDA has worked to expand commodities and different kinds of losses from farmers who do not sell traditional commodities.

Discussing trade, Perdue said U.S. agricultural sales have recovered from a slow start for the year due to the pandemic. "I think we have had a good year in spite of everything else," he said.

The U.S. Mexico Canada Agreement was signed and went into effect in early July, Perdue noted. The China phase-one deal for agriculture, "got off to a fairly slow start" with the pandemic, Perdue said. The secretary said China has "really stepped up" over the past six weeks in buying U.S. commodities, including corn and soybeans.

Perdue noted there was a lot of concern in early spring about Brazil's sales to China, but the secretary said he thinks the cyclical nature of commodity shipments will return.

"We think we will own that market probably through next January until the next Brazilian crop comes in and we believe China needs it. We think they are rebuilding their swine herd and so feed ingredients will be good."

China continues to make record buys of pork and beef as well as buying U.S. poultry again, Perdue said. Perdue also credited Chinese officials for removing some of the "non-tariff technical glitches that we've had for a long time.

"It's not perfect, but right now we're on a good run, and you know we really felt good about the phase-one agreement."

Perdue spotlighted much of USDA's work during the pandemic, including the Farmers to Families Food Box, which Perdue said "has been an overwhelming success in so many ways." The program got another $1 billion boost last week that was announced by President Donald Trump.

"I call it a win-win-win situation, helping our farmers have a market, helping those middle men in the middle, whose trucks and workforce were idle be able to go back to work, and certainly the best part of all was to be able to provide foods to those people who didn't maybe know where their next groceries were coming from," Perdue said.

Perdue pointed out, though, that the Farmers to Families food boxes are only authorized for the 2020 fiscal year, which expires at the end of September. "So we'll have to see if Congress wants us to continue that and they will let us know about that," Perdue said.

USDA just Monday announced some extensions and new flexibilities for school lunch programs. The new changes will ensure that schools can continue to provide lunches even if classes will be virtual. The new school meal flexibilities will run through at least Dec. 31. Perdue called the changes an "unprecedented move" to ensure students have access to food. The move drew praise from members of Congress, though lawmakers from both parties have called on USDA to extend the flexible rules for the entire school year. 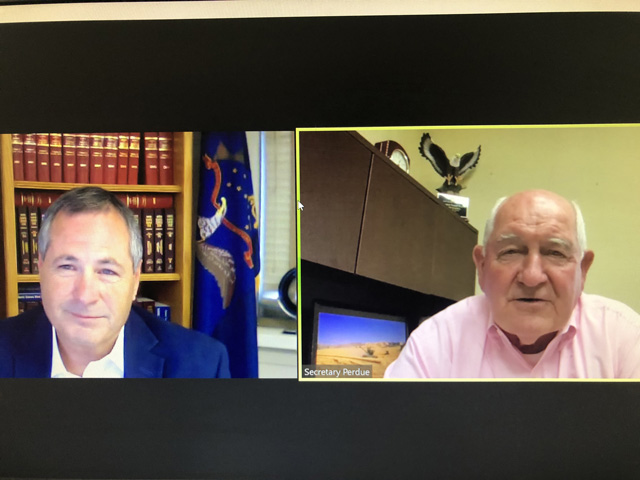