LINCOLN, Neb. (DTN) -- Rogelio Munoz Calderon worked for Tyson Foods in Dakota City, Nebraska, for 27 years and raised a family as a packing-plant worker in the northeast Nebraska town.

Munoz Calderon finally became a U.S. citizen last March, his son Christian said. "He was so happy and so proud."

He died in May from COVID-19 at age 52, less than a week before Christian's son was born. Christian, a former Tyson worker as well, brought a portrait of his father to the Nebraska Capitol on Thursday as the Nebraska Legislature became the first state in the country to hold a hearing on the toll taken on meatpacking plant workers during the epidemic.

The three-hour-plus legislative hearing was full of emotional details from workers, families, union representatives and advocates calling for the state to implement better worker protections. Nebraska's only Latino state senator, Tony Vargas, has been pushing during the summer session for a hearing on his bill. Time is short in the Nebraska unicameral session, and Vargas is now trying to get provisions on worker protections attached to another piece of legislation as the pandemic-shortened legislative session is winding down.

Packing plants are a critical part of the Nebraska economy in a state that has three times as many cattle as people. The state has multiple processing plants for cattle, pork and poultry, making it one of the most influential industries in the state.

Testifying Thursday, Vargas pointed out packing plant workers so far have made up roughly 5,000 out of 27,800 coronavirus cases in the state, and at least 21 workers have died. Those statistics don't include family members who contracted the virus from workers as well. Even higher, Vargas said Latinos make up 60% of total cases in the state and roughly 25% of the 347 reported deaths.

"If you look at Nebraska COVID-19 data, every county with a meatpacking plant in it is at the top of the list," Vargas said.

Vargas urged his fellow lawmakers to consider the pandemic is hitting minorities harder, including refugees new to the country. "We can't hide behind the fact that this is affecting people who can't speak out."

Vargas's bill would require social distancing at packing plants with barriers and other requirements to keep workers apart. The bill would not only require employers to provide masks but face shields as well.

The coronavirus has exacted a heavy toll on meatpacking workers. To keep the food supply operating and stop the back up of livestock needing slaughter, President Donald Trump signed an executive order in late April requiring companies to remain operating. The federal government also issued guidelines to companies on personal protective equipment and social distancing.

Nationally, according to data collected by the Food and Environment Reporting Network, at least 39,829 meatpacking plant workers have contracted the virus, and 184 have died. The Occupational Safety and Health Administration in July issued a bulletin requiring employers to report hospitalizations from COVID-19, but OSHA pulled that requirement from its website within days of issuing it without explanation.

Slaughter totals for beef have basically recovered from the crash in April and May as USDA shows both beef and swine processing at roughly the same capacity as a year ago. Industry estimates project there may still be a backlog of a million cattle and 3 million hogs that are behind schedule in going to the packing plants. The plant shutdowns and slow processing since this spring also have cost livestock producers billions of dollars in lower prices. At least some have been forced to euthanize animals.

Advocates for refugees testified they are scared to go to work, but afraid to speak out because of their refugee status. Andrea Skolkin, chief executive officer for One World Community Health Centers, an operator of health clinics in low-income areas, told lawmakers the clinics are overwhelmed.

"There have been so many ambulances coming into the health centers because the conditions of people coming to us is so severe," Skolkin said, describing one situation where man who was an expectant father came into the clinic, but died on the way to the hospital.

Multiple workers, and former workers, at JBS in Grand Island, Nebraska, testified about the struggles with masks. They are given one mask at the beginning of a shift that becomes soaked with water, blood and sweat within a few hours. William Matamoros said he was fired at JBS for complaining about the problems with masks.

"It's really hard to work eight straight hours when your mask is wet and soiled," Matamoros said through an interpreter.

Eric Reeder, president of the United Food & Commercial Workers (UFCW) Local 293 in Nebraska, testified that conditions have worsened only because there are fewer workers and those who report to work are being asked to do the jobs of two to three people. That's led to more work-related injuries, he said. Also, there may be social distancing on the plant floor, but that doesn't apply in locker rooms or stairwells in places that have old ventilation systems as well.

"If you are sick in the locker room, it just hangs in the air," Reeder said. "The employers, as long as they are not mandated, they aren't going to do it."

Graciela Billington, a union steward at the JBS plant in Grand Island, told lawmakers that one of the more demoralizing events last month was when OSHA inspectors toured the JBS plant, but only walked through parts of the plant that management wanted to show. "A lot of people were looking for OSHA to do something on that day, but they only went to the parts of the plant that were really clean," Billington said.

No one at the hearing testified against Vargas's legislation. Throughout the pandemic, packing plant companies have written Gov. Pete Ricketts, encouraging him not to take any actions that would affect processors. Smithfield Foods and Tyson Foods have each published advertisements in newspapers defending their workplace practices and calling out critics.

Like Christian Munoz, others who testified Thursday were the sons and daughters of workers who became infected and were hospitalized. Eliana Ramirez, who works as a respiratory therapist in Omaha, said her dad, mom, sisters, aunt and cousins were all infected with the virus. Her dad, who also worked for Tyson Foods in Dakota City, was hospitalized and put on a ventilator, but he has recovered and is working again. "That was the worst nightmare for me when I found out my dad was being put on a ventilator because I see that every day," Ramirez said.

Ramirez criticized the slow response from both companies and the federal government to implement safety measures when packing plants began to get hit hard in April. "The government has just kind of winged it and hoped for the best," she said. 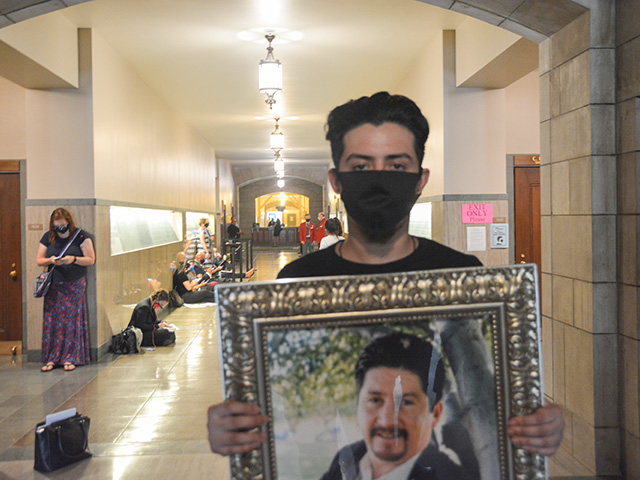