OMAHA (DTN) -- Major ag companies have made a big splash over the past month, rolling out new digital tools and tech alliances they say will help farmers improve their farm's efficiency and lower their environmental footprint.

Microsoft, Land O'Lakes, Bayer and Smithfield Foods are some of the players offering more data gathering and analyzing options to producers, potentially across tens of millions of acres. Each of their initiatives also is trying to appeal to stewardship-minded farmers.

Every one of these new programs makes the pitch to marry bottom-line field savings through improved nutrient efficiency, equipment efficiency and reducing other inputs. The initiatives say their field practices will reduce fertilizer leaching, measure and reduce greenhouse gas emissions on the farm, and improve soil carbon. The goals make the case that these new farm practices should make farmers eligible for payments in any new carbon offset markets, as well as help the companies involved meet sustainability goals.

Bayer brought together more than four years of work when it announced it was creating its own Carbon Initiative in mid-July. The company started looking at how to sequester carbon on its seed production farms, and whether that might help with corporate reporting on carbon emissions, said Jeff Seale, environmental stakeholder strategy manager and a science fellow for Bayer.

"This is such a rapidly evolving field, but at the time, when we were talking about it, there was really no good way to account for the carbon emissions on farms for that corporate reporting," Seale said.

Bayer initially partnered with several groups, including the National Corn Growers Association's Soil Health Partnership, which had received a USDA Conservation Innovation Grant to account for carbon sequestration on farmland.

"We really set out to build this framework around how do we do this, and really the focus was on corporate inventory and emissions reporting, because that was our goal," Seale said. "But very quickly, we realized there was a much larger opportunity here to allow farmers to actually participate in being compensated for these emissions reductions that happened, even if they happen only within the ag supply chain. So, from the very beginning, this has been farmer focused."

To make these carbon reports work for agriculture, they have to be based on science, transparent and ultimately become third-party validated, Seale said. So Bayer's scientists worked with others to publish a paper in the Journal for Cleaner Production on the carbon methodology and modeling the company is using.

Such efforts eventually could be boosted by legislation in the U.S. Senate through the Growing Climate Solutions Act, a bill that would create a program at USDA to set standards for carbon-sequestration markets. USDA would provide technical support for farmers and also establish third-party certification for carbon credits. Industry studies point to the prospect of a $5 billion market for carbon credits on farm ground and forests. The bill got a hearing last month and endorsement from more than 50 major agricultural groups.

Bayer's move into the carbon sequestration space is aided by its digital platform, FieldView, available from its Climate Corporation arm. Bayer said FieldView is used on more than 90 million acres globally, mostly in Brazil and the U.S. The company declined to provide a regional breakdown.

Seale said one of the challenges for a farm to get started on a project showing certified emission reductions is "there's a lot of stuff that happens in the middle, and all of that middle stuff is very expensive." Seale said one of Bayer's goals is to remove as much of the cost from the middle to make it financially worthwhile for a farmer to participate in whatever market evolves for agricultural carbon credits.

To limit the effects of global warming to 1.5 Celsius, the United Nations Intergovernmental Panel on Climate Change warned that overall net emissions need to come down to zero by midcentury. The IPCC stated limiting temperature rise to 1.5 C, compared to 2 C, would reduce temperature extremes globally as the century progresses and provide a greater opportunity to manage climate risks.

Bayer officials said its carbon initiative will start with about 1,200 farmers in the U.S. and Brazil. Bayer has a goal to reduce greenhouse gas emissions from the field by 30% in 2030.

Microsoft took a big foray into the agricultural landscape when the company announced earlier this month it is partnering with one of the country's largest cooperatives. Microsoft and Land O'Lakes are creating a digital platform for farmers to help with precision agriculture, improve soil heath and also champion expansion of rural broadband. Land O'Lakes platform will be built using Microsoft's cloud business, Azure, which is touted as using artificial intelligence to "rapidly process data and generate new insights" for users. Azure essentially takes different sets of data and fuses them together.

Land O'Lakes will tie in Azure's cloud technology with multiple farm apps and tools under Land O'Lakes' divisions, including the Truterra Insights Engine, Data Silo and WinField United's R7 tools. At least some of these products were built out from the merger between WinField and United Suppliers, which then became part of Land O'Lakes in 2015.

Truterra is already working with farmers producing for Campbell's Soup, Cargill and Nestle Purina and is connected to about 2 million acres through those partnerships. Campbell's Soup reported in July that farmers producing wheat for the company had signed up 70,000 acres to use Truterra as a tool to optimize fertilizer usage. Campbell's stated it was a year ahead of schedule in sourcing 50% of its flour "from acres enrolled in a sustainable agriculture program." Truterra will continue helping Campbell's track the environmental footprint of its commodities.

Jason Weller, vice president of Truterra, said Land O'Lakes stood out for Microsoft as a partner because the cooperative is farmer-owned, and thus its farm tools are focused first on benefiting farmers. Microsoft came into the partnership wanting to expand industry technology while offering a way to scale up climate-smart agricultural practices, Weller said.

"Microsoft could have worked with anyone in the industry, and in the end, they did their due diligence," Weller said, pointing out that as a cooperative, Land O'Lakes focuses on creating value for its farmer owners. "This is, I think, a very strategic direction for Microsoft, as well as for Land O'Lakes."

Land O'Lakes stated its network of farmer cooperatives connect with 150 million acres and the cooperative processes and sells food products coming from about 300,000 farmers. The pitch from Land O'Lakes is the various data sets will help farmers mitigate potential crop stresses earlier and recommend more precise actions to take in the field. Like Bayer, the Land O'Lakes/Microsoft collaboration stated their tools will help maximize yields, optimize inputs and lower the farm's carbon footprint.

Highlighting the ability for farmers to sequester carbon, Land O'Lakes stated it and Microsoft are working to develop a digital product through the Truterra tool that would help farmers build a baseline for their agronomic and conservation practices, ideally to eventually generate carbon credits.

Microsoft began 2020 announcing the company wanted to be "carbon negative" by 2030 and remove carbon from the air. To make that happen, the software giant is aligning with several other companies, and agriculture is one of the few industries that can actually sequester carbon. Just in the last week, Microsoft began announcing initial investments for its $1 billion Climate Innovation Fund.

To help their agricultural digital aspirations, Land O'Lakes and Microsoft are pushing for more policy changes to boost broadband in rural communities, including better mapping to spotlight the dead spots. The companies said they plan to help offer free public wi-fi at more than 150 Land O'Lakes facilities in 19 states as well.

The tech alliances forming to measure agriculture's environmental footprint include Smithfield Foods. The vertically integrated pork processor announced in late June that it would partner with Granular, part of Corteva Agriscience, to work with grain farmers in North Carolina, Ohio, South Carolina and Virginia. Granular Insights tools are designed to help farmers with in-field pest management decisions and other problems that would lower crop yield.

The partnership basically provides discounted rates to farmers who sell grain to Smithfield to enroll in Granular's Insights with Directed Scouting. The tool provides high-frequency imaging of fields to farmers that can alert them about potential crop problems.

"It's a great way to introduce growers to a digital tool that provides more management to their fields and ties that into more efficiency and more sustainable practices," said Julie DiNatalie, senior director of external affairs for Corteva. "A lot of growers haven't used tools like this before, so it's a nice stepping stone to bring digital tools forward into the farmer's toolbox."

Smithfield said part of the goal of the agreement with Granular is to help reduce Smithfield's greenhouse-gas emissions in its supply chain 25% by 2025. Granular will help reduce environmental impacts while improving fertilizer usage and crop production, the companies stated in a news release.

Another aspect of broader data tools is the potential to see possible warning signs ahead, said Matt Hudson, co-director of the Center for Digital Agriculture at the University of Illinois.

Leading up to the COVID-19 pandemic, processors and consumers were increasingly wanting more identity preservation for crops, which requires traceability tools and verification. The pandemic also showed how the food chain can be disrupted. Hudson said widespread use of these new farm technologies can provide the production and processing industries more early warning of supply problems.

"The COVID thing in particular has brought home that the food chain isn't something we can just forget about," Hudson said. "It's easily disrupted. We don't always get early warning of these disruptions. They can still be a problem. And so, whether you're a commercial organization or government, it's good to know what's going on, before those harvest numbers are in and you realize that harvest is bad, right? The earlier you can find out you've got a problem in a crop and start taking preventive measures. So, whatever it is, there's actions you can take to prevent shortages, if it can get early warning of a problem in crop growth or in supply chains." 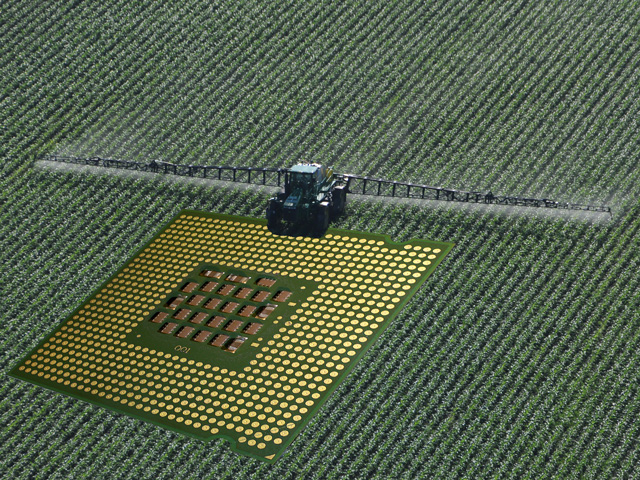