OMAHA (DTN) -- Spending a day at your state fair looking through the pens of livestock and eating your favorite fair food doesn't appear to be in the cards this summer for many. Several states across the country have cancelled their traditional state fairs due to the COVID-19 pandemic.

The same applies to large farm shows and expos. As the dates of future events approach, it is likely many more ag-related events will be canceled or postponed.

Sixteen states have already canceled their state fairs, according to research done by DTN this week. Midwest states skipping their fairs this year include Illinois, Indiana, Iowa, Minnesota, North Dakota, Ohio and Wisconsin.

"This is the right choice based on guidance from the Illinois Department of Public Health and other experts; we have to prioritize keeping our people safe," Pritzker said in a news release. "Our state fairs are unmatched across the nation, and I look forward to gathering again to showcase the best of Illinois when it is safe to do so."

On Wednesday, June 10, the Iowa State Fair Board announced the cancellation of the 2020 Iowa State Fair due to the COVID-19 pandemic. The decision was a difficult one, according to a news release on the fair's website.

"The Iowa State Fair's top priority is protecting the health and safety of fairgoers, staff, volunteers, exhibitors and entertainers," the release said.

"Amid the pandemic, we couldn't, in good conscience, put on the fair when we knew access to emergency safety services at the fair could be limited, public transportation to and from the fair would not be possible, the constant sanitization of a seemingly infinite amount of high touch surfaces lacked feasibility and social distancing in lines to get your favorite fair food or walking the Grand Concourse would be difficult."

While the Iowa State Fair Board couldn't predict what the pandemic would look like in August, they did try to make educated decisions based on the situation today. Waiting any longer to decide if the fair would occur would have been "potentially damaging" to fair partners and planning, the release said.

"The best thing we can all do right now is to help the world recover and heal," Hammer said. "In the meantime, your team of state fair pros is working hard to come back bigger, better, stronger and smarter in '21."

"Unfortunately, key elements including vendors and partners of the Fair began falling off and so we pivoted, and found a way to still serve our communities," Brad Chambers, Indiana State Fair Commission Chairman, said in release.

While 16 states have already canceled state fairs, that number will most likely rise as other states decide the fates of their fairs as start dates get closer. Messages on many state fair websites state the organization or state governments are monitoring the situation and will make decisions in the near future.

The Kansas State Fair had a statement posted to their website on June 10 saying the fair is still scheduled to take place on Sept. 11-20 in Hutchinson.

"Our team remains confident that we will have a Fair in September -- an event that has spanned 107 uninterrupted years," Robin Jennison, Kansas State Fair General Manager, said in a statement.

While the fair is still a go for now, there are safety measures the fair is considering. Among them are one-way routes through buildings, encouraging customers to buy tickets online or at Dillons Food Stores and more hand sanitizer stations around the grounds.

Farmfest, held in Redwood County, Minnesota, for 38 years was set to happened Aug. 4-6. Dakotafest, scheduled for Aug. 18-20 in Mitchell, South Dakota, was to celebrate its 25th anniversary in 2020.

"We announce this decision with great disappointment but the well-being of our exhibitors, attendees, staff, volunteers and their families is paramount," Zippy Duvall, AFBF President said in a statement.

The DTN Ag Summit, set for Dec. 7-9 in Chicago, is currently scheduled as an in-person event. Details on speakers and topics, and updates on the event in general, will soon be available at https://www.dtn.com/… .

Here is a list of ag-related events canceled or delayed because of the COVID-19 pandemic: 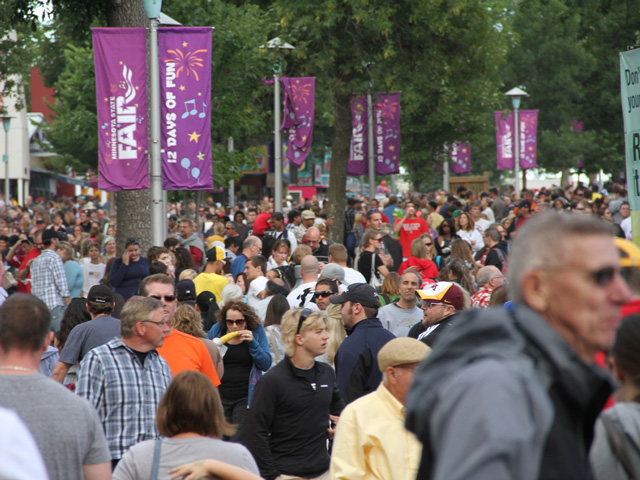