GLENWOOD, Iowa (DTN) -- Julie Borlaug admits some apprehension about the documentary premiering next week on public television stations about her grandfather's place in history as the father of the "Green Revolution."

"I understand it's pretty negative and a lot of people are pretty concerned about it," said Julie Borlaug, who has worked heavily to carry on her grandfather's legacy and is a vice president for a crop genetics company.

While most in agriculture understand what Norman Borlaug did to fight global hunger, his work and legacy fade with history. A documentary on the Nobel Peace Prize winning wheat breeder will examine Borlaug's work and the role of the Green Revolution in the Cold War. The PBS show "American Experience" on April 21 will premiere "The Man Who Tried to Feed the World," offering more perspective on Borlaug's life and work to boost global food production.

When Borlaug died in 2009 at the age of 95, obituaries stated his work helped save hundreds of millions -- if not billions -- of lives. Yet, in the 50 years since Norman Borlaug was awarded the Peace Prize for his work tackling global hunger, nearly every criticism of modern production agriculture gets laid at his feet. One commenter in the documentary even chastises the 1970 Nobel Prize committee for honoring Borlaug's work.

Rob Rapley, who directed and wrote the film, drew Borlaug as a man raised largely in poverty on a rural Iowa farm whose life's passion was driven by witnessing hunger and famine. As the documentary highlights, Borlaug's own point of view on his work remained constant, but the global politics around hunger evolved throughout the 20th century.

"For him, it's always a humanitarian effort to relieve hunger and of course that's the immediate effect," Rapley told DTN in an interview. "Once it gets out to the wider world, the people who were above his pay grade were always working towards an environment and trying to adapt to different circumstances. The implications of the program -- his work -- change over time as the geopolitical situation evolves."

The heart of Borlaug's work began as World War II raged in the early 1940s. The U.S government was concerned about social unrest among Mexican peasant farmers and the possibility that it might affect the southern border. The influential Rockefeller Foundation hired Borlaug to join a team working on strategies to help boost the production of Mexican crops.

"I don't think my grandfather, when he was chosen to go down to Mexico, really understood why the U.S. government was so interested in making sure Mexico did not turn leftist," Julie Borlaug said. "I don't think any of that was on my grandfather's radar. That was all playing out on a higher level than him."

Instead of working on maize, Borlaug drew the side project in Mexico working on wheat. As biographer Charles Mann noted, Borlaug became haunted by the malnutrition he saw in Mexico. From that, he found his life's work "and snapped into focus."

With little help from his superiors, Borlaug not only developed a wheat variety resistant to stem rust, but he also later developed a dwarf variety that limited stems snapping from large wheat heads.

Just as Borlaug's work began to take off, China fell to communism, leading to a foreign policy panic in Washington, D.C. An outgrowth of the U.S. response to communism was the idea that people who have enough to eat don't become communists. The Rockefeller Foundation and the State Department began to view Borlaug's work as a way to feed a hungry world. They began to pump money and resources into Borlaug's wheat operation in Mexico.

That foreign policy theme of food and agricultural aid as a tool to fight communism would carry with Borlaug's work for the next two decades. In 1963, Borlaug tackled a bigger challenge when he was invited to India, a country that struggled with chronic malnutrition. Mankombu Sambasivan "M.S." Swaminathan, an Indian plant scientist, invited Borlaug to see what he could do. The two became partners in the fight against hunger. "We had the same ideas and the same goals in life, and I liked his approach," said Swaminathan, who himself has gained widespread acclaim for his work on food production in India, and was the first World Food Prize laureate in 1987.

While eventually heralded for his work to curb famine in India, Borlaug often cautioned the food production gains from the Green Revolution only bought time. He remained worried that human population growth would overwhelm the planet's resources.

"He was always, always talking about the population monster," Rapley said. "It was really kind of his mantra. He always maintained he had not solved the problem. 'I bought us time to deal with this larger problem.' "

Global population has doubled in the 50 years since Borlaug became a Nobel Peace Prize laureate. Critics of large-scale agriculture point to Borlaug, but the development of global agricultural policy was largely out of Borlaug's hands.

"People, I've found, tend to personify everything and lay it all at Norman Borlaug's doorstep," Rapley said. "He played this fascinating and crucial role from 1940 to 1970 or so, but after that he was no longer really leading the charge anymore."

Working on the documentary, one most remarkable features about Borlaug's character was "his focus, determination and work ethic," Rapley said. There's also a misconception among at least some of Borlaug's detractors. "A lot of people implied Norman Borlaug enriched himself -- that there was so much money in this -- and I found absolutely no evidence of that," Rapley said. "He never got rich. There's just no plausible evidence. He could have become an incredibly wealthy man, and quite easily. It's not hard to think about how that would have happened. He absolutely sincerely 100% believed in the cause, and he did so until the end of his life."

As one commentator mentioned, Borlaug was like a spotlight, but cast a deep shadow. That remains true today. His early workplace in Mexico is now the International Maize and Wheat Improvement Center (CIMMYT), part of a larger global network of crop research institutions. Texas A&M maintains the Borlaug Institute that focuses on international partnerships with crop scientists in developing countries. USDA has the Borlaug Fellowship Program to bring in scientists to learn from U.S. researchers. And Des Moines, Iowa, is home of the World Food Prize, an international award honoring those who work to alleviate hunger, and the anchor of the Borlaug Dialogues, an annual symposium that centers around work to reduce hunger and advocates for farmers globally. A statue of Borlaug also now stands in the U.S. Capitol.

The documentary more than once mentions Borlaug's stubborn nature. Rapley said at times Borlaug could be blind to the wider implications of technology, such as his strong advocacy for DDT despite the record of health claims against the insecticide that led to its eventual ban. Still, Rapley said Borlaug's critics have not provided a plausible alternative to feeding everyone in the world.

"He had arguably a larger impact on the course of human history than people who were far more famous and well known," Rapley said. "He had a huge, huge, huge impact. His detractors seem intent on denying him credit for anything, but when you see the number of people who are alive and fed, it's staggering. People would do well to look more closely at him."

The American Experience, "The Man Who Tried to Feed the World," premieres on April 21 at 7 p.m. CDT on PBS. https://www.pbs.org/… 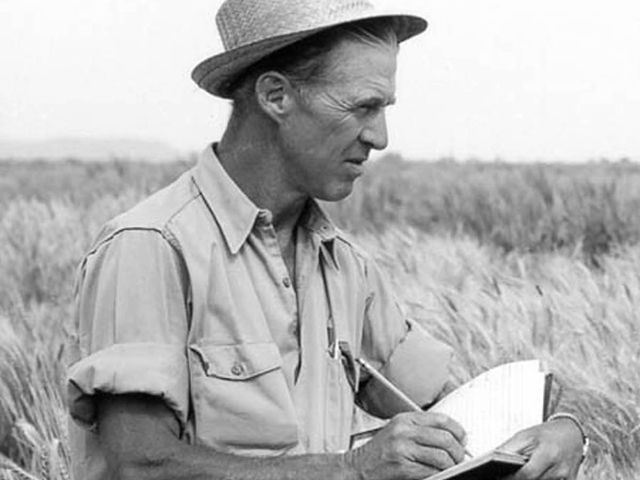