YUMA, Colo. (DTN) -- At 35, Bethleen McCall is a lot younger than your typical commodity farmer, but she's a veteran when it comes to farming hemp in Colorado.

McCall is president of the Colorado Hemp Industries Association and she credits the state's early action allowing regulated hemp production as far back as 2014 for allowing her to start farming where her family once farmed.

Last week, McCall was rushing to try to beat a late-week temperature crash and snow, but that didn't work out so well. She and her employees got about 20% of their crop harvested before the hard freeze. They have now sent away samples to see if the glands in the plant that contain cannabinoids burst during the freeze. Depending on those results, the farm may have just a few days to harvest before the rest of the CBD oil dissipates. Regardless, it's likely the freeze will bring down the pounds of production and CBD content.

Still, the plants held up better than expected in the cold and snow, she said. "We were expecting them to turn to mush; so far they have not."

McCall is a fifth-generation resident of Yuma County who saw her as grandparents and parents slowly lost the ability to farm in the 1980s. She took early jobs working at USDA's Natural Resources Conservation Service then worked for 15 years at the Yuma County Conservation District, focusing on irrigation issues. That included trying to help farmers find valuable crops that used less irrigation. McCall recalls one of the crops they studied was kenaf, a fiber crop.

McCall credits hemp for allowing her to get back into farming. And generally, McCall noted one of the differences between hemp growers and other crop farmers on the front range of Colorado is age. Most hemp farmers in her area are 40 years old or younger. "A lot of people in my generation are the ones starting this and getting into it," she said.

After the 2014 farm bill opened up hemp production to states willing to test the prospects, McCall and her partner, Mike Sullivan, each were looking at developing a greenhouse operation when they teamed up and built the farm together.

"The CBD market took off, and I was able to leave my job and farm full-time now," McCall said. "You don't have the opportunity to be on the ground floor of a new business too often."

Yuma County in eastern Colorado has 17 hemp farms and production has exploded statewide to more than 80,000 acres this year. The 2018 farm bill removed hemp as a controlled substance to allow production nationally.

The new "deregulatory" environment has created more problems for established growers such as McCall, likely because more people have learned about hemp this year than ever before. That's actually led to more scrutiny over the business, McCall said.

"This year has been a lot harder than in years past," McCall said. "You have to tell that to people all the time, I am legal. I have more permits and licenses than anyone else."

"I understand being under a higher level of scrutiny but at some point you can grow hemp like you grow corn and this has got to change," she said.

HOW IT PENCILS OUT

Still, hemp right now is worth the regulatory headaches, even with higher production lowering the value of the crop this year. Hemp grown for cannabidiol (CBD) in Colorado has lost more than one-quarter of its value since last year but still averages more than $50,000 per acre. The math breaks down like this: An acre, on average, will produce roughly 1,740 pounds of plants, but the dried flower weight breaks about 3/4 a pound, or about 1,305 pounds. CBD is on average about 10% of the biomass. CBD is now valued at about $3.90 per point (it averaged $5 per point last year). At a 10% average, that equals $39 a pound. Total pounds of 1,305 X $39 = $50,895 per acre.

The per-acre value climbs with higher-quality hemp that can produce more CBD oil. McCall noted some better plant varieties can produce 15% CBD oil, and the best varieties are often grown indoors to avoid pollination and can hit about 18%.

While the farm bill opened up the potential for hemp production nationally, it still requires USDA rules that the Trump administration right now has not completed. The interim final rule for USDA's hemp production program has been at the White House Office of Management and Budget since June 27, the longest of any current USDA regulatory action under review at the White House. The department had intended to have its rules out sometime in August. https://www.reginfo.gov/…

Farmers in some states have to wait until USDA is done with its rules before they can test the market. Iowa is among a dozen states that enacted legislation to allow hemp but did not get crops planted in 2019. Iowa officials are waiting until USDA approves its plan for regulating hemp before allowing production, but USDA will not approve state plans until its regulations are finalized. An official with the Iowa Department of Agriculture & Land Stewardship noted THC-testing protocol remains in limbo right now, and Iowa is waiting to see if USDA specifies how testing must be done.

Other states just started to dabble with hemp production this year. Bill Achord, who heads the Nebraska Hemp Association, noted the state only approved 10 growing licenses for 2019 even though 176 farmers applied. New regulations are expected in Nebraska to open up the state to more production in 2020, Achord said.

Nationally, hemp acreage was projected at 511,442 acres with 16,877 grower licenses across 34 states by the "U.S. Hemp Report," put together by an organization Vote Hemp. But Vote Hemp also states less than half the licensed acreage, around 230,000 acres, is actually planted. Then roughly half of that will be lost or determined as noncompliant, so about 115,000 to 138,000 acres will be harvested. Vote Hemp surveys state departments of agriculture annually on hemp acreage. https://www.votehemp.com/…

As an emerging industry, hemp is a little bit of the Wild West, including seed sales. A Kentucky company, Elemental Processing, just last month sued an Oregon company, HP Farms, for $44 million for selling 6.4 million seeds that were supposed to be female with a high germination rate. Elemental Processing distributed the seed to farmers, but reported that as much as 70% of the seeds were male. The Kentucky crop was destroyed to avoid pollinating other area hemp crops.

Strong growth is expected to continue in the CBD market for the next five years, at least, according to the Colorado firm BDS Analytics. It forecasts CBD sales, which were $1.9 billion in 2018, will grow to $20 billion by 2024. The group noted, though, that growth of the CBD market will depend heavily on how FDA decides to regulate CBD in areas such as food and beverages.

With so much focus on hemp right now, McCall said she remains worried about how the FDA will look at CBD products in years to come.

The big regulatory fear remains just how USDA oversees the chemicals that separate hemp from its close cousin, marijuana. Under the farm bill, hemp is allowed to have, on a dry weight basis, 0.3% of Delta-9 tetrahydricannabinal (THC), the chemical that produces intoxication in marijuana. In comparison, marijuana grown and sold legally in Colorado may have a THC content somewhere around 18% to 20%. It's a challenge to keep a hemp crop from going above that 0.3% level at harvest.

Sunny Summers, cannabis policy coordinator at the Oregon Department of Agriculture, said the problem can come down to testing the right form of THC. The farm bill limits Delta-9 THC, but there are other forms of THC in cannabis plants that can be converted to Delta-9 when the plant is heated. Some types of lab equipment used for testing can change the number during testing itself, Summers said. Oregon uses a cold-testing method that can highlight Delta-9 without generating higher levels of other forms of THC.

"There is a lot going on there about the type of THC we're talking about and when do you sample the plants," Summers said.

Oregon, like Colorado, jumped into the business early and has more than 1,900 farmers growing about 63,000 acres this year.

While the program rules are not complete, USDA is planning to offer a hemp policy in 2020 as part of Whole-Farm Revenue Protection policies. The plan will come with at least two caveats: hemp with THC above the compliance level will not be covered as a loss and hemp will not qualify for replanting payments.

States have different sampling dates. Oregon tests 28 days prior to harvest. Kentucky tests two weeks prior to harvest, while Colorado samples in a 10-day window around harvest. Some states require testing every field, every year while others do random sampling.

"Those are all contributing factors why transporting from one state to another is difficult," Summers said. "Plus, if you are drying the plant that will reduce moisture content, so what tested legal in the field will have a completely different value if you test it after it's dried."

Interstate transportation remains a huge concern, McCall noted. Truckers hauling hemp can find themselves spending several nights in jail while state and local officials try to sort out the legality of hemp. States without legal hemp, such as Idaho and South Dakota have had cases this year of truckers arrested for hauling hemp through their states. Yet, McCall said, "Under the farm bill, if you are approved through your state program, you have been cleared. Too many people don't understand that yet."

Pollen drift also is a challenge. Producers try to control and limit seeds in the field and destroy male plants, but McCall notes that hemp pollen on the Front Range can drift for several miles. So if one farmer isn't controlling their male plants, it can cause problems for other producers in the area. Growers are trying to coordinate to ensure they grow only feminized seed or clones from female plants to avoid pollination. "We know it's going to happen, it's just a matter of time," McCall said. 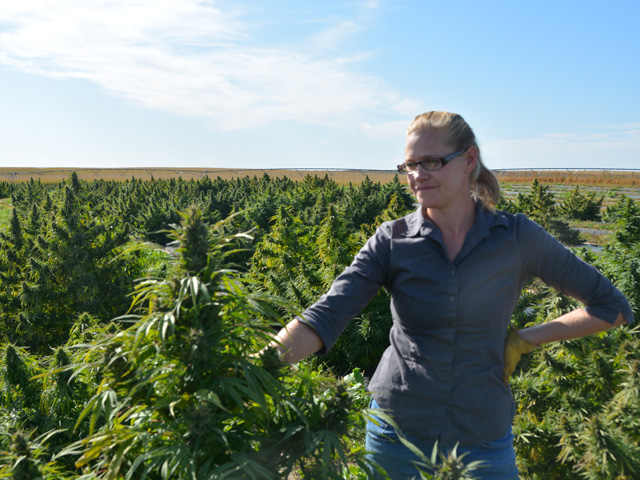