OMAHA (DTN) -- Ranchers in the Nebraska Sandhills have struggled to put up hay because of too much moisture. As a result, many in the region are faced with either buying feed or culling their cow numbers to try to trim feed costs, according to those familiar with the situation.

This is the latest production-related issue Nebraska ranchers have faced following a wet 2018 and severe-weather-related challenges so far in 2019.

The Nebraska Sandhills is a unique region of mixed-grass prairie on grass-stabilized sand dunes in the north-central part of the state, making up about a quarter of the state. The Sandhills sit atop the Ogallala Aquifer, which provides a natural water source for both the grass and livestock.

The main source of hay for many ranchers comes from sub-irrigated meadows between the dunes where groundwater is close to the surface. The constant supply of water allows these meadows to yield abundant forages during the growing season. However, during times of too much moisture, these meadows are often underwater and ranchers are not able to bale them.

Jay Jenkins, a University of Nebraska-Lincoln (UNL) Extension educator located in the northern Sandhills in Cherry County, told DTN it has just been too wet to put up hay in these lower areas.

"It's like a bowl -- there just is nowhere for the moisture to go," Jenkins said.

The Nebraska Sandhills has seen nearly double the amount of precipitation this year, according to DTN Senior Ag Meteorologist Mike Palmerino.

And the situation doesn't appear to be changing anytime soon, he said.

"December to February are the driest months, with normal precipitation amounts of a little over an inch," Palmerino said. "I would think that there is the possibility of at least doubling that 1-inch amount this winter."

The situation in the Sandhills region actually began last growing season, Jenkins said. Some ranchers couldn't put up hay in their sub-irrigated meadows then because it was just too damp.

The increased moisture continued into this growing season, he said. The region saw severe winter weather during the spring calving season, and nearly the entire state saw the effects of the "bomb cyclone" in mid-March.

All the rain has caused severe flooding in the area. Several times this summer, U.S. Highway 83 was closed because of flooding.

Frank Beel, who ranches with his family near Johnstown in both Cherry County and neighboring Brown County, said the area has flooded three times this year alone. The first time was in March, then again in May and September.

"We were pretty dry in mid-August, but the rains came back in September," Beel said. "We had areas get anywhere from 6 to 10 inches in middle of the month."

Jenkins said that, as a result, many ranchers tried to graze these meadows, as they couldn't get in with hay equipment. Some also attempted to put up hay on the hills. The continuous rains didn't make either situation ideal, as cattle couldn't graze grass under water, and putting up hay in the hills was often not possible.

Ranchers in the region are still attempting to put up hay several months after when it's normally ideal to bale it. At this point, they might get some hay, but the quality is going to be lacking, Jenkins said.

Beel said he has seen some decrease in hay production this growing season. He estimated his meadows in Brown County should yield just slightly less than normal thanks to the cooperative topography. However, his hay ground in Cherry County might yield only about half the number of round bales he normally harvests.

The good news for Beel is, thanks to some hay carryover from last year and some forage grown under center pivot irrigation, he should have enough feed for the cow herd this winter. But other ranchers in his region are not as fortunate, he said.

Farther to the southwest, Casey Cooksley said hay production is expected to be lower. The Broken Bow rancher puts up mainly alfalfa hay. He said both tonnage and quality will be down this year because of the excessive amount of moisture.

"First and second cuttings both got rained on pretty regularly," Cooksley said. "We are still on the third cutting, and usually we would have been done weeks ago."

All of the extra moisture is forcing adjustments in herd management for Sandhills ranchers. They are faced with the questions: Do I keep cows number the same and purchase hay/supplemental feed, or do I aggressively cull to avoid high feeding costs?

Jenkins said many local ranchers are planning on doing both, almost the same type of decisions they would face in a drought situation. He said he talked to a rancher recently who was going to buy millet hay for the first time in his ranching career.

Others who don't want to buy hay have decided to cull cows. While there could be some hay in the area, the quality will be lower, requiring the purchase of more supplemental feed, Jenkins said.

"One of the local sale barns around here stopped taking consignments for an upcoming sale because they were already full," Jenkins said.

Beel said when he took some bred cattle to his local sale barn back in June, cattle numbers heading to town were fairly high at that time. Many ranchers were anticipating the lack of hay even then, he said.

Cooksley said his local sale barn was expecting more cull cows this fall not only due to the lack of feed but also because of poor breeding percentage. That's a direct result of tough winter weather and the bomb cyclone, he said.

"Cows have been through hell since Mid-March, and they still haven't recovered," he said.

What could help Nebraska ranchers this winter would be fairly open weather that would lessen feed needs somewhat.

Beel said he normally weans spring calves and runs calves and cows separately on his meadows. That probably won't happen this fall, he said.

"We will have adjust and run more on upland pastures," Beel said. 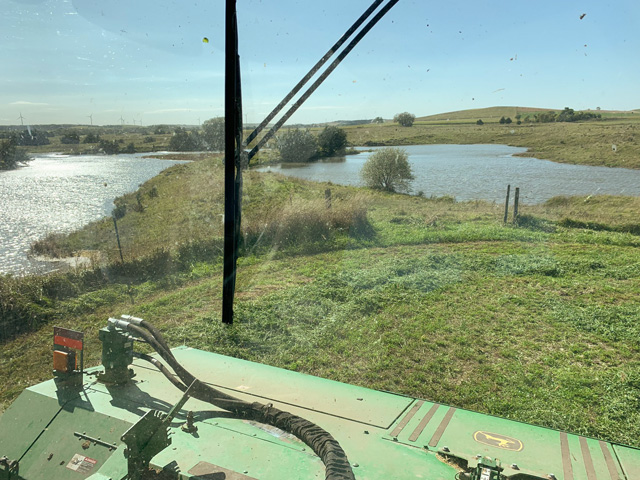