LEXINGTON, Ky. (DTN) -- Kentucky political and agricultural leaders this week spent a lot of time and energy to recognize the early success of the hemp industry in the state.

The promotion of hemp even reached the U.S. Senate floor with the passage of a resolution designating June 4-10 as "Hemp History Week." Kentucky officials will hold events Saturday to recognize Hemp History Week. The Senate resolution cited imported hemp is valued at $76 million annually while products made from hemp -- of which there are more than 25,000 -- are valued at more than $820 million.

"Since Kentucky's earliest days, industrial hemp has played a foundational role in our agricultural history and economy," McConnell said. "With our Hemp Farming Act of 2018, I believe that hemp can also be an important part of our future."

Talk to most Kentuckians who know about hemp and they will inevitably highlight Kentucky's hemp production right on up through World War II and how hemp grown during the war was used for a variety of military ropes and other fiber-based military products.

McConnell's bill would fully legalize hemp production in the U.S. It would remove the hemp plant from being a Schedule 1 drug under the Drug Enforcement Agency and allow USDA to oversee hemp production much like the department does for any other crop. Giving USDA some jurisdiction over the crop would allow for the possibility of farmers to buy crop insurance, for instance, or offer other forms of assistance available to specialty crop growers.

"That's the main thing that McConnell's bill will help with is opening up hemp to mainstream -- researchers, investors, crop insurance," said Cynthiana, Kentucky, farmer Brian Furnish, one of the earliest advocates for re-establishing hemp in Kentucky. "Right now, we can't get offered crop insurance or any USDA programs. It's critical that you have a majority leader that this is his No. 1 ag issue. And he sees the benefits of it."

Joseph Sisk, who farms near Hopkinsville, Kentucky, said hemp farmers such as himself operate in a kind of "Neverland," but McConnell's bill would also make it easier for hemp farmers and processing businesses to buy property and casualty insurance for their operations. Sisk said that it has been nearly impossible to insure inventory on the farm. "They won't insure the inventory because, from a federal standpoint, they are confused about how to handle it," Sisk said.

Several provisions from McConnell's bill were added this week to the Senate Agriculture Committee's initial draft for the 2018 farm bill that will be considered next week in committee.

Kentucky ag leaders have been at the forefront of chipping away at federal resistance to hemp farming. Furnish started working in 2012 with Rep. James Comer, R-Ky., who was then the state's agriculture director, to champion hemp as an alternative crop for tobacco farmers.

"We had been talking for years about how we were going to diversify away from tobacco," said Furnish, who became the first chairman of the Kentucky Hemp Commission and now is president of the U.S. Hemp Roundtable to promote hemp production nationally.

Sisk began farming the crop in 2016 after his first conversations with a processor in the fall of 2015. He went to Colorado to see how farmers there produced it, but he and others recognized not everything translates the same because of different growing conditions. Sisk has tinkered with plant populations each year. His first year, Sisk said, 1,250 plants per acre proved too thin, but the plants grew too big. So Sisk doubled the planting population in the second year and will plant 3,000 plants this year.

Farmers aren't allowed to use pesticides on hemp, but they are also experimenting with different fertilizer levels as well. Sisk said farmers are using anywhere from 125 pounds of nitrogen per acre to as much as 200 pounds. Initially, people were suggesting hemp could grow in almost any environment, but Sisk said hemp is similar to any other cash crop.

"The better the ground makes better hemp like any other crop in the world," Sisk said. "Farmers as a whole in this state have been fantastic about sharing information with each other."

Thanks to McConnell, hemp became a national pilot project crop in the 2014 farm bill, allowing hemp to be grown under the oversight of a state agency or university research program. One major difference between hemp and marijuana is the level of tetrahydrocannabinol (THC), the compound that provides the "high." Marijuana sold in Colorado may have an average THC level of 20%, while hemp production under the 2014 farm bill is only allowed 0.3% THC content for the harvested crop.

Outside of its more potent cannabis cousin, hemp is nearly as diverse a plant as corn. Different varieties of hemp are raised for healing oils, fiber or food products. The final processing product determines the variety of plant grown and whether it demands more hand labor or mechanical production. A great deal of the hemp being grown in Kentucky is being grown for a booming cannabidiol (CBD) market.

CBD oil is touted for an array of health benefits, but sellers technically cannot make health claims under the Food and Drug Administration. The oil, sold as drops, gelcaps or salve gel, is sold in health stores and pharmacies nationally, as well as online.

"We know it helps people feel better and sleep better, and it's used for all kinds of different issues," Furnish said.

Early on, there were a lot of people also showing up in Kentucky looking to start a CBD oil-processing operation. Sisk compared it to a boomtown mentality, but the Kentucky Department of Agriculture also stepped in to help ensure farmers were not signing up with some questionable speculators. Sisk credited the department for the way it has regulated the initial development of the industry.

"The department made sure it didn't get out of hand or become a circus," Sisk said. "They controlled it very tightly, but they facilitated it. It's been one of my best interactions with a government entity. They want it to be awesomely successful, but they have kept tight control over it."

Touting the success of the crop, Kentucky officials reported 3,271 acres were grown in 2017, and they expect the acreage will expand this year. Farmers made about $7.5 million off the crop in the state last year, while more than $25.6 million was invested in more capital to continue growing the industry.

Furnish farms in a partnership for an Australian company called Ecofibre and sells CBD oil under the "Ananda" brand. He and his brothers grow about 400 acres of hemp, of which 300 will be tied to Ecofibre. Another 100 acres will be contracted elsewhere, Furnish said.

Once the 2014 farm bill passed, Furnish said, he started getting phone calls that haven't stopped. "People all over the world started calling me wanting to get into hemp," he said. Furnish later added, "as long as they are farmers, I talk to them."

At least 42 states now will allow some form of hemp cultivation, including Arizona, Kansas, Missouri, New Mexico and Oklahoma, all of which adopted new laws in the last few months. States that have yet to enact any law include Connecticut, Georgia, Idaho, Iowa, Louisiana, Mississippi, New Jersey, Ohio and Texas, although at least some of those states have bills or state referendums for hemp production.

Parts of McConnell's new bill may be less needed after the federal Drug Enforcement Agency in May released a memo citing that products and materials made from cannabis that fall outside the definition of marijuana can be sold without restriction nationally. The DEA's decision, which comes 14 years after a federal court ruling against the agency in the same vein, will broaden the ability of various cannabis products that can be produced as well as imported or exported.

Still, Kentucky farmers might have an edge in growing hemp over producers in other states because they grow it for the CBD oil in much the same way Kentucky farmers have grown burley tobacco for generations. They will take bedded plants from a greenhouse and plant them, then cut and hang mature plants in barns.

"We actually grow our hemp the exact same way," said Furnish, an eighth-generation tobacco farmer. "Not everybody grows that way, but that's how we do it."

Furnish has noted that he has netted $2,000 an acre off his crop, but he adds that growing hemp for oil production requires a lot of labor costs. Producers often use the same labor that works in the tobacco fields to handle the hemp crop. Because of the various uses for food, fiber and oil, Furnish sees hemp splitting off into different varieties for various regions of the country based on the type of production. A grains or hay farmer for instance, might dabble more in hemp varieties grown for fiber because that can be harvested with equipment similar to a silage chopper.

"I think the fiber and the food will go out west to the bigger grain areas where they are not used to crops that are labor intensive, and we'll do more of the buds and the flowers here for the cannabinoids," Furnish said.

Sisk, like Furnish, farms at some scale, but he has enjoyed the learning experience of working with hemp and the fledgling industry.

"It's evolved real quickly into a better farming model for the producers," Sisk said. "It's a great little industry. It's going to continue to become more important. It just has to be delisted." 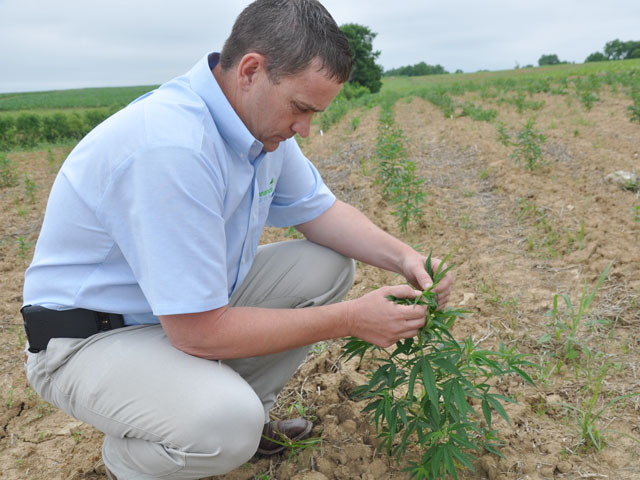