OMAHA (DTN) -- A spring blizzard with high winds and moderate-to-heavy snow blasted much of South Dakota late last week and this past weekend, killing some livestock and sending a number of cattle producers scrambling to protect their cows and young calves.

Initial reports from across the state indicate there were some scattered livestock deaths attributed to the storm. However, many farmers and ranchers are still digging out, so the total number of cattle losses may not be fully known until the snow melts.

The storm began as a strong low-pressure system that brought precipitation in the form of rain and even a few thunderstorms, which changed over to snow on April 13, according to the National Weather Service in Rapid City, South Dakota. Heavy snow was reported across much of western and south-central South Dakota with gusty northerly winds resulting in blizzard conditions from the blowing snow. Snow amounts varied across the state from 2.5 inches in Fall River County to 20 inches of snow in Winner in Tripp County.

Taylor Grussing, South Dakota State University Extension cow/calf field specialist located at the Mitchell Regional Extension Center in Mitchell, told DTN she has visited with a few ranchers from across the state since the end of the blizzard, and there were some reports of lost calves. Young calves, as well as the cows that calved during the blizzard, were at most risk, she said.

Grussing said some ranchers reported to her they didn't lose any calves, while others said they lost as many as 30 calves. The losses were largely dependent upon the age of the calves and where they were located during the blizzard. Calves two weeks old and older seemed to fare pretty well, she said.

"With some cattlemen still digging out from 7-foot-high drifts, the effects of the blizzard may not be known for a while," Grussing said.

What appears to have prevented greater livestock losses was that many cattlemen seem to have heeded the warning of a possible blizzard and took steps to protect their cattle.

Grussing said producers were good about adding wind protection and moving cattle to better-protected areas. However, the 50 mph winds made it difficult for cattlemen to get to newborn calves when they couldn't see very far and were constantly getting stuck in the snow, she said.

Jay Culver, a farmer/agronomist from Iroquois, said he knew the storm was coming and moved his cows that were close to calving into his farm yard. This made it fairly simple to move new calves inside out of the nasty elements on his east-central South Dakota farm.

"Luckily, we only had three cows calve during the storm, which was a blessing," Culver told DTN.

Culver speculated that heavy livestock losses may have happened farther west where there were greater snow amounts.

Todd Boesen, a farmer/rancher from Kimball in the south-central part of the state, said he fared "rather well" during the blizzard, losing only one calf during the storm.

"I have heard some horror stories, but no confirmations," Boesen said.

Even before the blizzard last weekend, spring calving has been a bit of challenge this year, Boesen said. He cited the wet, muddy conditions as a major obstacle many cow/calf producers had to deal with this spring.

Not everyone in South Dakota even saw the storm.

Andy Weiser, a farmer/rancher from Roscoe in the north-central part of the state, said the storm shifted farther to the south and didn't hit his area. He is about half done calving this spring, he said.

"We were actually very lucky and missed the storm," said Weiser. He said he hasn't heard anything about cattle deaths from the storm.

For him, the snow was not the challenging issue this spring -- it's been the cold weather. Winds that blow from the east or south are bad news for his cattle, as he has very little wind protection in that direction on his farm, he said.

Weiser said that, in order to combat the wind, he has been busy in the days after the storm spreading fresh bedding to keep his cattle content. "If you can get the chill out of them within the first 24 hours, they will be fine," he said.

Weiser and other South Dakota farmers likely will have to put up with cooler weather for a few more weeks, said DTN Senior Ag Meteorologist Bryce Anderson.

Anderson said the forecast for South Dakota going forward is for a slow turn toward more seasonal conditions through the end of the month and into early May. Precipitation will most likely let up some, but lower-than-normal temperatures could stick around into May, he said.

"There is still going to be a fair amount of colder air to deal with out of the Canadian Prairies, and that leads to temperatures trending below normal over not only South Dakota, but much of the central U.S.," Anderson said.

Though the winter storm has passed, it could have some lasting effects on young calves, Grussing said.

Producers will need to watch their calves closely for any illnesses in the coming days and weeks, she said. This could include either respiratory or stress-induced sicknesses.

Long-term effects of the blizzard may take some time to show up in the calves that did survive, Grussing said. "Having a good line of communication with your veterinarian will be important to limiting any further losses."

Weiser said he has had a few sick calves recently with the lingering winter-like weather, but nothing too severe. 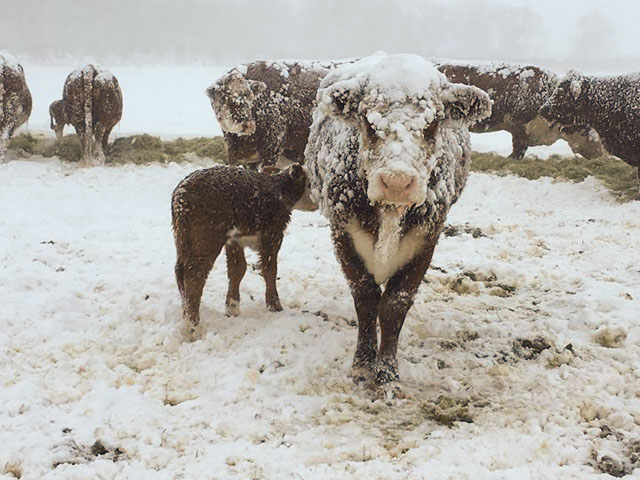