OMAHA (DTN) -- The two largest general farm organizations have a different take on what should happen with the Section 199A tax provision, but 77 separate businesses in 28 states also have written a letter to Congress calling on lawmakers to fix the problems created by the "grain glitch."

The letter includes companies as small as a local grain elevator on up to grain-trading giants such as Archer Daniels Midlands Co., Bunge North America, Cargill Inc., Tyson Foods and even Anheuser-Busch.

The companies, writing to the four main leaders in the House and Senate, stated, "We are concerned that language in the Tax Cuts and Jobs Act has fundamentally disrupted the agricultural economy by giving farmers, ranchers and dairy producers a substantial tax incentive not to sell their products to thousands of independent companies across the American heartland."

Further, the businesses stated that if the Section 199A provision is not changed, "countless businesses -- including thousands of small, family-owned independent companies -- will be forced into costly restructuring, selling to rivals or going out of business. This will not only destroy homegrown jobs and rural economies, but it will also disrupt the supply chain for agricultural products and destabilize the market for everything from milk and grain to meat and poultry."

The agribusinesses made it clear they support the language change in the tax code backed by farmer cooperatives and businesses that would provide farmers with a deduction similar to what they received under the old Section 199.

"This fix is a win-win solution that levels the playing field for co-ops and independent operators, while restoring a competitive market for farmers and giving them the deduction they deserve," the farm businesses wrote.

The tax language would eliminate a 20% deduction on all gross sales to farmer cooperatives that was included in the Tax Cuts and Jobs Act. No sooner was the tax bill signed than the grain industry determined it was leading to "unintended consequences" in the sale of farmer commodities. Lawmakers said they did not intend to distort the commodity markets when they drafted the tax break.

The American Farm Bureau Federation also wrote a brief letter to congressional leaders supporting the tax change and supporting its inclusion in the 2018 omnibus spending bill, which could be approved by Congress next week. Farm Bureau noted the benefits farmers receive in the Tax Cuts and Jobs Act, but added, "Unfortunately, Section 199A had the unintended consequence of distorting commodity markets and treating farm and ranch businesses differently depending on where they sold their commodities."

Farm Bureau added in its letter, "The proposed solution restores the balance of competition within the marketplace and provides fairness in the tax treatment of farm and ranch businesses. The need for swift passage is critical to provide certainty to farmers and ranchers as they sell stored commodities and make marketing decisions for this year's crop."

Countering Farm Bureau, and much of the agricultural industry, the National Farmers Union is asking Congress not to repeal the tax break and to reject the new draft language released earlier this week. NFU passed a "special order of business" defending the Section 199A deduction "due to its value in improving the livelihood of farm families and in strengthening rural communities."

NFU President Roger Johnson said that corporations received one of the largest tax breaks in history. The Section 199A change was an attempt to level the playing field for cooperatives. Repealing much of that deduction "would be to strike at the single most important benefit family farmers received from tax reform."

Johnson added, "Not only would corporations be better off, but farmers would be disadvantaged by working with their cooperatives. Wage limits contained in this proposal will discriminate against family farms that don't hire outside workers, especially if they work with small cooperatives who also have a limited wage base. Farmers could alternatively see the 20% deduction on taxable income reduced to 11%, if they do business with a co-op. Under this new proposed language, farmers could sell to a private company and lock in the 20% deduction, or they can sell to a co-op and receive an 11% deduction."

The language released earlier this week by the National Council of Farmer Cooperatives and National Grain and Feed Association creates a complicated equation for cooperatives to share a tax break with farmers. Like all non-corporate businesses under the new tax law, farmers get a 20% deduction on their qualified business income. Under the new language, they would lower their deduction by the lesser of either 9% of qualified income subject to cooperative sales, or 50% of wages paid by the farmer to employees. Then the farmer would add back any pass-through benefits from the cooperative on new Section 199 language.

The tax provision would also be retroactive to Jan. 1, 2018, so farmers would not reap large rewards for grain sales they made to cooperatives earlier this year.

Several lawmakers endorsed the new language on Wednesday, including the leadership of the tax-writing committees in Congress. USDA also issued an endorsement from Greg Ibach, undersecretary for marketing and regulatory programs. "Federal tax policy should not be picking winners and losers in the marketplace," Ibach said. 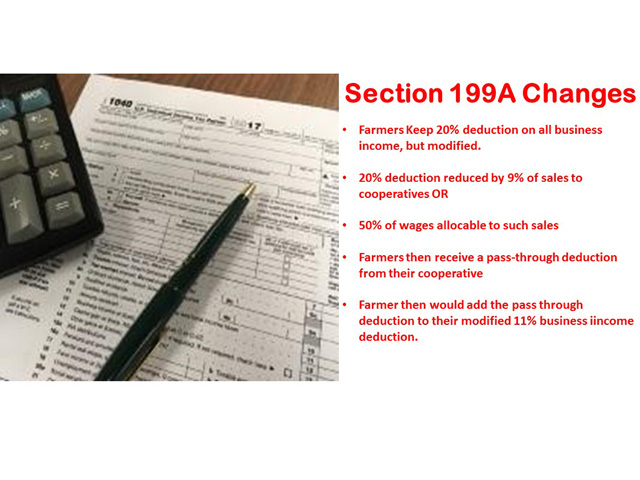