MILWAUKEE (DTN) -- The general mood at the National Agricultural Bankers Conference was still upbeat, thanks to stable farm land values, low interest rates and better livestock prices. But the more than 700 bankers from 37 states and Canada at last week's meeting conceded that three to four years of low crop and dairy prices have some producers skating on thin ice.

Dave Kohl, professor emeritus of ag economics at Virginia Tech, estimates bankers will be scrutinizing the bottom 30% of producers who are barely making a profit. At the same time, Kohl advised bankers not to forget about the top 40% of producers who are still making money and are positioned for opportunities. The middle 30% will be looking for bridge loans to get them through this continuing downturn.

Kohl, who has been advising agricultural bankers for more than 40 years, admonished the bankers to not bridge farmers and ranchers who would be better off getting out of the business now while they still have equity. "If you keep walking them further to the end of the pier, the water is getting deeper. You're not doing them any favors," said Kohl.

WHEN ARE PRICES COMING BACK?

Kohl said he gets asked this question all the time. His short answer: "It's unlikely, unless there is a catastrophic event."

In his long answer, Kohl walked the bankers through the four waves of economic cycles.

c) The defensive wave is coming next. From 2018-2021, Kohl predicted a widening gap of economic performance by farmers/ranchers, core equity burn (increasing leverage), steep decline of marginal land and increasing vendor/nontraditional operating credit as regulated lenders shut off operating credit for poor-performing borrowers. "Yet, even during this time, the top 40% of ag producers will grow their business," Kohl added. Banks need to be ready to launch those opportunities with credit, he advised.

d) The regeneration wave from 2021-2025 will be consumer driven, data driven and people driven with more diversity on how farm and ranch businesses are organized. "One-size enterprise does not fit all," said Kohl.

"We will see more consolidation in agriculture." The winners, predicted Kohl, will be those who calculate profitability by field or head, who are nimble at responding to changes in the market, who continually and critically look at their business and lifestyle for ways to make adjustments, and those who increase their knowledge and understanding through peer groups, reading, seminars and webcasts.

Drilling through the numbers, Robert Craven from the Center for Farm Financial Management at the University of Minnesota said the difference between the top 20% and bottom 20% of producers was not so much yield or cash price or even owned versus rented acres. The big difference came in expenses and hedging gains.

Actual seed, fertilizer, chemicals and rent expenses for corn production in the southern third of Minnesota in 2016 for the farm business group differed from an average of $665 per acre for the high-return 20% producer to $863 per acre for the low-return group -- a difference of about $200 per acre.

"And it wasn't just the big guys making money," noted Craven. "When we looked at number of acres farmed, there wasn't much difference between the 1,000- to 1,500-acre producer and the 2,000- to 5,000-acre farmer in terms of net return. Farm size did not necessarily determine profitability. Cutting expenses and better marketing was a much bigger factor," Craven reported.

"How quick can the borrower come to cash?" Kohl asked. Beware of "accounts receivable," warned Kohl. "If a farmer does custom work and has a lot of accounts receivable, he may not get paid." How much is that inventory in the bin worth now? Was the farmer waiting to sell the rest of his 2016 crop at higher prices that now appear unreachable?

Another potential problem is income tax. If a producer can't afford to pre-pay next year's expenses and has to sell more crop this year to pay bills, he may get socked with a large income tax liability that soaks up even more cash, Kohl cautioned.

Increasing credit card debt is also a problem. Is the farmer looking at other sources for credit?

Have you already re-financed him once? "There have been a number of loans that were restructured five years ago that are due to re-set," said Kohl. "If the earnings aren't there, do you really want to increase term debt?"

Kohl advised bankers to ask tough questions: Is the borrower refinancing because of poor lifestyle habits (they refuse to sell their lake house; they can't downsize their living expenses)? Do they have poor management habits? Can those habits be corrected? Did they fail to build working capital in the good times? What is the quality of their collateral?

If a farmer is willing to sell some farmland, its value will depend on who they want to sell it to, said Steve Bruere, president of People's Company, a farm brokerage and management company based in Clive, Iowa. "Right now, neighboring farmers are paying top dollar and are keeping land values high," reported Bruere. "However, I see about a 20% to 25% discount to values for investor interest." Investors want more than a 3% return, which is $300 rent on $10,000/acre ground. "We can find investors all day long for 4% returns on sustainable rent ($300 rent on $7,500 per acre land). It seems like the investors are 20% below the market in many cases."

DIFFICULT DECISIONS WILL HAVE TO BE MADE

Some of the workshops at the bankers conference covered how to have that difficult conversation with a borrower and how to manage stress. However, the financial landscape is better than it was in the 1980s. Land values are relatively strong. Loans may be troubled, but they are not underwater. And "anyone in rural America with ambition can get a job," said Blake Howsden, president of Nebraska State Bank in Oshkosh, Nebraska.

Sometimes, even difficult decisions turn out for the best.

Marshfield, Wisconsin, banker Bradley Guse with BMO Harris bank related this story about a farm family he had to transition out of production agriculture: "It was really a tough situation, but they just weren't making it. They got out of farming. About three to four years later, I was at a community meeting and the wife came up and gave me a hug and thanked me. She said getting out of farming was the best thing that happened to her family."

Guse recognized that while it was a tough discussion to have, liquidation is sometimes the right thing to do for an operation in order to preserve a family's equity. 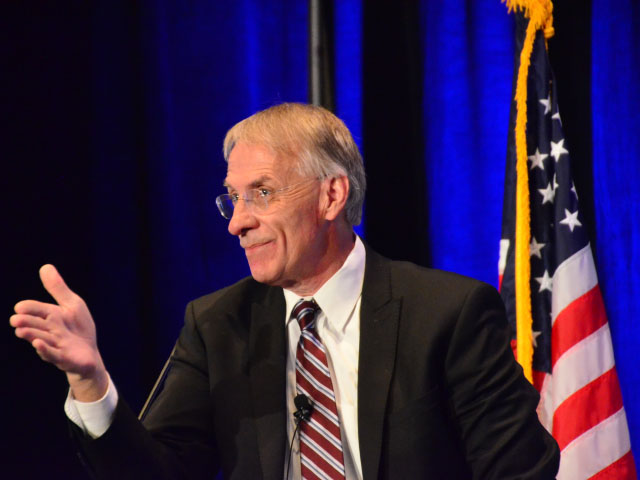