At some risk of overgeneralizing, agriculture is as it has long been -- crops, livestock and poultry. The average age of a principal American farmer continues to rise and is now pushing 60 years, continuing a 30-year trend, according to the 2012 Census of Agriculture. A principal operator is the primary manager-owner of an operation.

As older farmers retire, a question often asked is "Who will be the next generation of farmers?" Beginning farmers face multiple challenges to gain a foothold in this industry, with or without a family member already established in production agriculture.

But that didn't discourage the farmers profiled in the following series during the next few days called New Faces of Ag. Some took conventional routes to farming while others followed twisting and turning paths.

Regardless of the roads traveled, these new faces of agriculture all share a passion for farming and a fearless determination to succeed.

Take Texan Josh Eilers. He overheard a guy say he paid $100 for a Wagyu steak. "I decided that if you could raise cattle worth that much money, that's what I wanted to do." Twenty-two percent of operators were beginning farmers in 2012 (less than 10 years on the farm). Beginning farmers are likely young, yet 35% are at least 55 years old, 13% are 65 years old.

"What I needed was opportunity to learn about the money and the stress that goes with farming," said Jill Lambert, who returned to the family's Brush, Colorado, farm after a 13-year absence. Fourteen percent of the nation's farms are operated by women and are more likely to be found on beginning operations than on established farms.

"I decided I missed the farm," said Joel Lange, of Bagley, Iowa. He and brother, Stephen, moved back to the Nebraska family farm. When their father, Mark, sold that farm and moved to Iowa, his sons followed. Eighty-five percent of 470,000 beginning farmers operated beginning farms in 2012, but 15% are jointly operated with experienced farmers.

There are great stories. All show that while farming and ranching is evolving, American agriculture remains alive and well.

How two Nebraskans wound up farming in Iowa.

Even though they grew up on a Nebraska row-crop farm, neither Joel Lange nor his brother Stephen planned to farm. They certainly didn't plan to move 250 miles east and farm in Iowa. But life doesn't always follow a script. In this case, it led Joel and Stephen to 1,800 acres in west-central Iowa where they now happily plan to make a career of farming.

Joel (now 30) had no clear career path in mind as he was growing up outside O'Neill, Nebraska. He signed up with the Marine Corps Reserves after high school and served his country for four years. Although he wasn't deployed overseas, the time away from home told him he was missing something. "I decided I missed the farm enough I wanted to come back," he said.

Meanwhile, Stephen (now 28) went from high school to college to study chiropractic therapy. A career adjusting spines lost its appeal after a couple years in classrooms, and Stephen, too, felt pulled to the farm. "I like doing different things throughout the year," he said. "With farming, there is always something different, always a challenge."

The brothers' father, Mark, was happy to let the boys come back to farm, and he turned over day-to-day operations of the Nebraska farm a little at a time beginning in 2008. Farming Nebraska soils seemed to be the future for the brothers until Mark decided to sell the land and move to Iowa.

That's not a move you hear about very often, but Mark had his reasons for wanting to move. His Nebraska land was irrigated, and the water table had been dropping for years. In other parts of the state, water restrictions already were in place. Mark calculated that his land was worth more without restrictions than it would be with them, so he put it on the market. At the same time, he went looking for a similar amount of land in Iowa and Illinois. As good fortune would have it, he was able to sell his 1,500 acres in Nebraska and buy a similar amount in Iowa for about the same price.

The Langes packed up their belongings and moved to Bagley, Iowa, after the 2012 harvest.

Mark owns most of the land his sons farm and rents it all to them. They have added 300 acres on their own. By anyone's estimation, the brothers have done well.

They bought an Orthman strip tiller plus a Montag dry cart and pull anhydrous rig for dual placing fertilizer. That's how the Langes manage their own ground, but they also use the equipment to bring in cash by strip-tilling and placing fertilizer for others. They recently bought a tile plow with the same scenario in mind.

Another source of income is machinery rental. The Langes brought a new John Deere S670 combine with them from Nebraska. Last year they rented it through MachineryLink Sharing to wheat farmers in Kansas and Montana. When it came back, they used it for their own corn and soybean harvest. The rentals brought $48,000 in income.

Joel does the farm's paperwork and marketing as well as helping in the field. He also manages the farm's technology, which includes everything from variable-rate applications to satellite imagery. Stephen is the equipment guy and does most of the fieldwork.

After coming late to the idea of a career in farming, Stephen said his goal now is "to be a better farmer." 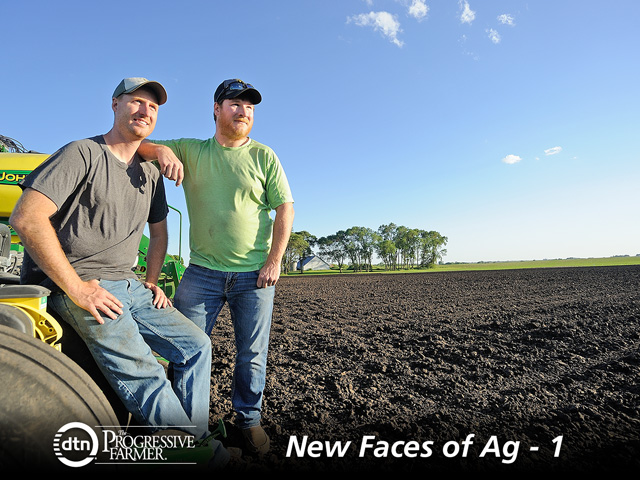