I recall a day I spent with Robert Blair, a fourth generation dryland farmer from Kendrick, Idaho. We talked about drones -- and, more importantly, the technology needed to decipher the multi-spectral photos he was taking while remotely flying his farm. Blair has been deep into drones since 2003. As vice president of agriculture for Measure, an aerial sensing start-up, he is a leader in the art of agricultural aerial photography and interpretation.

Last year I visited J.R. Shannon, one of our America's Beat Young Farmers and Ranchers for 2017. He showed me a new piece of irrigation technology going up on his farm that day. Smartfield, Inc., Lubbock, Texas, was installing its FIT system to measure the temperature of the tree canopy. Its infrared cameras read stress on the leaves of trees and vines, to determine the best times to irrigate.

The technology and management resources you all bring to the game are fairly amazing to me, so that's why Forbes caught my attention with its list of the top "25 Most Innovative AgTech" startups. The list was published late last month during its third annual Forbes AgTech Summit in Salinas, California.

These are not technologies "out there" -- floating around somewhere on the horizon. This list is a glimpse of the high-tech game going on around, and among you, right now.

AGERpoint: This startup produces nut and citrus orchard management software that uses satellite data. The data is granular enough to provide tree-specific information, like the size of the canopy or the trunk diameter. The company expects to break-even in 2017 with $3 million in sales.

Arvegenix: Former Monsanto executives lead this startup, which is developing a new cash crop called pennycress that can be added to field rotations between corn and soybeans. The winter cover crop protects the soil from erosion.

BluWrap: Using a patented oxygen management technique that extends the shelf life of fresh protein, BluWrap allows fresh protein suppliers to ship by ocean rather than by air, saving on costs.

BrightFarms: BrightFarms builds and operates greenhouses in urban and suburban areas. The company partners with supermarkets like Giant, ACME, and Pick-n-save and puts the farm at or near the store to maximize produce freshness.

Clear Labs: This science startup is making a database of the world's food supply by studying food on a molecular level. The goal is to use the information to help food retailers pick the best suppliers and avoid the next crippling food-borne illness outbreak.

CropX: An Israeli startup, CropX sells cloud-based software that aims to boost crop yields by focusing on saving water and energy. With in-field sensors, the system automatically delivers the correct amount of water to each plant instead of watering a whole field at a time.

Farmers Business Network: This big data company connects more than 3,400 small farms with open data about yields, supply prices and other information that lets them compete with large operations.

FarmLead: An online marketplace for grain, FarmLead lets grain growers expand beyond their local market and sell to the best bidders. Buyers and sellers can register for free, and deals are negotiated anonymously.

FoodLogiQ: The average foods recall costs companies $10 million. FoodLogiQ aims to reduce those costs by using data to track a supply chain from the farm to the fork, ensuring the correct foods are recalled.

Full Harvest: Twenty billion pounds of "ugly" produce go to waste in the U.S. each year. Full Harvest is trying to reduce that waste by building a B2B marketplace where growers connect with food companies to offload surplus or imperfect produce.

Mavrx: This startup's software allows farmers to visualize their entire fields in an instant, highlighting areas where resources need to be directed and benchmarking crop performance.

mOasis: mOasis makes a non-toxic gel-like soil additive that helps seeds get farther on less water. It works by holding extra water near a plant's roots and releasing it was the soil dries out.

Produce Pay: Founded at Cornell University in 2014, this supply chain startup aims to fix cash-flow problems by paying for the product the day after it is shipped, rather than the typical 30-to-45 day waiting period.

RipeIO: Former financiers are bringing block chain technology to the food supply chain. Its algorithms crunch data to calculate sustainability scores, as well as scores for spoilage and safety levels.

S4: Argentina-based precision ag company that pays producers or companies along the supply chain when systemic risks like drought or flood occurs. The startup expects $2 million in revenue by the end of the year.

Sample6: Sample6 claims to be "the world's fastest food pathogen detection system" by detecting a bug within six hours. Its products can detect pathogens and listeria in plants.

Spensa Technologies: Its software lets farmers record, upload and track observations about their fields; its Z-Trap hardware allows farmers to track pests in the fields by trapping and identifying bug species.

Strider: A Brazil-based ranch management startup that sells a pest monitoring application that allows farmers to monitor and decide how to treat infestations.

Terviva: An Oakland-based company that is cultivating the pongamia tree, which is native to Australia and India, on American soil. The trees produce an oilseed with 10 times more yield than soybeans and have the potential to create a biofuel alternative. 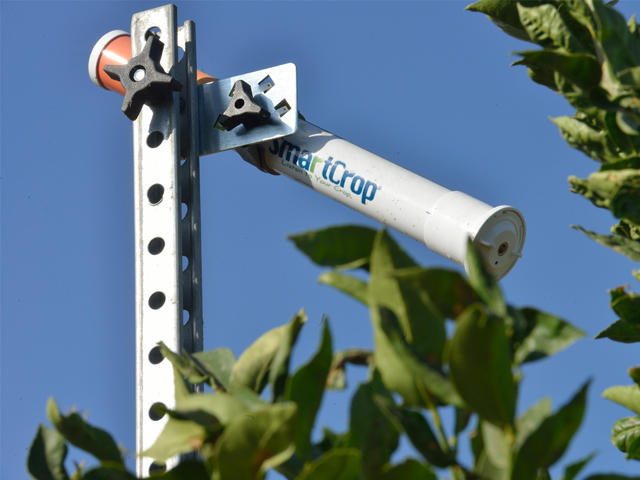