ASHLAND, Kan. (DTN) -- Ranchers whose rangeland was affected by wildfires this spring in southwestern Kansas and northwest Oklahoma are seeing the recovery process progress faster than many expected. Since March, moisture has increased. While the destructive fires burnt structures, animals and fences, there could be some long-term positives for the health of the range after the fires.

In a meeting May 18 put on by Oklahoma State University (OSU) Extension and Kansas State University (KSU) at the Snake Creek Ranch south of Ashland, Kansas, Extension personal from both states discussed how wildfires affect range ecology. They also covered how the fires affected livestock and possible grazing practices ranchers could employ after fires. In addition, a panel comprised of Extension educators from counties affected by previous wildfires and local ranchers discussed how the recovery process went in their areas.

Justin Barr, OSU Extension educator in Ellis County, Oklahoma, said moisture after the fire will dictate how quickly the recovery process goes. The entire region has seen plentiful moisture since the fires and this has allowed grass to grow and pastures to turn green.

Barr, who is a volunteer firefighter and runs his own cattle, has seen several wildfires over the last 10 years. Moisture after wildfires will heal the range considerably faster than one would expect, he said.

"Moisture, more so than the duration or intensity of the fire, is the one factor that will dictate how fast or slow the grass recovers," Barr said.

Tim Marshall, KSU Extension educator for Barber County, Kansas, agreed with Barr. After the Anderson Creek wildfires hit part of his county in March of 2016, most producers feared range recovery could take months, if not years.

The range actually recovered much quicker.

"As with this fire, we had timely rains after and the effects to the grass itself was minimal," said Marshall.

For rangeland that was in good shape before the fires, and then got the timely moisture, ranchers did not need to reduce cattle numbers on the affected land by much. However, Barr said, land in poorer shape before the fires or with more sandy soils could see stocking rates reduced to half the number of animals in a normal grazing setting.

Barr said he is a big proponent of prescribed fires to eliminate unwanted plant species, as well as limit the spread of the eastern red cedar, a pest that can take over rangeland if not controlled. He tries to burn rangeland at least every six to eight years to control red cedar and wishes others would also use controlled burns to do the same against those cedars if they were missed by wildfires.

Another good strategy, in addition to lower stock rates, is to delay when cattle start to graze on rangeland.

Greg Highfill, OSU Extension educator for Woods County, Oklahoma, said allowing the grass a period of rest before grazing will be important for rangeland burnt by fires. Again, the condition of the range before the fires could decree how much delay in grazing is needed, he said.

All three Extension educators stated that a year after the fires in their respective counties there were not many long-term issues with affected rangeland.

In addition to how wildfire affected rangeland, there was some discussion on how livestock emerged from the fires.

Cattle that survived the fires face a list of health issues that affect their ability to breed and support a calf down the road. Burnt hooves, hides, udders and teats can all have long-term effects, Highfill said.

Cows that suffered scorched udders or teats need to be examined closely to see if the damage is permanent or if recovery is possible, he said.

Highfill said he has his own cow-calf herd and in previous fires he had cattle with mildly scorched udders. These cattle recovered and were able to support a calf in future years.

Marshall said if there is any doubt about the effects of scorched udders, it is probably better to err on the side of caution; move these possibly affected cows to town now for sale, rather than face issues down the road.

Cattle can also be affected by the amount of smoke inhaled. Smoke in the lungs can lead to several health issues such as bronchitis, congestive heart failure, chronic obstructive pulmonary disease, emphysema and asthma.

"My vet recommended we treat the calves (for possible lung issues) so we ran them through the chute," Highfill said. "We didn't treat the cows and we never really had any issues with them."

Another topic raised at the meeting was possible weed introduction from donated hay from other areas, including other states.

The rancher who asked the question said he was only feeding the donated hay in one spot in his lots for fear it could have weed seeds in it. He was very concerned he could be introducing a new weed to his area, he said.

All three Extension educators agreed this is a valid concern.

Marshall said he "has no doubt" these donated bales of hay have weeds in them not found in southwestern Kansas and northwest Oklahoma. He recommended producers feed this hay in one spot and then spray herbicides on any weeds that grow later. This will prevent the spread of new weeds.

Barr said when he worked in Roger Mills County, Oklahoma, in the 1990s as the Extension educator, there was a weed found in the county and no one knew what it was. He sent it to the OSU weed scientist and found out it was Scotch Thistle, a weed not found in their county.

"In the 1970s, they air dropped (donated) hay to the dairies in the county during severe winter storms and we speculated that is where this weed came from," Barr said.

Highfill said during the time after the fires this March, an Extension educator in a county in southern Oklahoma stopped hay donations coming up from Texas from crossing his county for concerns about fire ants being in the transported bales, and thus exposing his county to the pest.

"We need to really think about things like this to keep these unwanted visitors out," Highfill said.

DTN staff reporters Russ Quinn and Todd Neeley recently traveled to some of the areas in Texas, Oklahoma and Kansas that saw wildfires race through earlier this year. DTN's special coverage coming up includes a closer look at how some of the ranchers and communities were affected by the wildfires, how they responded and recovered, and lessons learned for the future. 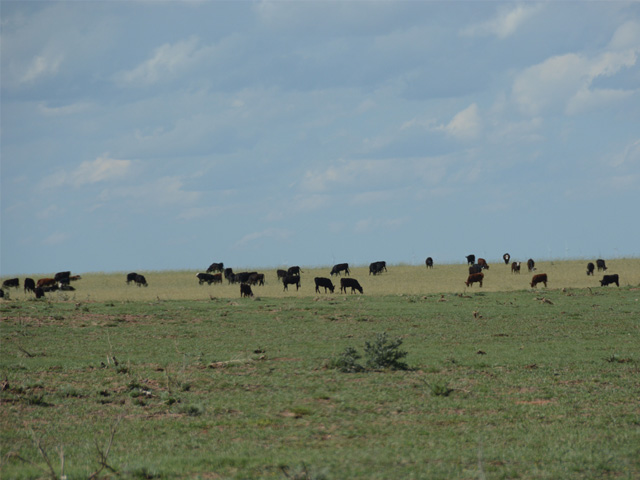