OMAHA (DTN) -- Biofuel supporters largely keep pointing to President-elect Donald Trump's campaign statements on ethanol, but the stack of nominations coming from Trump with far closer ties to oil than ethanol is quickly starting to raise some red flags.

Trump has largely built his energy team over the past week with the nomination of Oklahoma Attorney General Scott Pruitt to head the Environmental Protection Agency, followed Monday with the Secretary of State nominee of Rex Tillerson, chairman and CEO of ExxonMobil. Former Texas Gov. Rick Perry was announced early Wednesday as nominee for Energy Secretary.

All three nominees have battled against the Renewable Fuel Standard and other policies that benefit biofuel production.

"If you really wanted to get rid of the RFS, wouldn't these be the guys you would hire to do it?" Kruse said. "All of these guys have been as Big Oil and anti-biofuel as you can possibly get."

Sen. Charles Grassley, R-Iowa, went to his Twitter account Wednesday to state "I intend to grill EPA director designee Pruitt & Energy Secy designee Perry on ETHANOL." Grassley added in an abbreviated form that Trump supports ethanol so they should as well.

Ethanol and its byproducts such as distilled grains are projected to take 5.3 billion bushels of corn use in the 2016-17 crop, or about 31% of total supply. About 807 million gallons of soybean oil will go to biodiesel production as well. Both products are significant in the demand for both crops.

The South Dakota-based American Coalition for Ethanol sent out a "call to action" Dec. 8 to its members urging them to contact their senators about Pruitt's nomination. ACE wants commitments from Pruitt to support the RFS and "remove regulatory restrictions on the use of E15 and flex fuels." Pruitt had filed a court brief backing the American Petroleum Institute and Grocery Manufacturers Association lawsuit trying to overturn EPA's ruling to allow E15 in cars built after 2000.

"Given the role EPA has in clearing regulatory roadblocks for ethanol to compete in the marketplace, it is critically important for ACE members and ethanol advocates from all walks-of-life to encourage their U.S. Senators to ensure Mr. Pruitt will keep the RFS on track and remove government restrictions on the use of higher blends of ethanol before they vote to confirm him to lead EPA," ACE stated.

Iowa Gov. Terry Branstad, now nominated by Trump to be ambassador to China, sought to ease concerns Dec. 13 during a press conference on his transition for governorship. Branstad said Trump assured him not to worry about ethanol policies during Trump's victory rally last week in Des Moines.

"He's (Pruitt) is from an oil state and obviously that gave us a little concern," Branstad said. "The first thing Trump told me is 'Don't worry about him. He's going to be for ethanol.' I think that's a condition that he (Trump) basically laid out when he appointed him. Trump's a pretty blunt, direct guy and that was reassuring to me."

Rick Tolman, former CEO of the National Corn Growers Association, spoke about the incoming Trump administration Dec. 13 at a Farmer Business Network meeting in downtown Omaha. Tolman first praised expectations that Trump would take the burden of regulations off U.S. businesses. Tolman, though, then pivoted to defend the Renewable Fuel Standard and the mandate on biofuels to ensure that biofuels could compete in the marketplace without all of the other outside industries clamoring to reduce or eliminate the RFS.

"We need to get E15 in the marketplace without all of the suits and the regulatory issues that are going on," Tolman added.

Policy on biofuels plays out in several related ways. Renewable Identification Numbers (RINs) are used by EPA as the compliance credit gasoline blenders must submit to comply with the Renewable Fuel Standard. RINs are bought and sold by obligated parties in a market designed to provide flexibility in complying with the RFS. But RINs are viewed as costly by investors. Hedge fund king Carl Icahn, a Trump supporter and confidant, has been a strong critic of RINs.

"The RINs are the enforcement mechanism for the RFS," Kruse said. "So I'm just looking at what's happening and it's not matching what we have been told."

Further, Kruse said EPA could dial back some of Obama's efforts to increase mileage efficiency in automobiles. What happens to higher fleet mileage standards for vehicles is important to ethanol as well. Higher fuel standards for 2025 and beyond would demand engines with higher compression. Such engines would lead to higher ethanol blends because those engines also demand higher octane.

"By reducing those targets, you will hurt ethanol," Kruse said.

Trump followed up Pruitt's selection by picking Perry to run the Department of Energy. As governor of the country's largest oil-producing state, Perry had been a critic of the RFS as far back as 2008 when he pushed for a waiver that was denied by EPA.

ExxonMobil, as the biggest U.S. company in the oil industry, has pushed to cap ethanol blends in gasoline. Ken Cohen, who was ExxonMobil's vice president of public affairs last year, wrote after the EPA settled a lawsuit over the RFS that the law had little public support and needed to be scrapped or heavily modified.

"ExxonMobil and the rest of the petroleum industry have strong feelings about the Renewable Fuel Standard. No surprise there, as these complex regulations legally obligate us to buy someone else's product and blend it into the motor fuels we manufacture to sell to consumers," Cohen wrote.

"I've detailed on many occasions why this is a bad program. And I am not alone in thinking this -- few issues have amassed such a broad consensus across the political and ideological spectrum as the idea that the RFS is a mistake," Cohen wrote. According to a brand new poll, "voters across party lines oppose requiring increasing amounts of corn ethanol be blended in gasoline. The RFS should be scrapped or, at the very least, reformed." (See http://exxonmobil.co/…)

While ACE sent out an action alert on Pruitt's nomination, the two major Washington-based trade groups for biofuels have been more muted and upbeat in their response. The Renewable Fuels Association issued a statement last week regarding a letter sent by the Biofuel Governors' Association to Trump. "The president-elect understands the importance of clean, domestic energy resources and the economic power of value-added agriculture. We are confident he will continue to support the RFS and expanded production and use of fuel ethanol during his administration," stated RFA President and CEO Bob Dinneen.

Emily Skor, CEO of Growth Energy, also praised Trump rather than question the president-elect's nominees. "President-elect Trump is nominating individuals who he feels are best able to help him carry out his vision for America. President-elect Trump has made his position on the Renewable Fuel Standard (RFS) clear. He understands its importance and on the campaign trail repeatedly made a commitment to America that he will preserve the RFS and pursue a policy that supports domestic energy production, America's heartland, and the hard working Americans who helped him win the White House."

Tolman reiterated a point made over and over by farm leaders since the election. "Trump has an obligation to rural America because farmers put him in office." 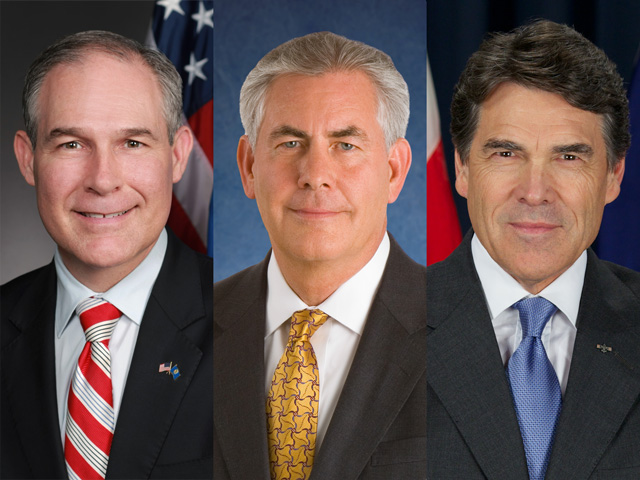