HOT SPRINGS, Ark. (DTN) -- Randy Veach, president of the Arkansas Farm Bureau, is counting on President-elect Donald Trump not following through on a vow to drop out of the Trans-Pacific Partnership.

Arkansas voters picked Trump by a 26.9% margin, one of the widest in the country. Farmers and rural residents came out in a big way for Trump. Those voters want to see a Trump administration keep his promise to improve trade access.

The Arkansas Farm Bureau is holding its annual meeting this week in Hot Springs where expanded market access was a key topic for members who are increasingly stressed about lower commodity prices. Veach told DTN Wednesday he recognized the Trans-Pacific Partnership (TPP) was not going to get a congressional vote before the end of the year. But Veach was holding out hope that Trump would not abandon the 12-nation trade deal.

"I think we will continue to move forward with TPP in some form, even though what the president-elect said," Veach said.

Trump, in a YouTube video last week, said he will withdraw from the trade deal in one of his first executive actions when he takes office in January. Trump called TPP "a potential disaster for our country." Trump said his administration would instead negotiate bilateral trade deals.

Veach said he thinks the Trump administration would not kill the deal, but look at making possible changes to TPP. Veach added he thinks the deal could be improved to increase access for U.S. rice and dairy farmers. Those products didn't get the market access their farmers had hoped in TPP. Still, Veach said he hoped Trump and his administration would reconsider President Barack Obama's current stance on the trade pact.

"If there is the possibility of making some improvements that he (Trump) feels like are improvements for our farmers and ranchers and our nation, then we may still see TPP come about," Veach said.

Hutchinson highlighted the importance of agricultural trade when talking to Trump. "I stressed to President-elect Trump the importance of the global market to Arkansas -- Arkansas' economy," the governor said. "That is true for agriculture, but it is also true in terms of exports and true in terms of the opportunity for direct investment with China here in this state."

"Not only did we talk about the 11 million people there in Cuba who want and need our rice, they need our agricultural products and specifically they needed our poultry," Hutchinson said.

Cuba has since ordered 4,500 tons of Arkansas poultry, Hutchinson said. The governor made it clear he believes the death of dictator Fidel Castro creates an opportunity to increase trade with Cuba. "With the death of Fidel Castro, it's like the expectation level went up," the governor said.

Hutchinson added he hoped the Arkansas congressional delegation would continue to work to get better credit terms with Cuba to help further boost the potential for agricultural sales.

Trump also heavily criticized China currency and the U.S. trade deficit with China throughout the presidential campaign. Hutchinson, however, highlighted his trade missions to China and the fruits that came from those visits.

Hutchinson added he also has pushed for China to open up its markets to more U.S. feed grains, poultry and rice as well. "That market needs to be open to us," he said. "So the global market is important."

Regarding the financial situation of Arkansas farmers, "everybody is kind of in the same boat," as net farm income is down more than 50% from two years ago, and the decline could be even steeper once the final numbers are tallied, Veach said. "The issue that we're dealing with now is how do we manage input costs, for sure, and how do we manage markets," he said. "Those are going to be big issues for all of our farmers and ranchers out there."

Veach noted there was no bright light at the end of the tunnel, but selling more products overseas would help tremendously. As much as 40% of the commodities grown in Arkansas are exported, with soybeans, rice and poultry topping the list.

"There is going to be quite a bit of the market that is going to kind of depend on where we end up with trade," Veach said. "We have got to have trade to continue to be profitable."

Veach pointed to greater demand for operating loans, which farmers are now working to secure for 2017. "We just need all of our farmers to still be in business and farming next year, because we can't afford to lose any more of our good farmers," he said. 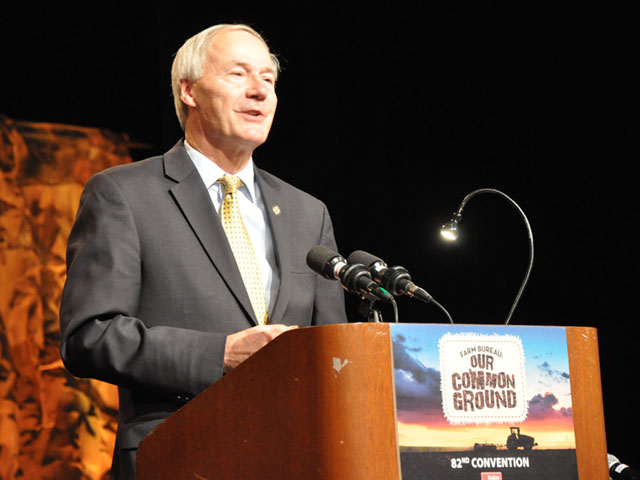