KEARNEY, Neb. (DTN) -- At a luncheon during Nebraska Gov. Pete Ricketts' Ag and Economic Summit, the governor touted his 2019 trade mission to Vietnam that led to as much as $3 billion in business deals, including commitments to buy Nebraska agricultural products.

Ricketts wanted more, asking Daniel Kritenbrink, a Nebraska native who is now assistant secretary of state for East Asian and Pacific affairs, how the Biden administration could get Vietnam to commit to lowering existing tariffs on U.S. beef, which range from 14% to 20%, depending on if the beef is frozen or fresh, while Australia has no tariff because of a free-trade agreement. "Even with that tariff we've seen our beef exports grow," Ricketts said.

"I know the tariffs are a top issue," Kritenbrink said in a Zoom livestream with Ricketts.

Ricketts then plugged the need for the U.S. to move ahead with more free-trade deals. "Unless the United States works very aggressively at that, our exporters can be at a disadvantage."

Ricketts also touted the Vietnamese trade delegation from Binh Duong Province, who had a booth and held meetings at the summit. The delegation, which included a vice governor and foreign affairs minister, was led by a Vietnamese real-estate company. They weren't at the meeting to buy more beef, but to recruit Nebraska manufacturers to consider locating new facilities in Vietnam.

Reading an interpreted speech, H.E Mai Hung Dung, vice governor of Binh Duong Province, touted Vietnam's key economic pillar of attracting greater foreign direct investment in the country. Such investment had reached $427 billion from 140 countries, but the U.S. was just a sliver of that investment at roughly $1.2 billion.

"We are looking for U.S. companies to invest in our province," Hung Dung said.

Bill Dao, a North American representative for Becamex Vietnam, a real-estate developer, then pitched the benefits of Vietnam, which includes having half the world's population within five hours of the country. "So, it's very, center, a good location," Dao said.

Dao then repeatedly stressed a key point when it comes to locating manufacturing in Vietnam. The country is part of 15 separate free-trade agreements, including the Comprehensive and Progressive Trans-Pacific Partnership (CPTPP). Companies can send parts to Vietnam, assemble them and add a few more Vietnamese-made parts, then ship those manufactured goods with reduced or lower tariffs to countries such as Indonesia, Malaysia or the Philippines.

"Your buyer does not have to pay import duties," Dao said.

The 15 free-trade agreements came up several times as Dao talked. He pointed to Vietnam's direct link into China, as well as the Association of Southeast Asian Nations, (ASEAN), a ten-country group with 668 million people forecast to collectively become the fourth-largest economy in the world by 2030. "This is 20 times the Canadian population, a big market," Dao said.

The Vietnamese delegation also pitched the country's "stable social and political environment," as well as federal and state incentives for locating in the province. Corporate taxes start at 20% but can go lower, especially for high-tech firms.

Tony Goins, director of the Nebraska Department of Economic Development, said trade with Taiwan should translate into "mutually beneficial outcomes," so Nebraska officials had set up a dinner with the Vietnamese delegation and invited manufacturers to attend.

Kritenbrink, a former ambassador to Vietnam under the Trump administration, said he believes "American history in the 21st century is primarily going be written in the Indo-Pacific."

"When I look at the region, these are the world's fastest-growing markets with young and dynamic societies," Kritenbrink said, "with I think the most promising consumers in many ways for American goods anywhere in the world."

That should be front of mind for U.S. exporters, especially those who export food or agricultural commodities such as Nebraska, Kritenbrink added.

Kritenbrink pointed out the U.S. will host the Asia-Pacific Economic Cooperation meeting next year with a chance to showcase the U.S. Kritenbrink also plugged the Biden administration's Indo-Pacific Economic Framework (IPEF) as a strategy to work with 13 other countries on supply chain issues, renewable energy, digital business and corruption challenges.

On China, Kritenbrink said the U.S. strategy is to "invest, align, compete." He pointed to the recent legislation on semi-conductor chips signed into law. The IPEF is also an initiative to align with like-minded countries. Meanwhile, the U.S. must level the playing field on trade with China and avoid becoming over-dependent. While $600 billion in trade goes on between the U.S. and China, Kritenbrink said, "The situation is very complex." 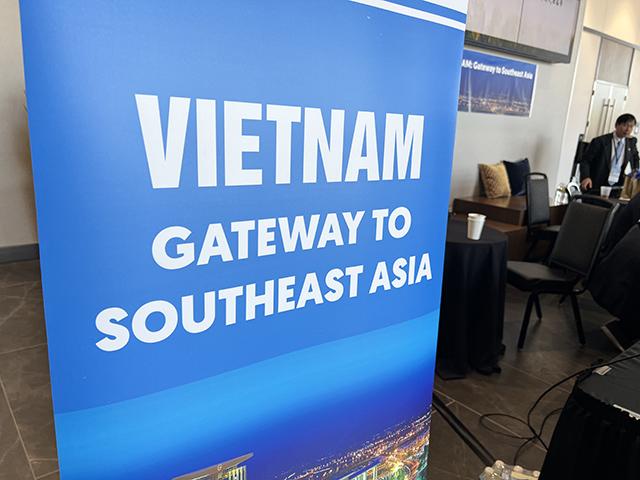