OMAHA (DTN) -- As inflation continues to exact a toll on Americans, rural Republicans in Congress are laying the blame on the Biden administration's regulatory policies and making the case that farmers and rural America would be better off with their agenda by dialing back on the regulatory burden.

The GOP moves come as the House is close to voting Thursday on H.R. 7606, the "Lower Food and Fuel Costs Act," a bill that House Democrats maintain would help with food, energy and fertilizer costs. That bill would ensure E15 continues year-round and would install a special investigator at USDA to investigate competition issues in the meatpacking industry. The bill also would promote precision agriculture by using USDA conservation programs to help reduce the costs for farmers to buy precision technology and get technical assistance to help reduce fertilizer usage.

"This bill is not about scoring political points," said Rep. Abigail Spanberger, D-Va., who has spearheaded H.R. 7606. "It's about trying to bring down the cost of living for the American people and putting our ideas on the table."

Both parties held dueling press conferences Wednesday in Washington to stress their bills and argue they are trying to address inflation while the other party complains.

"American consumers are watching in dismay as their grocery and energy bills skyrocket. Groceries are up 40% in costs. We're in a serious crisis moment, and we need concrete, immediate policy actions to help mitigate the impacts at home and abroad," Thompson said of food prices that are 10.1% higher than a year ago, according to the Consumer Price Index.

Earlier in the week, Republicans said they back several of the provisions in H.R. 7606 -- some of which were drafted by GOP members. But language to create a new special investigator into Packers and Stockyards Act violations was called a "poison pill" that would prevent most Republicans from supporting the bill.

The GOP bill would allow farmers to continue using for at least five years any pesticide that was suspended or canceled by EPA or vacated through a court order. The bill also would declare that glyphosate is not carcinogenic and block states from requiring such labels. In another move, the bill would reinstate the Trump-era Navigable Waters Protection Rule and prevent EPA from rewriting a new definition for waters of the U.S. (WOTUS).

In another move, the bill would rescind a proposed rule by the Securities and Exchange Commission that would require businesses to track and detail greenhouse-gas emissions. Agricultural groups have been pressing the SEC not to require supply-chain emission reporting that would affect farmers.

On fertilizer, the GOP bill would also reduce permitting regulations to encourage mining of potash and phosphate. In livestock, the GOP also would allow faster line speeds at swine and poultry packing plants and slow down USDA efforts to rewrite Packers and Stockyards Act rules.

In a press conference with other GOP House members, Thompson and others highlighted skyrocketing inflation, pointing to farmers paying 115% more for diesel fuel than a year and fertilizer prices more than double what they were a year ago. While Russia's invasion of Ukraine has exacerbated energy, food and fertilizer inflation, Thompson and other Republicans said the inflationary challenges were already on their way before the war began.

"In fact, since the war in Ukraine began, the administration has continued to take nonsensical regulatory and policy actions that have created needless uncertainty for American farmers, ranchers and working families that have further limited our ability to meet the food demand of our nation and, quite frankly, the world," Thompson said.

Thompson and more than 90 other Republicans also sent a letter to Biden earlier in the week outlining many of the same issues in the bill.

Republicans in their press event hit on tax proposals such as plans to end stepped-up basis, which the Biden administration continues to advocate. They also stressed the need for EPA to withdraw its WOTUS rule and find ways to increase the domestic production of natural gas for fertilizer and increase mining capacity for phosphate and potash.

"This administration in content to regulate us into a state of dependency on foreign sources for the key inputs," said Rep. Rick Crawford, R-Ark.

On the Democratic side, Rep. Cindy Axne of Iowa championed H.R. 7606 and the E15 provisions in it, as well as $200 million in funding to help fuel stations expand blender pumps and other infrastructure to sell higher volumes of both ethanol and biodiesel.

"That's going to save a lot of money for a lot of families this summer as we move towards implementing this," Axne said.

Spanberger also stressed that several provisions in the Democratic bill were actually co-sponsored or written by Republicans as well. She highlighted language dubbed the "Butcher Block Act" that will help small meat processors along with Republicans in the Senate who tout the special investigator provisions.

"There is tremendous not only bipartisan support but bicameral support," Spanberger said. She added, "For the agricultural producers who want to see the opportunity to sell and process their meat locally, or who want to know that they can compete with the big guys, this has been an issue for them for a long time."

For more details on the Lower Food and Fuel Costs Act, see https://www.dtnpf.com/…. 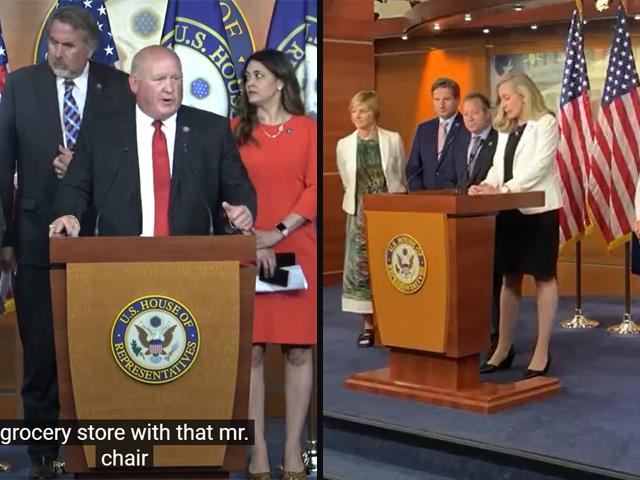