OMAHA (DTN) -- A proposed $1.1 billion beef packing plant in Rapid City, South Dakota, got some backing this past week when the group heading the project also announced the plant would be linked to a facility that would be operated by Farmers Union Industries.

As DTN has reported, Kingsbury & Associates plans to build a plant that would process up to 8,000 head of cattle a day. The proposed plant is expected to take about three years to build and would employ about 2,500 people. If successful, it would become the single-largest beef processing plant in the country.

As KOTA-TV out of Rapid City reported, Megan Kingsbury, CEO of Kingsbury & Associates, told the TV station that the plant would be called "Western Legacy Development Corp." Farmers Union Industries would build next to the packing plant to handle byproducts out of the facility, using meat and bone meal as well as making tallow and grease products for the feed ingredients industry and industrial products, Dale Bednarek, CEO of Farmers Union Industries, told KOTA.

Kingsbury is a fifth-generation rancher in South Dakota who has gotten involved in commercial real-estate and development.

Doug Sombke, president of the South Dakota Farmers Union, told DTN he and others from Farmers Union have met with Kingsbury at least four times now, which led to the joint venture in which Farmers Union Industries agrees to become part of a research and development committee on the project.

"Right now, Farmers Union Industries will be involved. I personally am not sure what my role will be in that, but our CEO will for sure be involved," Sombke said. "She (Kingsbury) is not asking us for any money, I'll put it that way. It's a damned good opportunity for us to help our producers and our own rendering business."

Kingsbury and Bednarek did not respond to emails and phone calls from DTN seeking comment.

DTN had highlighted in an earlier report that the packing plant would be about 25% larger than some of the largest packing plants already in operation that are owned by the likes of Cargill, JBS, National Beef and Tyson, the four largest beef packers in the country.

COMPETITION FOR THE BIG FOUR

James Halverson, executive director of the South Dakota Stockgrowers Association in Rapid City, told DTN in an interview that he and members of his board have talked extensively with Kingsbury about her project.

"We're a lobbying organization that feels like the markets are broken and the Big Four (packers) have a monopoly, and we want to see some competition, so we're huge advocates," Halverson said.

Halverson noted the proposal is "very ambitious" and has some serious hurdles ahead, such as potentially sourcing the volume of fed cattle needed to keep an 8,000-head-a-day plant operating.

"At the end of the day, it's just a personal feeling that there are a lot of cattle out there, and there's very little competition for them. And I think if a new plant can introduce some of that competition and treat producers right, then they are going to be able to compete for those cattle."

Another concern that has come up in the past is that independent plants often find themselves eventually becoming part of the Big Four.

"That's a huge concern for us is to not have another packing plant built and then sold to the Big Four for pennies on the dollar," Halverson said. "That's a legitimate concern, but when I talk to my members, cattle producers, they think that this is a great thing. Hopefully, Megan can address those concerns. I think there's a lot of research and development still to be done."

Construction costs at a time of high inflation could also be a challenge. A former stand-alone with its own history, Iowa Premium in Tama, Iowa, which is now part of National Beef, just this past week halted an expansion at the facility that was slated to take place because of high construction costs. The Des Moines Register reported June 9 that Iowa Premium had "indefinitely paused" its expansion.

In a podcast with DRG Media Group's Jody Heemstra this week, Kingsbury noted the Rapid City project "is still in the research and development stage." Kingsbury talked on the podcast about challenges with profitability and a lack of competition in the packing industry.

"We can blame the Big Four as producers and ranchers and farmers, we can get really angry about it, or we can come together and look for a solution," she said.

On the podcast, Kingsbury said she views the packing plant as a legacy project for her as a South Dakota rancher.

"It's very important for us to do this correctly, to be citizens, be a good neighbor and put America first," she said. "Put that competition back in the market, be that second bidder in the cash market and give hope to the agricultural industry as a whole."

On the size of the operation, Kingsbury said on the podcast she and others have done the research on the ability to support a plant processing 8,000 head a day, which she said is achievable.

"The economies and efficiencies, when one looks at those, point to the fact at a certain point that you might as well be big," Kingsbury said. "It's go big or go home."

Kingsbury added the plant may require looking at the prospects of moving livestock again by railroad or other options that she and others plan to address in the research and development phase of the project.

"But obviously, we want to stick with our main site, as our research points to the fact that it is an ideal location to manage the scale and scope of a project. Where we are on that is the fact we are in the research and development phase, which is all very critical when you are running projects of this magnitude." Kingsbury added, "As you can imagine, there are massive amounts of individuals and organizations and teams and partnerships that I am speaking on behalf of that are supporting me and supporting this effort."

Responding to issues such as odor, Kingsbury said on the podcast that she and others are working with the South Dakota School of Mines and Technology, as well as others, to bring in technology that would manage odors from methane, which Kingsbury said could be captured and contained. She also said there would not be any feedyards on the site.

"We're all about creating a humane environment for the employees as well as for the animals," she said. "Again, there's no feedlots. There are no animals being seen on the exterior of the plant, and we want this to be a place that people are proud to come work for and work with us."

"Until we know specifics, including the location and the operation of the facility, city officials are unable to determine if the use complies with the zoning and Comprehensive Plan and whether the operation of the facility would be a good fit within city limits," said Darrell Shoemaker, a communications coordinator for Rapids City. "Discussion, submittal of plans and questions would go through our Community Development department, and there has been no contact to date."

See, "Proposed South Dakota Beef Packing Plant Would Be Biggest in US," https://www.dtnpf.com/… 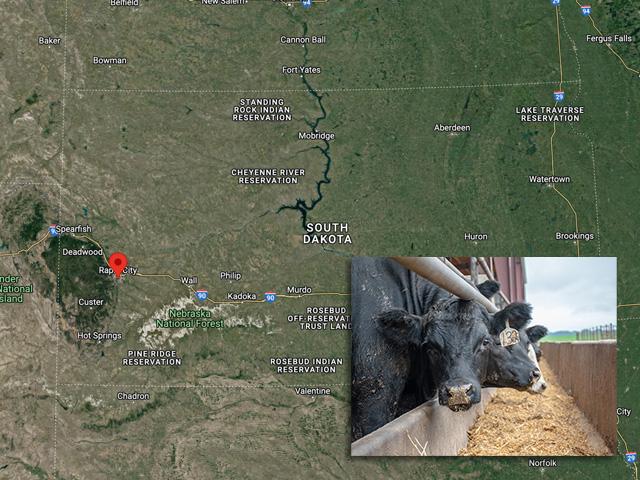