MENLO, Iowa (DTN) -- With a 20-foot stack of distillers dried grains to his side, President Joe Biden told ethanol industry supporters Tuesday that his administration would sign an emergency order to ensure 15% ethanol would remain in fuel pumps this summer.

The president spoke on a blustery afternoon at the 150-million-gallon Poet ethanol plant near Menlo, Iowa about 50 miles west of Des Moines.

Pointing to the DDGs at his side, the president talked briefly about the poultry industry in his home state of Delaware and the value of an ethanol plant to produce co-products for livestock and poultry feed.

"I want to see facilities like this all over the Midwest," Biden said.

EPA is planning on issuing a national, emergency waiver, the White House detailed Tuesday. Without the waiver, E15 is not allowed to be sold around most of the country from June 1 until Sept. 15. But EPA intends to take final action on the waiver before June 1, the White House announced.

With this waiver on June 1, "You're going to be able to keep filling up with E15," Biden said.

EPA has authority to issue emergency waivers from certain rules such as the Reid vapor pressure standard, given certain circumstances in the marketplace, said Geoff Cooper, CEO and president of the Renewable Fuels Association.

"It's our understanding President Biden is using that authority to issue an emergency waiver for this summer," Cooper said. "We still have a need for a permanent resolution when we get into 2023."

Championing his administration's moves on ethanol Tuesday, the president said assuring year-round E15 would lessen reliance on foreign oil and ensure consumers have a choice at the pump for lower-costing biofuel blends. Biden noted the average price for E15 is about 10 cents cheaper than E10 blends.

The president then touted the low-carbon benefits that can come from higher usage of ethanol nationally. The president talked about the aviation industry's moves to produce sustainable aviation fuels with zero emissions.

"You simply can't get to net zero by 2050 without biofuels," Biden said. "So, this industry has a role to play in the sustainable aviation future, but I'm here today about the role the industry can play right now."

Emily Skor, CEO of Growth Energy, said communication needs to continue between the biofuels industry and the Biden administration on the White House goals for the environment, especially reducing greenhouse gas emissions.

Skor added, "The signal the White House is sending today is that it stands behind American biofuels. We want to continue to have that conversation with them."

During a news conference following Biden's speech, Skor said work will continue toward achieving a more permanent solution to maintaining year-round E15 sales. That would take either an act of Congress or through a new EPA rulemaking.

"In the most immediate past few weeks, the attention really across the board was focused on getting the emergency waiver for this summer," Skor said, "because that was the only path for us to be able to have access to E15 this summer.

Skor said a permanent fix would take some time because when the Biden administration was coming into power a little more than one year ago, E15 sales were already allowed year-round. When a federal court threw out the Trump administration rule, it forced biofuel groups to switch gears on industry priorities.

"So, this is something that they only had to start really contemplating and dealing with in July of last year," she said. "And so, it took a little bit of time to really get them up to speed and remind them and educate them on that. When you talk to policymakers, they understand E15 is a no-brainer. So, they understand the value of E15."

Skor said the recent focus on rising gasoline prices and energy independence has led to the "E15 value to really kind of be celebrated a bit more."

The president's actions on E15 and speech in Iowa come as the Consumer Price Index for March showed an 8.5% increase year-over-year -- marking the highest increase since December 1981. Food and energy prices were among the main drivers for the higher prices, and Republicans have blamed the higher inflation on Biden's policies.

Criticized by Republicans over inflation under his administration, Biden on Tuesday said Russian President Vladimir Putin had driven up inflation with the war in Ukraine.

"Putin's invasion of Ukraine has driven up fuel and food prices all over the world," Biden said. The president added that 70% of the spike in gas prices came from "Putin's price hike" on fuels.

The Trump administration first approved year-round E15 in June 2019, but a federal appeals court threw out the rule last July. The U.S. Court of Appeals for the District of Columbia Circuit ruled that the so-called Reid-vapor pressure waiver rule that allowed E10 sales does not apply to E15, even though the Trump administration had concluded E10 and E15 are substantially similar fuels. Reid-vapor pressure essentially is a regulation over the fuel's volatility. E10 has a 1-pound-per-square-inch waiver that has been in place for decades.

EPA has the opportunity to provide a permanent fix, but there have been several bipartisan bills introduced in both chambers of Congress to adopt year-round E15. However, those bills have not gotten out of any committees so far.

NCGA HAPPY WITH THE FIX

Chris Edgington, an Iowa farmer and president of the National Corn Growers Association, said his members were happy over the immediate fix that will take uncertainty out of the market going into the spring and summer driving season.

Standing in front of the DDGs, Edgington touted distilled grains as an aspect of the ethanol industry that often gets lost on critics who claim ethanol simply consumes corn. Edgington pointed to the range of products that can get produced at an ethanol plant.

"We're proud of this product, and it's shipped all over the world," Edgington said. "It's revolutionized cattle feeding in a lot of places, and obviously, pork and poultry and aquaculture utilize it as well. It's not even a byproduct, but it's a piece of the whole process. We get liquid fuel, we get high-quality feed, we get corn oil, we get CO2 (carbon dioxide)."

Noting the pushback from environmentalists over ethanol, Edgington said supporters of electric vehicles are not looking at the mining and production of energy that goes into electric vehicles.

"People haven't been doing that," he said. "They just want to start at the plug-in and say that's it. We've been scrutinized in the corn industry and the ethanol industry from top to bottom, year in, year out."

Edgington added ethanol production has increased by about 6 billion bushels a year since the Renewable Fuel Standard was passed, but only used about 10 million more acres. "We're producing way more corn today than we did 15 years ago, and we still continue to hit every target we need and every market that continues to want more corn. So, it's a great story."

As part of the administration's announcements Tuesday, USDA also stated it would release $700 million to biofuel producers for aid going back to spring 2020 when ethanol demand crashed during lockdown. USDA had announced the funding last year but stated Tuesday that ethanol plants would receive checks by the end of April.

USDA also announced $100 million in new funding for grants to make it easier for gas stations to sell and to significantly increase the use of higher blends of ethanol and biodiesel at the pump. The funding will go for tanks and blender pumps for fuel containing ethanol blends of E15 and greater or fuel containing biodiesel blends B20 and greater. 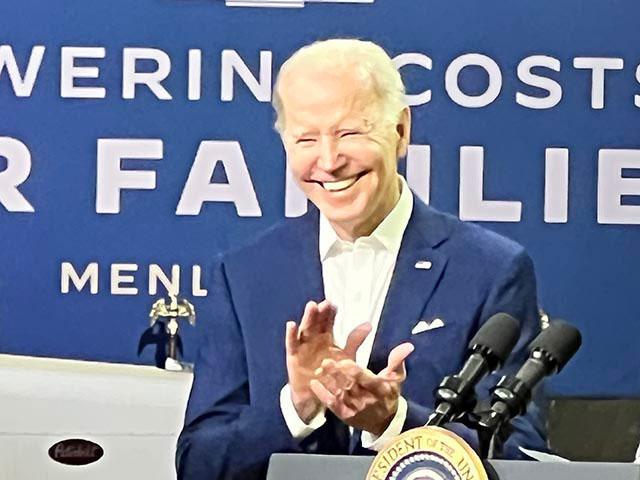