NEW ORLEANS (DTN) -- An EPA official speaking at the National Ethanol Conference on Tuesday committed the Biden administration to supporting higher use of biofuels and to put "biofuel use on a sustainable trajectory of growth" while moving with "urgency" to finalize the Renewable Fuel Standard blend volumes for 2022.

Sarah Dunham, director of EPA's Office of Air Quality, oversees essentially every aspect of the RFS. Dunham noted the Biden administration is focused aggressively on climate change and lowering greenhouse-gas emissions "and that absolutely incudes biofuels," she said.

Though she talked about the urgency of getting the rules completed for RFS blend volumes, Dunham did not offer any timeline on when that would happen.

Ethanol industry group Growth Energy announced Tuesday that following settlement discussions with EPA, the agency has agreed to file a notice in the Federal Register on Wednesday seeking comment on a proposed judicial consent decree that would require EPA to finalize the 2021 and 2022 renewable volume obligations (RVOs) by no later than June 3. Read more about the settlement here: https://www.dtnpf.com/….

While the Biden administration has drawn a lot of attention from biofuel advocates about the focus on increasing electric vehicles or "zero-emission vehicles," Dunham said, "That approach can and needs to include pursuing sustainable and renewable liquid fuels to power the transportation sector."

Looking at the RFS, Dunham said it has been central to developing and expanding the use of cleaner-burning fuels over the past decade, "and I expect that to continue." She said EPA Administrator Michael Regan is committed to "get the program back on track," which includes getting "biofuel use on a sustainable trajectory for growth."

After three years of essentially standing pat, EPA in December proposed blend volume rules for 2020, 2021 and 2022. In drafting three years of rules at once, Dunham said, EPA had to "recognize the challenges of the past few years, including the COVID pandemic, in order to steer the RFS program back on track to the path of responsible growth."

Dunham noted EPA is still going through the comments on its proposed rules, though "We understand the urgency to finalize that rule. We feel the urgency, maybe not quite as much as everybody in this room, but we feel it very deeply to move forward and finalize the rule as quickly as we can."

STATE OF THE INDUSTRY

Geoff Cooper, president and CEO of the Renewable Fuels Association, had offered his "state of the industry" speech just before Dunham spoke. Cooper offered a mixed review of the Biden administration's handling of the RFS, pointing to the move to retroactively reduce 2020 blend volumes, which Cooper said "would set a dangerous precedent" going forward.

Dunham declined to address the proposed cut in 2020 blend volumes in her comments, though she pointed out the proposed 2022 blend volumes adds another 250 million gallons of ethanol use that was remanded from 2014-16 due to a DC Circuit Court of Appeals opinion.

Cooper credited EPA with effectively halting the small-refinery exemptions by the petroleum industry -- including rejecting 65 small-refinery exemption (SRE) requests that would have accounted for as much as 3.1 billion gallons of biofuels. EPA also is reexamining 31 SREs from 2018 that involved 1.3 billion gallons. Cooper said RFA members hope "Some or all of those illegally waived volumes" from 2018 would be restored to the RFS ledger. Cooper said the Biden administration is working to "put a stop to the SRE nightmare."

E15 OPTIONS ON THE TABLE

Dunham said EPA is still looking at "a number of different approaches" to reestablishing approval of year-round E15 after the Trump-era rule was tossed out by a court last year. Dunham said there is a mechanism in the Clean Air Act that could "provide some parity between E15 and E10." She also noted governors can request a waiver from the volatility standards involved. Governors from at least seven states wrote EPA in November about granting such waivers. (https://www.dtnpf.com/…)

While the governors wrote EPA nearly four months ago, Dunham said EPA is "eager" to have direct dialogue with the states about those waiver provisions in the Clean Air Act.

"We are absolutely considering all of these approaches, and they're all on the table," Dunham said.

Speaking earlier, Cooper challenged the Biden administration's attempts to reduce gasoline prices and pointed to the lack of movement on E15. President Joe Biden earlier this month said, "I'm going to work like the devil to bring gas prices down." Cooper seized on that comment to highlight the administration has called on OPEC to increase production and started probes to investigate anti-consumer moves by oil companies as well. The administration also has released oil from the Strategic Petroleum Reserve and discussed the idea of suspending fuel taxes.

Despite what may be happening domestically with oil, Cooper pointed to international situations involving OPEC's moves and the Ukraine-Russia conflict that have helped drive crude oil prices to $93 a barrel on Tuesday. Those situations outweigh what the Biden administration may be trying to do to bring down oil prices, Cooper said.

"We cannot frack our way to low gas price and energy security," he said, referring to the practice of hydraulic fracturing, a drilling process that uses a high-pressure water mixture to extract oil and natural gas from deep underground.

In the meantime, ethanol is about 50 cents lower per gallon than gasoline, and E15 typically sells 10 cents to 15 cents lower per gallons than E10. Yet the administration has not moved to reinstate year-round 15% ethanol blends by allowing E15 to be sold through existing fuel pumps at service stations, Cooper noted.

"The Biden administration could make that happen with little more than the stroke of a pen," Cooper said.

As if looking backward wasn't complicated enough, EPA is now tasked with trying to write the first regulations to set up RFS target volumes after this year, when the law essentially turns the reins over to the agency to reset the RFS. Dunham said the agency will be looking at an array of factors involving the environment, energy supply, rural economic development and the supply of agricultural commodities.

All these factors must consider the broader goals of the RFS to reduce the amount of fossil fuels used in transportation, Dunham said.

Cooper asked Dunham why the agency cannot make a wholesale conversion of the RFS into a national low-carbon fuels standard (LCFS). Dunham said the agency is restrained by the statutes, which are focused on setting blend volume targets instead of simply lowering carbon intensity.

Delving further in the weeds, as EPA prepares for 2023, the agency is starting to revisit its lifecycle analysis of greenhouse gases for biofuels, which hasn't been updated since 2010. EPA will host a workshop next week with the Department of Agriculture and Department of Energy to begin looking at how to tweak its models used for the RFS. 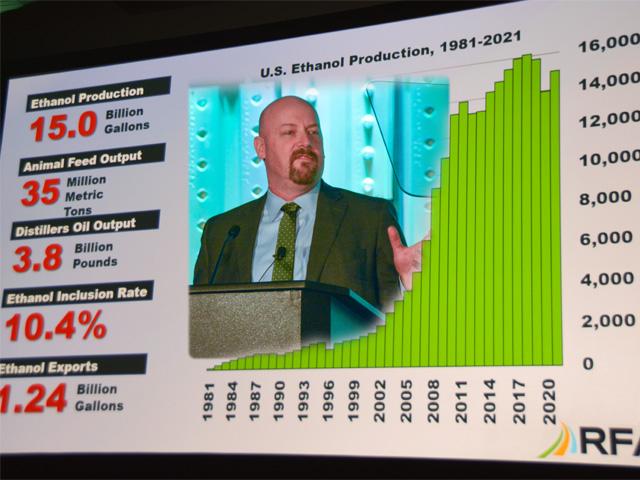