DES MOINES (DTN) -- Ethanol producers in Iowa are coming off one of the strongest quarters of production and profitability in history as demand in the latter part of 2021 was better than anticipated, even with higher corn prices.

Typically, the winter months are slower, but ethanol prices have been higher to overcome strong corn prices. Ethanol producers were somewhat caught off-guard by the demand they saw for fuel toward the end of the year.

"As part of the ethanol industry right now, we're seeing a really attractive margin environment," said Mike Jerke, president and CEO of Southwest Iowa Renewable Energy near Council Bluffs, Iowa. "It's good, and in our business, if you can get through the winter months, the seasonality is such where you are just trying to hold things together, and quite frankly, we're doing much better than just holding things together right now."

Moving into the next quarter, signs remain positive.

"At the end of the day, we're a commodity business. The whole industry will respond to positive margins by producing more. That will also have the effect of bringing those margins back. It will be interesting to see as we move into spring and the driving season, the buildup and if we are able to maintain the momentum."

Dave Sovereign, board president for Golden Grain LLC in Mason City, said margins currently remain good, but not quite what they were during the last four months of 2022.

"Historically, they are at record levels, or at least at the high side of the trends," Sovereign said.

Sovereign and others said the ethanol industry also was able to benefit from some supply chain logistics. Slower train performance in some areas of the country led to higher demand needs for ethanol.

"That's adding to the demand right now," Sovereign said. He added the industry has rebounded dramatically from the pandemic in 2020. "Especially this fourth quarter. Nobody saw that coming. You couldn't have planned for that type of dynamic coming together. That quarter was the best in the history of Golden Grain," which began producing ethanol in 2004.

Golden Grain now is "battening down the hatches" and remaining conservative to lock in production. In 2021, Golden Grain also built the world's largest grain bin, with 2.2 million bushels of capacity, which has allowed the ethanol plant to store more grain and continue producing ethanol during longer holiday weekends and weather storms as well.

"It gave us the opportunity to weather through some of the longer weekends," Sovereign said.

While ethanol producers are seeing strong recent margins, the Iowa Renewable Fuels Association during its Fuels Summit on Tuesday leveled some criticism toward federal biofuels policy and the growing attention being drawn to electric vehicles.

Looking at 2021, Iowa ethanol plants produced a record 4.4 billion gallons -- topping the previous record in 2018 -- and accounting for about 29% of national ethanol production. Iowa RFA calculates that biofuels overall contributed $5.2 billion to Iowa's economy, including $2.65 billion in direct income, much of that tied to farm income.

Monte Shaw, executive director of the Iowa RFA, challenged comments by President Joe Biden and EPA Administrator Michael Regan who have championed biofuels in different ways. EPA's proposals for the Renewable Fuel Standard for 2022 is "great," but 2021 volume proposals are disappointing, and the 2020 levels reopen the final rule and reduce the actual volumes of biofuels blended. Shaw then noted the repeated moves by the Biden administration to champion electric vehicles during the past year.

Devin Mogler, senior vice president of government affairs and sustainability for Green Plains Energy and president of Iowa RFA, said of EPA reopening the 2020 rule, "Not only was it a terrible precedent, but it was unnecessary."

Shaw pointed to another move by EPA in December to announce vehicle mileage standards in which Regan said the agency's goals were "paving the way toward an all-electric, zero-emissions transportation future."

Shaw pushed back on the moves, arguing EPA is ignoring the one federal law on the books meant to reduce greenhouse emissions from vehicles, saying "Biofuels can make a meaningful impact this decade" in lowering emissions.

"There is no magic switch that is going to make all of our vehicles electric," Shaw said. "We're going to need biofuels." He added, "The reality is EVs can't keep up with the wishful thinking of DC politicians."

While the Iowa biofuels industry leveled its criticisms of EVs, moves and investment to electrify the auto industry continue. General Motors on Tuesday also announced nearly $7 billion investments in four Michigan plants to develop electric batteries and build electric pickups, marking the largest-single investment in the company's history and creating 4,000 jobs in the process. The GM announcement was praised by President Biden, who said auto manufacturers are increasingly embracing investments in electric vehicles.

"This announcement is just the latest in over $100 billion of investment this past year in American auto manufacturing to build electric vehicles and batteries," Biden said.

Iowa Gov. Kim Reynolds, a Republican, told the biofuels industry the state will continue defending the investment and infrastructure made in Iowa for biofuels against policy attacks at EPA, whether that involves small-refinery exemptions under the Trump administration, or shifting the 2020 blend volumes under Biden.

"We have to fight, and that is exactly what we're going to continue to do," Reynolds said. "Time and again, EPA under both parties has walked away from its commitment to renewable fuels, and we've had to bring it back."

Rather than rely on EPA to reissue rules for year-round E15, Reynolds reintroduced a bill to the Iowa Legislature on Monday that would require retailers to include E15 pumps in any installation of replacement of fuel storage tanks or pumps by 2026. The bill also expands the state's E15 promotion tax credit from 3 cents per gallon to 9 cents per gallon year-round through 2025. The bill sets standards and incentives for retailers to offer 20% biodiesel blends and E85 blends as well.

Shaw also said a broader group of Midwest states are moving legislation or rules to create year-round statewide E15 in their states. He pointed to a bipartisan letter from eight governors from Illinois, Iowa, Kansas, Nebraska, Minnesota, Missouri, North Dakota, South Dakota and Wisconsin. Governors of the states wrote EPA in November asking for details on how they could each move in that direction.

Reynolds also criticized the Biden administration's focus to champion electric vehicles. Reynolds said the administration is "concentrating all of its efforts to actively eliminate gas-powered cars. And that's a mistake, especially as China looks to lock up precious metals that make the EV batteries." 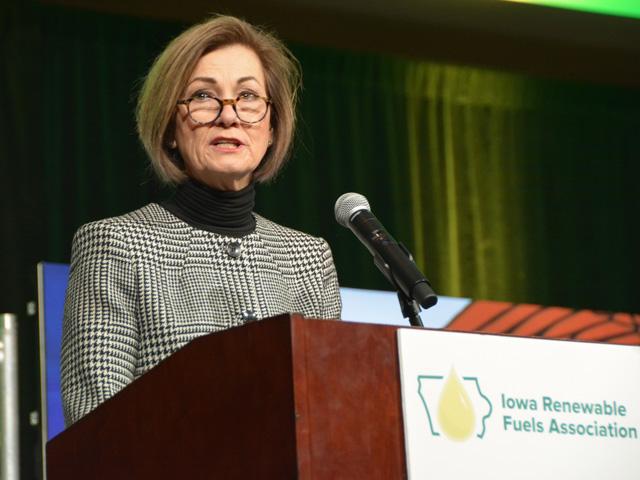