CHICAGO (DTN) -- Despite political challenges involving the United States and China, former U.S. Ambassador Terry Branstad told farmers Monday the Biden administration should look for ways to extend and improve upon the Phase One Economic and Trade Agreement, which is set to expire at the end of the year.

"My advice is to build on the progress that was made in the previous administration, on the phase-one deal, which has been very beneficial to American agriculture. You need to see it enforced and you need to see it expanded," Branstad said.

Branstad was the morning keynote speaker at the 2021 DTN Ag Summit, presenting the speech named in honor of Marcia Zarley Taylor, the DTN/The Progressive Farmer executive editor who was the force behind creating the summit, but passed away in 2017.

The former Iowa governor highlighted the balancing act of agricultural trade with China -- once again the top U.S. destination for commodities -- even though China is now the main U.S. rival on the world stage and its regime is increasingly authoritarian while also pushing military goals in places such as Taiwan.

"As you know, China is our biggest rival in the world. They are the second biggest economy in the world. But they have a lot of mountains and deserts. They can't feed themselves. So, they really need what we produce here in the heartland of America," Branstad said.

Branstad became ambassador to China in 2017, nominated by then-President Donald Trump because of Branstad's long friendship with Chinese President Xi Jinping. As governor in 1985, Branstad hosted Xi and others in Iowa when Xi was a young, county-level executive. In 2011, Xi came back to Iowa as vice president, and Branstad again helped shepherd Xi and a Chinese delegation around Iowa, which included a high-level food and agricultural event in Des Moines.

When Trump was running for president, he said Branstad "can take care of China for us."

The Trump administration went through two years of aggressive tariff battles with China that still includes 25% tariffs on hundreds of billion in products coming from China. The Peterson Institute cites U.S. goods going to China average 20.7% on nearly 59% of all goods exported. The average U.S. tariff on Chinese goods is around 19.7% on roughly two-thirds of all Chinese products that land in the U.S.

One outcome of the tariffs was phase one of the trade agreement with China, signed by Trump in January 2020, has drawn a lot of criticism over China not hitting targets. The Peterson Institute for International Economics cites that as of October, China had only bought 60% of the overall $352 billion expected in overall U.S. products that China had committed to buy.

For agriculture, China will miss its $80 billion target over two years, but as of October China had bought more than $52 billion in agricultural products, elevating China back to the largest single destination for U.S. agricultural commodities.

Branstad pointed to record exports of soybeans, pork and corn, as well as exports of beef after nearly two decades of being shut out of China. Poultry exports have taken off as well. "Although it's not perfect, the phase-one trade agreement has been extremely beneficial to farmers," Branstad reiterated.

Along with its large population and middle-class consumers, Branstad highlighted China will continue to import high percentages of food and agricultural products because of pollution challenges within the country that have damaged its own soils. Consumers there have become reliant on knowing imported foods are safe. Asked about the risks of China again cutting buys from the U.S., Branstad said he doesn't see Brazil and Argentina necessarily replacing U.S. export volumes.

"They need both North America and South America, I believe," Branstad said, pointing to the different cropping seasons. "They are competitors there, no doubt. I think we're going to continue to see Brazil and Argentina as major suppliers to China as well as the United States."

Yet, China's authoritarian tendencies continue. Australia has seen agricultural exports curtailed for vocally questioning the source of the coronavirus. Branstad noted China continues to deny the coronavirus started in Wuhan. Part of the problems that allowed the virus to fester and grow stem from local officials who fear the risks of sharing bad news with Xi and other Chinese leaders.

"It's the problem with their system. The people at the local level don't dare deliver bad news to Xi."

Branstad highlighted some authoritarian moves, including the oppression of the Uyghurs, an ethnic group that has reportedly had more than 1 million people detained to the point they are serving as indentured servants in factories. Protests in Hong Kong also sparked Beijing to eliminate the one country/two-systems approach to Hong Kong, restricting freedom of speech and Hong Kong's judicial system in the process.

Politically, Branstad said one of the next major decisions for the Biden administration will be how to handle the Olympics. Reports on Monday declared President Joe Biden will not send a delegation to China.

And that remains the price of trading with China. "It's a delicate situation," Branstad said. "We have to try to compartmentalize as much as we can. The Chinese consumer, the growing middle class, wants what we have -- a safe, reliable supply of food."

Branstad met with U.S. Trade Representative Katherine Tai in October to stress how important it is to enforce the phase-one agreement. Branstad said the U.S. knows that "getting tough" with China by using tariffs is what worked. He said he's concerned about the pace of movement among the Biden administration's team right now.

"It's hard to know for the Biden administration yet, because they have been very slow to start negotiations," Branstad said.

Looking at other areas of Chinese agricultural policy, Branstad said the lack of information affects an array of areas, right down to a lack of confidence internationally in any agricultural supply and demand information released from its government agencies.

"It hurts their people, but nevertheless that's how they maintain control."

Militarily, Branstad also said he believes Xi "wants Taiwan back under mainland China under his watch" as president. China has become more aggressive in recent years in its stance towards Taiwan to the point China has increased military flyovers. That raises questions about to what extent the U.S. would defend Taiwan.

"That probably leads to war if that's the case. That probably needs to be discussed," Branstad said. "It's of grave concern, there's no question about that." 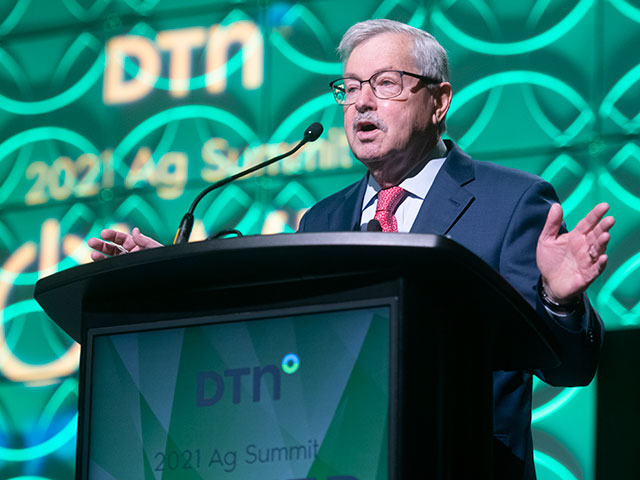