The fate of the legislation, HR 5376, rests with a pair of moderate Democrats, Sen. Joe Manchin of West Virginia and Sen. Kyrsten Sinema of Arizona. Senate Majority Leader Chuck Schumer, D-N.Y., has said he believes the bill will be passed before Christmas.

"Manchin and Sinema hold the power in the Senate because they determine the fate of the bill," McEowen said.

A lot of major provisions involving taxes were cut out of the bill before the House vote. As of now, the bill does not increase the corporate tax rate or make any adjustments to the stepped-up basis rule. The bill keeps the top individual tax rate at 37% and keeps the capital gains rate at 20% as well. There also is no change in the estate-tax exemption, which is set to increase to $12.06 million in 2022 because of inflation adjustments.

"That is reassuring to agriculture," McEowen said of the tax provisions dropped from the bill. He added, "I would say it's not nearly as bad from an agricultural standpoint from what could have been."

In the bill is a provision increasing the cap on the state and local tax deductions (SALT), which are currently capped at $10,000 a year. The bill would increase the deduction to as high as $80,000 for a married couple filing jointly. The provision also would be retroactive to the beginning of 2021. McEowen said this would help people who own a lot of farm and ranch land, particularly in states with high property taxes such as Nebraska.

For large corporations, the bill also sets a minimum corporate tax of 15% on companies with income of more than $1 billion and uses forms filed with the Securities and Exchange Commission (SEC) or other financial statements to determine the income levels of those companies. The Tax Foundation estimates this would affect about 230 major businesses.

McEowen also spotlighted a provision that expands the net investment income tax (NIIT). The 3.8% Medicare tax created in the Affordable Care Act right now taxes passive income such as cash rent. A provision in the bill expands that to also apply to trade or business income not subject to FICA taxes. McEowen said he thinks this provision would have implications for companies that use S-Corps to pass-through income to owners.

"If this passes, then I think we have to do a lot of reevaluation of S Corps for a lot of people," McEowen said.

For farmers who are considered socially disadvantaged or economically distressed, another provision would eliminate outstanding debt on direct farm loans from being treated as farm income.

In biofuels, the bill extends the $1 per-gallon biodiesel and renewable diesel tax credits through 2026 as well. The bill also includes nearly $1 billion for biofuel infrastructure as well.

McEowen touched on other provisions of the bill -- which he alternately described as "garbage" and "goodies" -- not tailored to specific policies. The bill includes language for up to six semesters of free community college; free childcare for children under six years of age; expanded health care for people in states that have not expanded Medicaid; increased Medicare benefits; up to 12 weeks of paid family leave; repeals provisions that would allow drilling in the Arctic National Wildlife Refuge; imposes new bans on offshore oil drilling; and creates a payroll tax credit for local new journalists.

Overall, the Congressional Budget Office estimated the cost of the bill would be nearly $1.7 trillion with a 10-year deficit of $367 billion before IRS offsets are factored in. Still, testifying before the U.S. Senate Banking Committee on Tuesday, Treasury Secretary Janet Yellen said the bill would not increase the national debt due to higher Gross Domestic Product from other investments in the bill.

McEowen raised concerns about the current economic conditions, pointing to the October consumer inflation hitting the highest level in 31 years along with lower third-quarter home sales. With those factors, McEowen said he hoped senators such as Manchin and Sinema would "connect the dots together" and not back the bill.

Regarding inflation, McEowen pointed to the strategy used by Paul Volcker in the late 1970s-early 1980s to dramatically raise interest rates to squeeze down inflation. That strategy worked, but it also had devastating impacts on agriculture, especially land values as the higher interest rates brought down land value.

The strategy among the current Fed leaders has pumped trillions of dollars into the U.S. economy since the beginning of the pandemic, leading to the idea of too much money chasing too few goods -- a classic cause of inflation, McEowen said.

"There is just so much money floating around in the economy," he said.

More details on provisions in the bill can be found at McEowen's blog, https://lawprofessors.typepad.com/… 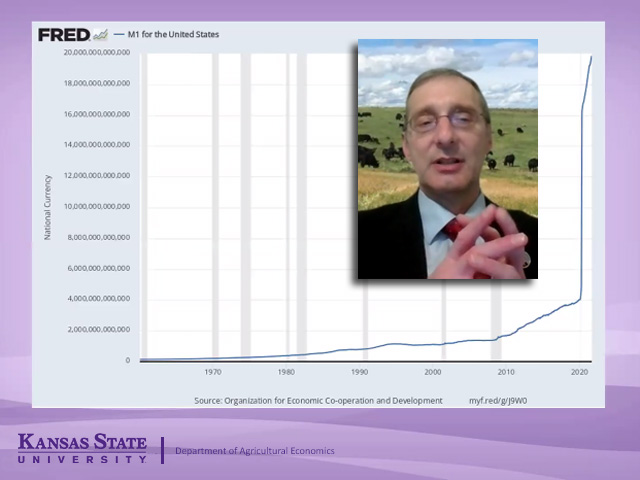