The Iowa Utilities Board this week is wrapping up more than 30 public meetings in counties across Iowa for the Summit Carbon Solutions pipeline proposal, dubbed the Midwest Carbon Express. The pipeline is projected to be more than 2,000 miles long and cross five states in total; more than 700 miles are planned across Iowa.

In Iowa, the public meetings were necessary before Summit could begin holding one-on-one easement talks with landowners. In fact, Summit had land agents at each county meeting ready to discuss easements after the official meetings adjourned. The informational meetings also must be completed at least 30 days before Summit can formally seek a permit; the last scheduled meeting is set for Oct. 22, in Shenandoah, Iowa. Summit also needs survey access from landowners to check for any complications on the ground, such as wetlands, endangered species or cultural sites.

The $4.5 billion Summit project would be a potential boon for Midwest ethanol producers. Summit looks to connect as many as 31 ethanol plants, including as many as 12 plants in Iowa. By trapping their carbon emissions and pumping them into the ground in North Dakota, the ethanol plants stand to capture premiums from low-carbon fuel markets such as California. The ethanol plant and pipeline would split the premium.

The Summit pipeline would also be eligible for a federal tax credit known as Q45 that would pay $50 a ton for captured carbon that is stored permanently.

Bill Couser, a farmer and a board member for Lincolnway Energy, an ethanol plant in Nevada, Iowa, said farmers and the ethanol industry need to be proactive about finding ways to lower emissions, including pipelines.

"Carbon is a real thing, and we've got to figure out a way to put it back in its place," Couser said. "To me, today, this looks like a logical thing we need to at least investigate and pursue."

Couser added, "If we look at progress, if this is part of climate change, then it needs to be done. It's another part of the puzzle."

At full capacity, the Midwest Carbon Express would capture as much as 12 million tons of carbon annually. Summit says emissions sequestered is the equivalent of taking 2.6 million cars off the road annually. Summit's pipeline will cross Iowa, Minnesota, Nebraska and South Dakota before ending up in North Dakota where it will be piped underground in a 200,000-acre site around the Bismarck area. Ideally for the company, permitting would take place in 2022 with construction in 2023 and the pipeline operating in 2024.

Through the right-of-way, Summit expects to lay pipeline up to 24 inches in diameter. Iowa law requires pipeline contractors to keep topsoil separated from subsoil during excavation and replace the soils properly. Summit is looking for 100-foot easements from owners, offering three years of payment for crop damages going from 100% in year one, 80% in year two and 60% in year three, to pay for crops lost during construction.

Beyond paying for potential yield loss, Summit representatives also stress that more than half of Iowa's corn annually goes to ethanol. The pipeline is considered critical for the viability of biofuel plants to lower carbon scores, and thus would be good for farmers and landowners.

When asked about eminent domain potential, Summit representatives repeat they want to work with landowners. The Iowa Utilities Board will be able to give Summit power of eminent domain if the pipeline is considered to serve a public purpose. Iowa Gov. Kim Reynolds also created a carbon sequestration task force that likely will lead to legislation next year to support carbon projects in the state.

Summit is competing with another 1,300-mile pipeline project dubbed Heartland Greenway. Heartland's parent company, Navigator CO2 Ventures, announced last week the company is moving forward to obtain the necessary permits after securing enough investment backing to move ahead with the project. Heartland Greenway will go across Minnesota, South Dakota, Iowa and Nebraska to sequester carbon underground in Illinois. Navigator projects its pipeline will start construction in 2024 or early 2025.

Every state has a different process for how it holds public hearings for pipelines and different regulatory bodies that oversee pipeline permits. In South Dakota, public hearings will be scheduled roughly 50 days after Summit files its permit request. On the Dakota Access Pipeline, South Dakota held four hearings across some of the state's larger cities around the state. Jesse Harris, a spokesman for Summit, said the company is committed to working with the necessary regulatory bodies on the federal, state, county and tribal levels.

"We look forward to continuing to meet with elected officials, county supervisors/commissioners, policymakers, landowners, and other stakeholders to discuss the substantial economic and environmental benefits associated with the Midwest Carbon Express project," Harris stated to DTN.

In Nebraska, such pipelines are overseen by the state's Oil and Gas Conservation Commission and the Nebraska Department of Environment and Energy. It's unclear what public hearings may be held for the pipelines in that state. That was among the issues for landowners who fought against the Keystone XL oil pipeline for more than a decade.

"We're in the same situation we were with Keystone XL," Jane Kleeb, founder of Bold Nebraska, told the Omaha World-Herald. "There's no agency giving a permit, no agency reviewing the health risks and the safety risks."

When pitching easements for Dakota Access, Puntenney said the pipeline was willing to double the price of farmland for anyone who signed an easement, but part of the reason he and others chose to fight it was because there were never assurances the pipeline would be removed from the ground if the company ever abandoned it. Now, he and other landowners who fought Dakota Access continue to suffer from lower yields in the area where the right-of-way was cut through their ground five years ago.

"When they take soil out, they never put it back together in the same way it came out. So that's going to change the soil. The productivity of the soil is going to be changed a great deal," Puntenney said. "When you mix heavy clay with the subsoil, you totally change everything about that subsoil. The pH changes, all the micronutrients change, the fungi and the enzyme mixtures as well. And then they are driving over that area continuously; the compaction with clay created a hardpan."

Iowa State University did a study showing a 23% reduction in corn yield and a 35.5% decline in soybean yield in the right-of-way areas disturbed by pipeline construction in the first year after pipeline construction. Puntenney said he saw a 56-bushel yield decline on acres disturbed by Dakota Access. Then there's the loss of Actual Production History on those acres for crop insurance. "What is showing up for the last five years is we're having significant crop losses," Puntenney said.

Puntenney stressed he's a supporter of ethanol, noting he has five local plants in his area that use on average as much as 140,000 bushels per day. "So, I'm very near to all five of the ethanol plants, and it's a marketing issue for me that I plan for using every year.

"I'm not against pipelines, per se, but what I'm against is tearing up farming land when there are other alternatives such as right-of-way use down county roads or along highways or rail tracks which run right along to the ethanol plants," Puntenney said. "There are other means to do this kind of work other than cutting across farmland. There's a groundswell as more and more people learn about the pipeline and the effect of the pipeline that may hopefully make some adjustments and be more reasonable if in fact they decide to go ahead with the project."

At multiple meetings, farmers asked about how Summit would treat tiling. Jimmy Powell, Summit's chief operating officer, said the company would work with farmers to go around or under tile line, and repair any that are damaged or affected by the construction.

"With 2,000 miles of pipe, I'm not going to say we're not going to screw up, but we will try to get it right the first time," Powell said at a meeting in Mills County, Iowa.

Couser noted he has multiple properties with pipelines already crossing them. Anytime he has had an issue with his property after the construction work, the various companies have always been willing to work with him.

"They are always very upfront about any damages that occur and have always been willing to come back if something needs to be fixed," Couser said. "I understand where the controversy is coming from, but on the other hand, we need to be proactive on this. We don't want the government coming in the future and telling us what we have to do. As long as we have these ethanol plants in Iowa, we've got a market for our corn."

Criticisms have come up at nearly every public hearing. At multiple meetings, people asked why Summit wouldn't share actual profits with farmers. Puntenney said Iowa will allow the liquid carbon to move through more than 30 counties where landowners don't see any of the profits, but outside investors will profit. The state also won't be collecting any carbon tax or other feeds on the carbon moving through the state. Iowa must also prepare all local first responders with training and specialized equipment to deal with leaking liquid carbon dioxide, an asphyxiant, if these C02 pipelines are approved.

"Both the state and landowners should be getting additional financial compensation for the permanent damages to farmland and future lost yields we're going to face," Puntenney said. "These are 'merchant' pipelines and carry specialized unrefined products through and out of Iowa, with no direct benefits to Iowa residents." 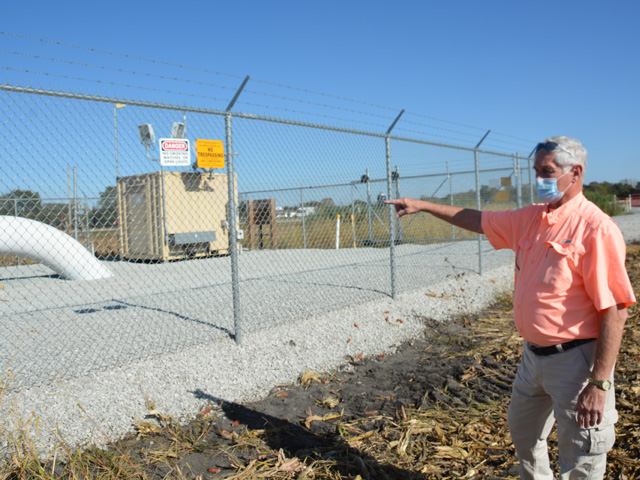