OMAHA (DTN) -- Farmers would get up to $25 an acre from the Farm Service Agency to grow cover crops under $28 billion that would go to USDA conservation programs in the House budget reconciliation package.

"It is potentially transformative, and the emphasis on investments in conservation programs centered on mitigating climate change is a game-changer," said Eric Deeble, policy director for the National Sustainable Agriculture Coalition.

Sen. Debbie Stabenow, D-Mich., chairwoman of the Senate Agriculture Committee, was among those who applauded the amount of money for conservation. President Joe Biden's initial plan had called for $1 billion in agricultural conservation spending. Some conservation groups sought as much as $50 billion in new spending.

"We are leading the way on helping farmers tackle the climate crisis with a historic investment of $28 billion in the Build Back Better budget for climate-smart agriculture -- the largest investment in conservation since the Dust Bowl," Stabenow said. "Our conservation programs are proven and popular with farmers, ranchers and foresters. This will make a huge impact on reducing greenhouse gas emissions and is the equivalent of taking over 142 million cars off the road."

A caveat for the injection of spending in the various programs -- if the funds and budget are approved -- is that the funds would have to be used for conservation practices that mitigate carbon emissions.

The House Budget Committee is expected to meet Saturday to debate budget reconciliation. While Democrats are facing strong criticism from the GOP over the scope and size of the bill, the liberal and moderate wings within the House Democratic caucus have been split as well.

The $28 billion conservation package also was not discussed Thursday when the House Agriculture Committee met to talk about private carbon markets. USDA programs came up repeatedly throughout the hearing, but committee members did not talk about the prospects of how the reconciliation package would play into carbon programs at USDA.

The U.S. Senate passed the Growing Climate Solutions Act on a 92-8 vote after the bill got more than 40 cosponsors. The bill would create a certification program at USDA to provide technical assistance for farmers and forest owners to enroll in a carbon-credit market. USDA would also establish protocols for carbon markets. USDA would provide guidelines to farmers as well for how to qualify for carbon-credit programs. The carbon-credit program would then become "USDA certified." More than 60 agricultural groups backed the bill when it came out of committee.

Rep. Glenn "GT" Thompson, R-Pa., described the bill as creating a "new regulatory regime" as the "government becomes the certifier for the middleman." Thompson pointed out that carbon markets can have complex contracts but are not paying very much yet. Then, Thompson added, "By passing the Growing Climate Solutions Act, Congress is implicitly supporting these minuscule prices."

Making his case about carbon markets, Thompson cited a report from the National Sustainable Agriculture Coalition (NSAC) that the farmers can get $53.41 per acre over five years from EQIP to start planting multispecies cover crops. That breaks down to about $10.68 per acre annually. The practice adds about 0.22 ton of carbon in the soil per year, on average. NSAC says that using Indigo's pricing of $15 per ton, then that farmer would get about $3.30 per acre to adopt cover crops.

Rep. David Scott, D-Ga., chairman of the committee, pointed out that in 2019, voluntary carbon markets paid out $300 million for 100 million metric tons in carbon offsets. Forestry and land use accounted for 37% of the offset transactions. That's $111 million.

Callie Eideberg, director of government relations for the Environmental Defense Fund, said voluntary markets have the potential to reward farmers and ranchers, as well as improve resiliency in rural communities. Working lands can store carbon, but it also is not an easy way to reduce emissions. A strategy to consider is to avoid or reduce emissions from greenhouse gases such as methane and nitrous oxide. Until the science is better, carbon markets should be voluntary but not be used by companies to meet compliance offsets, Eideberg said.

"Until we have a higher level of confidence in environmental outcomes, carbon credits should not be allowed to satisfy current or future compliance obligations, either for companies or for farmers," Eideberg said.

Leo Bastos, senior vice president for ecosystem services at Bayer Crop Science, told congressional members that carbon credits can be an economically efficient way for farmers to reduce greenhouse gases by providing incentives to improve soil health through agronomic practices. This will help yield and improve soil, "which is a big part of their farming business." Bayer signs up farmers for its program, which doesn't require buying Bayer products. Bastos said Bayer's program also pays farmers upfront to make an economic decision to participate in a carbon program. He noted soil carbon standards are still evolving, though, and are being worked on by multiple organizations, which leads to questions about uncertainty.

"We hear from farmers every day that this uncertainty reduces their willingness to participate in carbon markets over whether they can be sure their investment is going to create a verifiable carbon credit," Bastos said.

To deal with that uncertainty, there needs to be some direction and guidance in standards, he said. He then pointed to consideration for the Growing Climate Solutions Act as well.

Jeanne Merrill, policy director for the California Climate and Agriculture Network, pointed to the failed Chicago Climate Exchange, which had more than 3 million acres before it shut down more than a decade ago. "We have tried for 20 years to make carbon markets work for farmers and failed," Merrill said.

California instead has expanded climate-smart conservation programs that are similar to USDA's programs.

Rep. Cheri Bustos, D-Ill., touted a partnership started last month between Indigo Ag and Growmark, an Illinois-based cooperative. Growmark retailers will help farmers navigate through steps needed for a farmer to enroll in Indigo's carbon program. Bustos then asked how Bayer will determine prices in its carbon credit program. Carbon credits in Bayer's program right now range from $15 to $25 per ton.

"As prices increase, we actually share more of that back to the farmer," Bastos told Bustos.

David Milligan, a Michigan farmer and president of the National Association of Wheat Growers, highlighted the diverse regions and climates in which wheat is grown, stressing the problems with one-size-fits-all carbon programs. Milligan also said carbon programs should reward those farmers who already have adopted high levels of conservation practices. Yet, Milligan also raised questions about food security risks if carbon credits change crop decisions or idle ground.

"There seems to be certain crops that might be favored over others because carbon sequester might be better over others. It might reduce supplies. There has been the idea of idling more land," Milligan said.

Rep. Scott DesJarlais, R-Tenn., told the committee that he's a firm believer in the marketplace and doesn't see a government role in carbon credits. Asking Milligan his view, the wheat farmer replied that the government does have a role to play in carbon markets. "Yes, I think there is a place for the government to set some uniformity and some standards," Milligan said.

The issue of paying earlier adopters of conservation practices also came up.

To address the needs for early adopters, Debbie Reed, executive director of the Ecosystem Services Market Consortium, suggested looking at USDA to pay for carbon, a topic that had drawn criticism from Republicans on the committee earlier this year.

"USDA, if they set up a carbon bank, could actually pay farmers from that carbon bank," Reed said.

While the debate in Congress is about using agriculture to offset emissions, farmland is being idled because of severe drought challenges. On Thursday, California Gov. Gavin Newsom, a Democrat, signed a bill with $50 million to idle as much as 750,000 acres of farm ground in the San Juaquin Valley. The bill created a program for farmers to repurpose land to reduce groundwater use. It will affect roughly 15% of farmland in central California. The funds offer options to convert to dryland or rangeland farming, wildlife habitat, or recreation areas, but the purpose is to reduce groundwater irrigation in the basin. 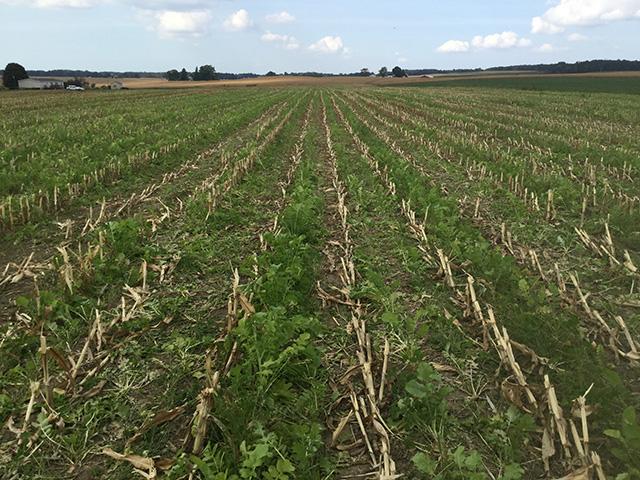