OMAHA (DTN) -- With Congress expected to finish its work on a $1 trillion infrastructure bill in the coming weeks -- and potentially an even larger social spending bill -- that will put a lot of money on the table for rural communities that are set up to get a share.

Yet, a lot of communities struggle to go out and get those funds because they don't have anyone who can write grant applications in a competitive environment. Those communities get left behind.

"There's a lot of available programs out there that aren't being utilized in these rural counties because they don't have someone who can navigate the grant application," said Deena Fisher, dean emeritus of Northwestern Oklahoma State University who became a volunteer grant writer for community services in Woodward, Oklahoma. "It's so needed and that's what I spend a lot of my time working on."

"We're coming up on this huge amount of money," Hernon said. "If you wait a year, you're probably going to miss the bus. We don't know what the final infrastructure bill is going to be like, but this by far is going to be the most money I've seen that can really make a significant dent."

Coming off the American Rescue Plan, federal departments continue to announce grant opportunities. USDA on Thursday announced it will soon request grant applications for $200 million available for two separate programs that will go toward small processing businesses and food markets.

Once the infrastructure bill becomes law, there could be as much as $65 billion available just for broadband funding that will be scattered across multiple federal departments and agencies. Then there will be new money for programs dealing with rural water and waste-water treatment, energy efficiency, renewable energy and other areas such as recreation and tourism.

"You really have to begin, like right now, because you're going to be behind when those grant applications come out," Hernon said.

Hernon helped develop broadband programs in Boston more than two decades before branching out and becoming a broadband consultant. He works with groups such as the Appalachian Regional Commission, a region that stretches from Alabama to New York, to help address the digital divide in rural areas. He reviews grant programs from the area. A lot of communities struggle with grant needs.

"They don't have anyone to do the writing, and they don't understand the 'grants game,' if you will. They don't know that you need to put together a whole program before you can begin writing it," Hernon said.

Curt Covington, senior director of Institutional Credit at AgAmerica Lending, said the decline in rural population reduces influence at state capitols and puts a strain on local communities to find labor, including professionals such as grant writers.

"The grant-writing business has been urbanized in a lot of ways," Covington said. "In the old days, you could always find somebody to write a grant, and you know they may have worked at USDA or in some rural housing enterprise who kind of understood government programs. You go around rural America right now, it's very hard to find grant writers."

FROM RETIRED TO EXECUTIVE DIRECTOR

Fisher went from running a college to being the volunteer executive director for a community food pantry and aid services for people who are homeless in and around Woodward. Yet, Fisher also noted other communities and groups in western Oklahoma often might lack someone with a great deal of knowledge of where to find specific grants to help with remodeling, overhead or staff to run a program. Then, the person designated to write a grant application oftentimes is already an overworked staff member.

"For a lot of people, it's an additional duty to write grants, and then you have to learn that skillset so you can compete with professional grant writers that do it full time," Fisher said. "Those are the things you face. Larger cities have a community grant writer that seeks the kind of grants you want -- whether it's for a museum, a theater, a day center, a food bank, whatever -- and they have the paid time to go and learn more about grant writing."

Wyatt Fraas, farm and community assistance director for the Nebraska-based Center for Rural Affairs, said the pandemic has strapped some rural communities for people and time. They don't have the opportunity right now, despite their own needs, because at least some state or federal grants also had short turnaround times for applications.

Increasingly, some major grant programs help address planning needs by providing grants that can go as high as $150,000, just to help communities "get your act together, bring some partners on board, and build your internal capacity to create a program," Hernon said.

"So, after a year, you are able to come back with a real serious grant application," Hernon said. "That is one potential prospect for some communities."

Fisher is now waiting to hear back about a grant application to turn part of an old warehouse into a day center for the area's homeless. Ideally, the grant will offer a place to help complement a shelter at night by giving a place people can go during the day instead of roaming the streets or trying to find shelter during bad weather. Showing a guest around the building and some of the work being done at the Hope Center, Fisher noted how her retirement project has become essentially a full-time job. She's written grants to develop a mobile food truck that can deliver food to other small towns in western Oklahoma.

"This is all a work in progress. It's very exciting work. I do things on prayers and money," Fisher said.

To keep a food pantry going or start a day care to help the homeless takes a lot of financial resources, she said. "Grants are the best way to do that, but you have to spend the time to write the grants and then wait for the awarding of the grants, and you never get all that you've asked for. So, you still have to go back and convince, or beg, or persuade or whatever term you want to use to get the funds you need to run it correctly." 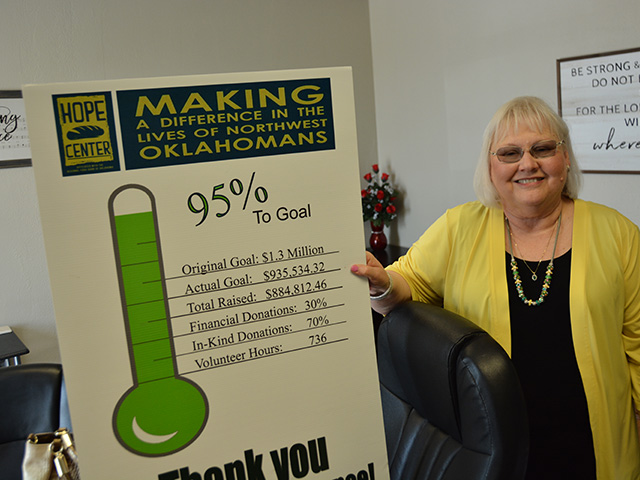