OMAHA (DTN) -- Mike Strain, Louisiana's commissioner of agriculture, told DTN agriculture in his state is "working the problem," in the aftermath of Hurricane Ida, but he spent most of Monday working without communications until those came online in the mid-afternoon.

"We probably have a million people without power in southeast Louisiana right now," Strain said. "There's a lot of destruction to the transmission lines."

Farmers far outside the direct path of Hurricane Ida could face higher diesel prices as they move into harvest, as well as early shipping challenges, depending on the extent of time oil production and Gulf Coast ports are down.

The downed grid affects both power to homes and businesses, and Mississippi River traffic, because the main transmission towers that normally crosses the river ended up in the river, Strain said.

"Right now, what we're trying to do is get the power back on and get the roads opened up, get the infrastructure back in motion so we can get commerce moving again," Strain said.

Strain said it's the highest priority for the Corps of Engineers to get the power lines moved out of the Mississippi River and re-establish movement along the river. Strain said there have been early reports that some ships were grounded, but the full impact there isn't clear at the moment. "The wealth of America moves up and down that Mississippi River so that's got to be dealt with and that is the top priority right now," Strain said.

Strain said most communication was down until mid-afternoon, making it hard to get in reports from several places. The good news, Strain said, was that Ida moved quickly, but he noted it's one of the most powerful storms to come ashore and it gained strength as it moved inland.

The storm also hit LaPlace, Louisiana, the home offices for the Port of South Louisiana, the major export corridor for corn and soybeans and import route for fertilizer and other ag chemicals. Last year, about 1.7 billion bushels (bb) of soybeans and 1.5 bb of corn moved through the port, with roughly one-third to one-half of grain and oilseed shipments coming in the last four months of the year.

Nearly all the major grain companies along the 54-mile stretch of the port have suspended operations. Cargill and ADM offered a status update regarding their grain terminals and operations:

-- Cargill is focusing on employee safety as the area continues to deal with power outages and flood risk, and Cargill noted its employees in Louisiana have been directly affected by the hurricane. A few of the company's salt and animal nutrition facilities are delaying operations but have minimal damage. In its grain business, Cargill stated the terminal at Reserve, Louisiana, "has sustained significant damage." That area of Louisiana is still facing problems with safety and power outages. "We don't currently have a time frame for resuming operations." Power and communications right now are limited.

-- ADM stated the company also is now focusing on making sure its employees and families are safe and accounted for. The company has four grain elevators and port operations in the New Orleans area. ADM also is making shipping arrangements to satisfy its customers' needs, the company stated. "We will assess the damage to our facilities in the coming days as soon as it's safe to do so."

The majority of rice in Louisiana has been harvested, Strain said, with Louisiana as the third-largest rice-producing state in the country.

As far as sugarcane, Strain said there was a lot of wind in the area where most of the sugarcane crop is grown.

"The good news is we have got enough time between now and harvest for that cane to stand back up," Strain said. "I think it will be in pretty good shape, but we don't know for sure because there's been a lot of flooding.

Other crops such as corn in Louisiana have been harvested, but it will take some dry weather to bring down the moisture content or even allow farmers to get back into the fields, he said.

Farmers were more heavily affected in Louisiana than Mississippi or Alabama, but those states also saw extensive rain and high winds.

"We're seeing a lot of rain and wind, but very little damage, said Robert Earl McGehee, a farmer from Brookhaven, Mississippi, and a vice president with the Mississippi Farm Bureau. "We don't have any trees down, or any serious damage, but our power is down. I've talked with farmers from other counties. None of them have any major damage. It's just mostly a lot of rain and lost power."

Jason Schwantz, senior vice president for refined fuels at CHS Inc., noted both gasoline and diesel stocks are already tight. Even before Ida hit, national stocks of diesel fuel were down 6.7% from the prior three-year average. Now, a large number of key refiners are at least temporarily offline.

The national average diesel price Monday morning was $3.28 per gallon, and prices have remained steady for the past month.

"I think the prices are here to stay and may even go up on the diesel side. Gas has actually been more of the problem here lately, so this is definitely going to have an effect," Schwantz said.

Schwantz said he often sounds like a broken record, but he always recommends farmers get their fuel ahead of time to be prepared for the season. That's much better than trying to scramble to find it, and there could be challenges with supply this fall.

"Right now, things are OK, and if they are OK, then it's time to buy so you have that surety of supply when you get to the really busy harvest season," Schwantz said.

Currently, the biggest issue is power, which remains offline in New Orleans and southeast Louisiana along the entire pathway of the Mississippi River bottom.

"We need to see the power get restored so some of these plants can start assessing and see if there's any major damage, and restart," said DTN Energy Editor and Product Manager Brian Milne.

Milne added there was an overnight increase in the futures markets for gasoline and diesel, but the gains were minimal. At the moment, there's a wait-and-see situation from traders. "If these refineries get turned on pretty quickly, in a few days, then it's not too big of an issue," Milne said. "But if they are out for a longer period of time, then obviously, you could start seeing some big drawdowns in diesel fuel and gasoline that will push the market up higher."

While major oil rigs appear to have sustained little damage, reports suggest that some of the largest refineries in the Gulf might suffer prolonged power outages and lengthy infrastructure repairs. The greatest impact is expected in the eastern Louisiana refining and petrochemical hubs from Baton Rouge to New Orleans and potentially to Mississippi. 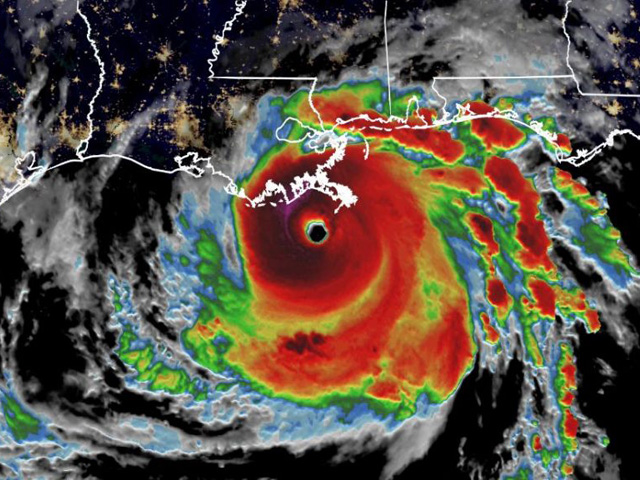