MINNEAPOLIS (DTN) -- Dave Sovereign, president of the American Coalition for Ethanol Board of Directors, opened the ACE annual meeting Thursday making the case that ethanol producers and others need to help consumers "look behind the curtain" when it comes to electric vehicles.

The petroleum industry has been ethanol's major foil in court battles and politics over the past two decades, but the debate over lower-emission vehicles with a push by the Biden administration is leaving biofuel supporters feeling the new president and his team are leapfrogging the low-carbon benefits that can come from biofuels.

"Everyone seems to be talking about electric vehicles," Sovereign said, but he pointed out that right now, less than 2% of the vehicles on the road are electric.

Sovereign, a farmer from Cresco, Iowa, and chairman of Golden Grain Energy in Mason City, Iowa, said everyone wants that "clean, green car" but "sometimes people aren't seeing that a large portion of electricity is being generated by coal." While noting that nearly everyone in the room at the ACE meeting actively promotes the biofuels industry, Sovereign said, "There is probably not a better time or more critical time for us to be active and participating in these low-carbon conversations."

Brian Jennings, CEO of ACE, said to increase demand, the ethanol industry must accelerate efforts to make ethanol part of the climate solution to policymakers and consumers. Pointing to the Biden administration's goal to have an economy at "net-zero" emissions by 2050, Jennings said some in the industry are concerned about the long-term viability of the combustion engine and liquid fuels.

But Jennings said ACE is confident that ethanol is "the best low-carbon alternative to petroleum" and can show meaningful reductions in greenhouse gases.

"In other words, we refuse to concede the climate conversation to electric vehicles," Jennings said.

Climate-smart practices on the farm, more efficiencies at ethanol plants, and capturing biogenic carbon dioxide from ethanol plants all can help improve the carbon intensity scores for ethanol, Jennings said, to not only reach net-zero emissions, but even show "negative greenhouse gas emissions."

Jennings added there are those in the industry who are uncomfortable with all the talk about low-carbon strategies and want to "hunker down" to protect liquid fuels from electric cars. Jennings said that mindset actually plays into the hands of oil refiners.

"We have an opportunity to expand ethanol use by helping decarbonize liquid fuels," Jennings said. "Why would we want to spend our time and resources trying to protect the status quo, which limits our markets to just 10%?"

The infrastructure bill that passed the Senate earlier this month also includes $7.5 billion to help expand electric charging stations nationally. The bill also includes another $73 billion to build out and help upgrade the country's electric grid. Democratic lawmakers also have been pushing for new tax credits for people who buy electric vehicles.

Yet, just a week ago, the White House also called for the Organization of the Petroleum Exporting Countries (OPEC) to ramp up oil production back to pre-pandemic levels as a way to curb fuel prices. That move drew criticism from Republicans in oil-producing states as well as Democrats who want to champion renewables.

While no one from the Biden administration spoke Thursday at the ACE meeting, USDA also announced a $26 million investment to build out biofuel infrastructure with grants in 23 states. The funding under the Higher Blends Infrastructure Incentive Program will go toward dozens of projects to help replace old fuel dispensers and storage tanks with blender pumps and tanks that can be used for both E15 and E85, as well as biodiesel. USDA stated the grants would increase potential biofuel sales by as much as 822 million gallons annually. (https://www.usda.gov/…)

Rep. Angie Craig, D-Minn., spoke Thursday at the meeting, focusing mainly on efforts to pass legislation that would ensure year-round sales of E15. Craig also talked about biofuels being the "here and now" as a way to reduce greenhouse gas emissions as much as 46% compared to petroleum fuels. Craig also stressed that ethanol is an economic driver in rural America.

"Family farmers in my district depend on biofuels," she said. Craig added, "Ethanol drives rural investment, it provides markets for our family farmers, and it helps us address climate change."

Craig said those aspects of biofuels driving down emissions are a focus for her and other Midwest lawmakers as they deal with the infrastructure bill and the budget reconciliation package. Craig said she is pushing for different strategies to get a bill for year-round E15 included in the reconciliation package "along with a significant investment in biofuels infrastructure."

Craig is pitching the argument that year-round sales of E15 can be a budget issue for reconciliation. Year-round sales of E15, driving higher demand for corn, lowers the potential for spending on commodity programs and crop insurance, she said. She is working to get a cost score from the Congressional Budget Office that would reflect how E15 could save on USDA programs.

"We're going to make the case that it's a cost savings to the country," Craig said. "If you have year-round sales of E15, you are going to save money in your crop insurance programs." She added, "We'll see what happens, but we're working every angle in the next few weeks to see if we can get it done."

House Speaker Nancy Pelosi, D-Calif., is calling back House members next week to vote on a resolution for the $3.5 trillion budget reconciliation bill. Pelosi has been rebuffing efforts by moderate Democrats to vote first on the $1 trillion infrastructure package passed earlier this month in the U.S. Senate.

"The process is above my pay grade," Craig told DTN. "I've called for the House to pass the infrastructure bill on a standalone basis and leave reconciliation for a separate process. That doesn't look like it's going to happen."

So, the House may have a procedural vote on the infrastructure bill then kick off the budget process with a separate vote, Craig said.

Craig said agriculture will need to move past some of the issues with electric vehicles because the country will need to move more aggressively with a variety of renewable options. Biofuels will remain a viable part of that. 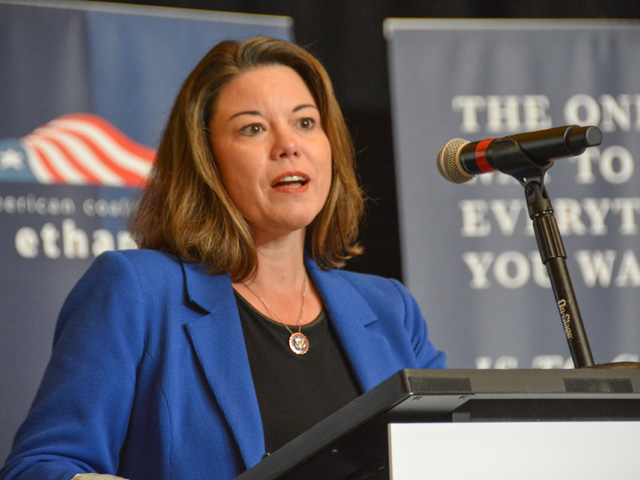