OMAHA (DTN) -- As the U.S. Senate continues searching for some means of balance to pass a massive infrastructure bill, Republicans on Wednesday launched a series of floor speeches, press releases and a letter to President Joe Biden attacking Democratic spending and tax proposals, arguing they would put family farms and ranches in the crosshairs.

The entire GOP Senate caucus joined in stressing Democratic plans to raise capital-gains taxes and eliminate stepped-up basis for inherited assets would be devastating to farmers, ranchers and other family businesses. Democrats continue to focus on passing their infrastructure proposals, but Senate Democrats so far do not appear to have any direct response to the all-out Republican criticism. Democrats have maintained their proposals would not raise taxes on the vast majority of Americans, but would raise taxes on the wealthy.

Senate Minority Leader Mitch McConnell, R-Ky., speaking on the Senate floor, began the criticism by calling Democratic plans "the latest reckless taxing and spending spree" that would lead "a historic set of sweeping tax hikes." McConnell said family farms are in the crosshairs.

"It appears our colleagues' plan will eliminate tax rules that allow family property to be passed down without facing a new devastating tax burden," McConnell said. "Without the fix in question -- the so-called stepped-up basis for capital gains taxes -- scores of family businesses across America could feel a massive squeeze. In states like Kentucky, family farms drive the rural economy. But as I've heard from many of my state's family farmers, it's operations like theirs that are especially at risk."

Sen. John Boozman, R-Ark., ranking member of the Senate, also spoke about the Democratic plans. Boozman was joined by multiple GOP senators who stressed the same message that the tax proposals would put family farmers and ranchers at risk.

"The next generation of family farmers will face devastating consequences if the Democrats have their way, as their proposed changes put the future of nearly 2 million family-owned farm operations at risk," Boozman said. "The president and his allies in Congress will tell you that family farms and ranches will not be impacted by their proposed changes. In fact, they make a very specific claim that 98% of farms will not be impacted."

Boozman was citing a statement made early on by Agriculture Secretary Tom Vilsack, who said that 98% of farms would not be affected by plans to increase taxes on people making more than $400,000 a year. Vilsack also had said farmers and family-owned businesses would not be affected by proposed increases in capital gains, or elimination of stepped-up basis as long as heirs continue to operate the farm or ranch. The tax hikes would affect families who end up selling the farm or ranch.

Boozman noted that he and other Republican senators asked for Vilsack to provide evidence to support that claim. "We essentially asked the U.S. Department of Agriculture (USDA) to show its math. That request has gone unanswered."

The speeches came as Republicans blocked the first procedural vote on roughly $579 billion in new spending that would go to infrastructure such as roads, bridges, broadband and water projects around the country. The vote came as senators continue to negotiate on the final details of a bill as Republicans push for more time to negotiate. The delays come as Democrats want to pass an infrastructure bill before the Senate takes its traditional August recess.

In the background is a second, larger bill Democrats want to pass through reconciliation, meaning it would only require a majority vote to pass. That bill would deal with a variety of social programs and Democrats seem to pitch just about every possible piece of legislation for the reconciliation bill, including immigration reform -- and possible tax hikes and reforms.

DTN reached out to the office of Senate Agriculture Committee Chairwoman Debbie Stabenow, D-Mich., for a comment but did not receive a response.

The latest known details on the president's tax plan for reconciliation is that it would tax unrealized capital gains at death at 43.4% -- up from 23.8% after including the Medicare surtax. The plan would exempt $1 million in assets for an individual, $2 million per couple. This would effectively repeal the stepped-up basis carryover heirs receive from estates. USDA early in this process stated the tax would not be imposed for people who inherit farms, as long as those farms remain in the family operation. At least some rural Democrats have pushed for a full exemption for farms and ranches be written into law.

Sen. John Thune, R-S.D., the Senate minority whip, led a letter released Wednesday signed by every Senate Republican calling on Biden to drop the capital-gains increase, arguing it "would have a devastating effect on multi-generation" businesses, farms and ranches.

The GOP senators wrote, "These businesses consist largely of illiquid assets that will in many cases need to be sold or leveraged in order to pay the new tax burden. Making these changes could force business operators to sell property, lay off employees, or close their doors just to cover these new tax obligations. The complexity and administrative difficulty of tracking basis over multiple generations and of valuing assets that are not up for sale will lead to colossal implementation problems and could also lead to huge tax bills that do not accurately reflect any gains that might have accumulated over time. As you will recall, a proposal to reach a similar outcome by requiring an heir to 'carry-over' the decedent's tax basis was tried before in 1976 -- and failed so spectacularly it never came into effect. It was postponed in 1978 and repealed in 1980."

Thune's news release included a quote from Zippy Duvall, president of the American Farm Bureau Federation. "Passing on the family farm to the next generation is a top priority for many farmers and ranchers," Duvall said. "Eliminating stepped-up basis and increasing capital gains taxes will make it much more difficult, or even impossible, for parents to pass on their farm or ranch to their children. This is a critical tool for America's farmers and ranchers, and we urge all members of Congress to oppose efforts to eliminate it."

Republicans point to a study released by Texas A&M's Agricultural and Food Policy Center last month citing that just two of 94 representative farmers are affected by current tax policy that exempts $11.7 million in assets for individual heirs in an estate, or $23.4 million per couple. Under a bill introduced by Democrats to eliminate stepped-up basis, 92 of the 94 representative farms would carry tax liability averaging $726,104 per farm.

Under another bill that would roll back estate-tax exemptions to $3.5 million for an individual or $7 million a couple -- combined with dropping the stepped-up basis -- the tax liability goes to about $2.17 million per farm.

The Texas A&M analysis can be found at https://afpc.tamu.edu/… 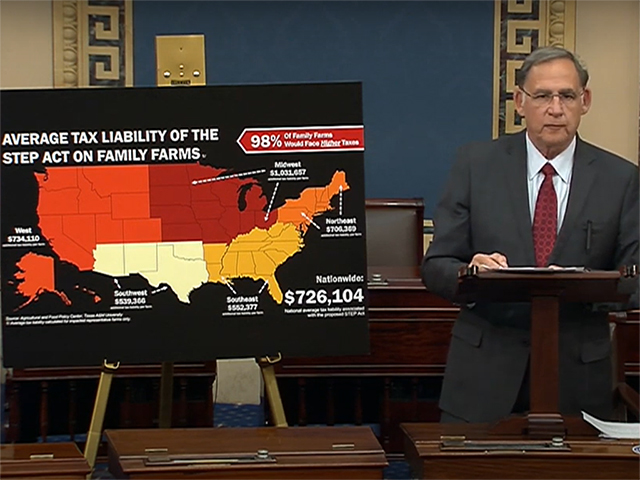