OMAHA (DTN) -- As President Joe Biden was signing his executive order on competition Friday, U.S. Agriculture Secretary Tom Vilsack visited the site of a future packing plant as well as a small locally owned meat locker to announce $500 million in USDA investment to develop and expand meat-processing facilities around the country.

The money, which will go toward grants, loans and technical assistance for smaller packers, reflects a key aspect in the drive at USDA to increase competition in the livestock and poultry industries. The funds tie back to the American Rescue Plan and efforts to increase resiliency in the food supply chain. The funds were one of several related funding announcements that USDA rolled out on Friday.

Vilsack said the funds will become available likely in the fall after USDA takes some time to visit with industry stakeholders about the various ways to distribute the funds and see who becomes engaged in providing matching dollars. The secretary sees the potential for private investment, philanthropy, as well as governors and economic-development leaders that will want to work with producers who would like to expand processing capacity in their local areas.

"That $500 million, I believe, is going to leverage literally billions of dollars in investment," Vilsack said. "And what it's going to do first and foremost is create an opportunity to reverse what is happening today out in the countryside where producers are having to sell their cattle at a loss, only to learn the processors end up taking that cattle and generating a profit."

The federal funding and processor expansion ideally will send a message to major packers that they are not going to have the market power they've had in the past, Vilsack said. It's not in the best interests of the nation to see further industry consolidation or fewer farmers or ranchers, he said.

"What we want is more people on the land," Vilsack said. "We want to maintain and expand our family operations, but when 90% of family operations don't make the majority of their income from the farm operation, something's got to change."

USDA will be looking to highlight different local-processing success stories once the funds start stimulating new processors. The secretary also called on Congress to go beyond the one-time funding for the processing investment and consider making a more permanent program. He called on Rep. Cindy Axne, D-Iowa, to encourage other lawmakers to establish a program and structure to fund similar investments.

Vilsack and Axne began Friday afternoon visiting a soybean field south of Council Bluffs that will become home to a $325 million packing plant that is set to begin construction next spring. Cattlemen's Heritage will start processing cattle sometime in late 2023 and expects to employ as many as 750 people and process up to 1,500 head a day. The secretary then held his news conference with agricultural industry leaders from both Iowa and Nebraska at Rustic Cuts, a small meat locker that opened three years ago in Council Bluffs. Vilsack sought to highlight the potential for producers to market cattle and meat beyond the handful of major packers.

"This is an important day for USDA, and it's very consistent with our focus at USDA on more new and better markets," Vilsack said. "This is an opportunity to see these types of businesses replicated across the country."

Still, Friday's executive order focused on federal agencies drafting new rules surrounding competition in specific areas. For USDA, that includes rewriting at least three major rules for the Packers & Stockyards Act. Yet, a long-standing challenge at USDA for packer-enforcement rules has been the length of time it takes each administration to draft and complete new regulations. Vilsack said he's made it clear USDA will aggressively pursue new rules to improve or change the tournament ranking system that poultry processors use to ensure they benefit producers. It's also important to "draw clear and bright lines" regarding what are unfair practices by packers, he said. USDA also has stressed that it should be necessary to show a violation of the Packers & Stockyards Act has to show competitive injury to the entire industry when it directly affects individual producers.

John Hansen, president of the Nebraska Farmers Union, told the secretary that an ongoing problem with the oversight of packers is retaliation. "It's been a comment that's been made many times, which is we don't really have the kinds of tools that we need in our Packers and Stockyards toolbox to be able to help us go to bat on the behalf of the producers when retaliation has been clearly practiced," Hansen said.

Vilsack said that's why a bright line is needed as to what constitutes discriminatory and unfair practices and also making sure the burden of proof is more balanced toward producers than it is today.

"When you say that to prove a violation that you have to prove the entire industry has been impacted, well that's a virtually impossible standard to meet," Vilsack said. "That's not the standard -- should not be the standard -- to give producers a fair shake."

Mark McHargue, president of the Nebraska Farm Bureau, asked Vilsack about the size limit or scale on the funds going to an individual plant. Like Cattlemen's Heritage in Iowa, McHargue noted a group in North Platte, Nebraska, has started developing a plant called Sustainable Beef that will be similar in processing capacity as well.

"Anything we can do to increase shackle space is a good deal," McHargue told DTN. "The money Vilsack was talking about today, for that particular size and efficiency, that sort of thing, if we can get some of these new plants up and running, I think that's going to go a long ways."

Aaron Lehman, president of the Iowa Farmers Union, said the funding and the rule changes on competition combined will benefit farmers of different sizes. "This is a really huge deal," he said.

Jake Driver, one of the owners of Rustic Cuts, hosted dozens of people at his small meat locker. He said he and his partner, Rick Larson, opened the retailer nearly three years ago to sell meat specifically because of some of the issues Vilsack highlighted Friday.

"We wanted to have the ability to control what we were getting, and we own the cattle from start to finish," Driver said. "There are not too many people who can say that. And people want it, and I'd like to be able to help expand and see what kind of ways we can benefit from what is going on now."

For more details about the president's executive order and some of the impacts, visit these links: 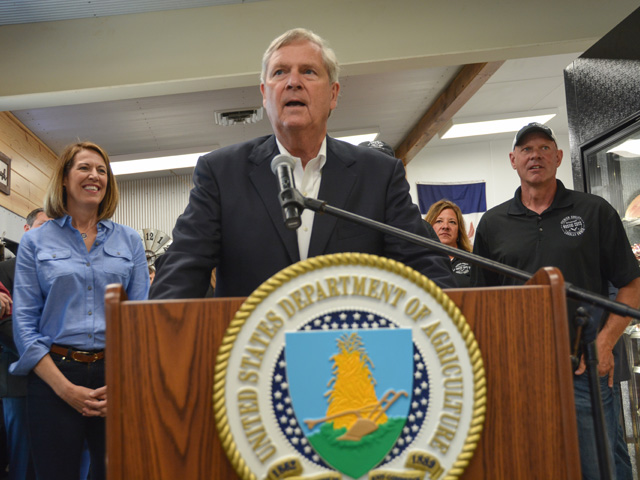